Typhoons across east Asia have left at least 70 people dead, with rescuers in Taiwan still seeking survivors of a mudslide that may have buried over 100 villagers.

A total of 50 deaths have so far been confirmed in Taiwan and at least 158 others are listed as missing, after Morakot unleashed the island's worst flooding in half a century.

The storm lashed Taiwan with 3m of rain over the weekend, submerging streets and bringing down bridges.

In Pingtung county in southern Taiwan, thousands of people remain trapped in three coastal townships without electricity or drinking water.

At least six people are confirmed dead in China where over 1 million people were evacuated from coastal areas ahead of the storm.

In the east of the country, a massive landslide triggered by torrential rain toppled seven four storey buildings in Pengxi in the coastal province of Zhejiang. There were at least two confirmed deaths.

The Chinese civil affairs ministry said more than 6,000 houses had been destroyed in coastal areas.

In Japan, Typhoon Etau has left at least 14 people dead and 18 others missing.

The storm, with winds of up to 126km/h, moved in hours after a 6.4 magnitude earthquake in the region.

Japan's weather agency has warned of possible landslides and flooding, stressing that the water-soaked earth may be unstable after being jolted by the strong tremor.

Heavy downpours have drenched Japan since the weekend and caused flooding in the worst-hit city of Sayo, where 13 deaths were reported after a swollen river burst its banks.

The typhoon had originally been forecast to veer close to the densely populated region around Tokyo.

It is now moving out over the Pacific Ocean and veering east and away from Japan's coast. 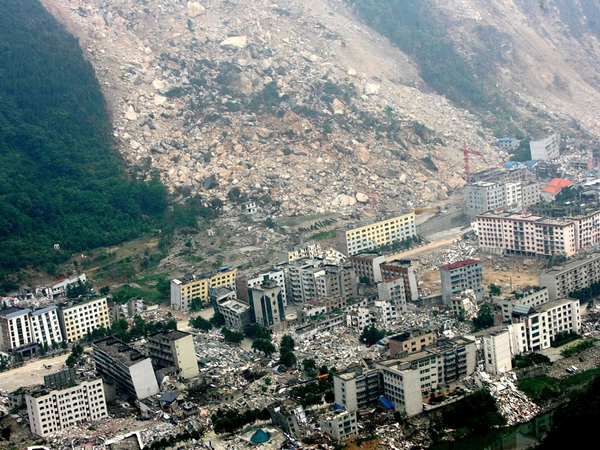