A spokesman for the Guardian Council also said the 12-member body had begun a 'careful examination' of a total of 646 complaints submitted in connection with the 12 June poll.

President Mahmoud Ahmadinejad's main challenger in the election, Mir-Hossein Mousavi, has called for the election to be annulled.

The council has said it is ready to recount disputed ballot boxes but has ruled out cancelling the election result.

Iran was earlier accused of arresting two top elderly dissidents in a massive crackdown on the opposition.

Ebrahim Yazdi and Mohammad Tavasoli, veteran revolutionaries and leaders of Iran's Liberation Movement, were arrested yesterday, according to newspaper reports.

Some reports said Mr Yazdi had been detained at a hospital emergency unit.

Iran has also rounded up scores of reformists including high-ranking former officials and journalists since protests erupted over a landslide election win for Mr Ahmadinejad was announced.

Hundreds of protestors have been detained in Tehran and in other cities.

Mr Yazdi, who heads the banned Freedom Movement, was foreign minister in Iran's first government after the 1979 Islamic revolution that overthrew the US-backed shah, but was sidelined as religious hardliners took control.

Tens of thousands of supporters of Mr Mousavi held a new protest rally in Tehran.

Mr Mousavi himself joined the crowd, most of whom were dressed in black as a mark of mourning, which was a gesture the defeated candidate had called for.

The protesters carried pictures and placards bearing slogans in support of Mr Mousavi.

Mr Mousavi joined the rally in the capital's Imam Khomeini square despite warnings from the hardline Basij militia for defeated candidates to dissociate themselves from 'the rioters'.

Foreign media are barred from covering such events under restrictions imposed since the wave of public anger took hold in Iran, exposing deep divisions in the nation.

At least seven people have been killed and many more injured in the worst violence for at least a decade, with protests reported not only in Tehran but also in other major cities across the country since polling day. 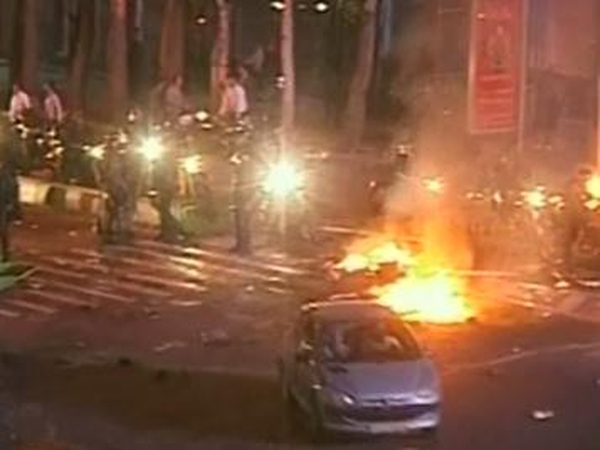