The Italian government has requested EU aid to help cope with the deadly earthquake there this week.

A European Commission spokesman said Italy has 10 weeks to say how much the damage is. The funds can be mobilised quite quickly once they have received the information, he said.

Rescuers spent a second night last night searching for survivors of the earthquake which killed at least 260 people including 16 children in central Italy.

Relatives are preparing to bury the first of the dead killed in Monday's 6.3 earthquake.

Thousands of survivors of Italy's worst quake in three decades passed a night in tent villages as a series of strong aftershocks hit the mountainous region of Abruzzo, hampering rescue efforts and causing at least one more death.

The strongest tremor since Monday's quake toppled buildings, including parts of the basilica and the station, in the city of L'Aquila, which bore the brunt of the disaster in the early hours of Monday.

L'Aquila's mayor said the 5.6 magnitude aftershock left one resident dead. A 76-year-old Roman man was reported to have died of a heart-attack.

Prime Minister Silvio Berlusconi has declared a national emergency and sent troops to the area. Rescue workers have also set up 20 tent camps and 16 field kitchens to provide hot food and accommodation for up to 14,000 people.

Hundreds of emergency workers, many of them volunteers, have been using mechanical diggers and their bare hands to remove piles of rubble in L'Aquila and nearby villages devastated by the quake.

The death toll rose steadily throughout yesterday but rescuers burst into applause when a 20-year-old girl was found alive 42 hours after the quake in the ruins of a four-storey building.

Some 1,000 people remain in hospital, about 100 in serious condition, and fewer than 50 are missing.

Pope Benedict has said he intends visiting the victims of the earthquake soon.

'The Pope shares your pain and your worries,' he said during his general audience in St Peter's Square. 'I hope to visit you as soon as I can.' 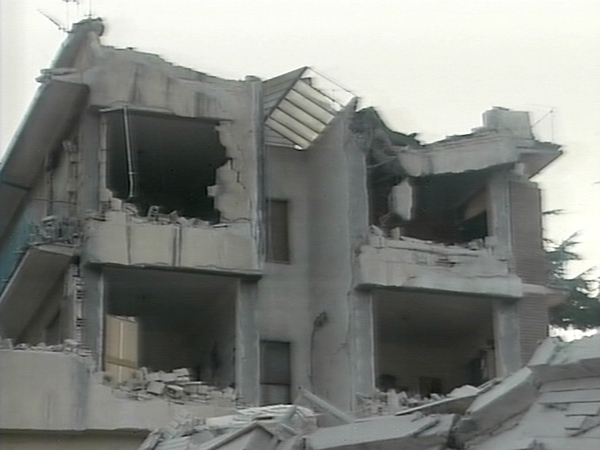