Sinn Féin Presiedent Gerry Adams has called for a realignment in Irish politics to create a united progressive and democratic movement to bring about real change.

In his address to the party's Ard Fheis in Dublin, Mr Adams said it was time for Brian Lenihan to do his patriotic duty and go, saying he should bring the rest of the Government with him.

The Sinn Féin leader called for a new three year job creation strategy to help turn the economy around, as well as an end to what he called ‘obscene’ salaries paid to senior politicians and public servants.

He called for a new alliance for change to provide an alternative to Fianna Fáil and Fine Gael, saying he invited potential allies, including Labour and the Greens, to join in securing real change.

Mr Adams said the progress achieved in Northern Ireland proved that everything is possible - though he acknowledged that sharing power with the DUP is both difficult and challenging.

Earlier, delegates passed an emergency motion criticising the public service pension levy and calling for it to be reversed.

Another emergency motion called for a cap on the salaries of bank executives as well as the amalgamation of Bank of Ireland and AIB as a public bank.

The economy and the EU dominated this morning's session of the Ard Fheis in Dublin with the party reaffirming its opposition to the Lisbon Treaty.

The delegates heard strong criticism of the Government's handling of the banking crisis.

They called for the establishment of a new payment scheme for unemployed mortgage holders in which interest payments are suspended until new employment is found.

Party members have also urged that householders be given provisions to safeguard against home repossessions.

Aengus Ó Snodaigh TD criticised the Government for wasting away the Celtic Tiger.

He said no home should be repossessed, except those of banker Brian Goggin and businessman Ulick McEvaddy.

Deputy Ó Snodaigh told the Ard Fheis that their homes should be 'nationalised'.

He said there should be a property tax on second homes in Ireland and abroad to pay for affordable housing.

SF TD for Louth Arthur Morgan has launched a stinging attack on the govt's handling of the banking crisis.

He said despite the rising number of unemployed he would like to see the bankers, the 'so-called regulators', and the members of the Government join the dole queue.

He said fundamental changes to the banking sector can only be achieved when the state stands up to what he called was the 'banking mafia'.

He described Anglo Irish Bank as a 'toxic cesspit' and said for too long banking executives were let away with reckless lending.

Meanwhile, TD Caoimhghin Ó Caolain told delegates that the unification of Ireland is the party's core and primary objective.

He added that re-unification was in the best interest of all the people on the island and said he believed it would happen 'in our lifetime'.

MEP Mary Lou MacDonald called on the Government to publish the legal binding guarantees it secured from the EU on changes to the Lisbon Treaty.

Speaking this morning at her party's Ard Fheis, she said it was her firm belief that when the referendum is re-run, the people will be asked to vote on exactly the same treaty with exactly the same problems.

She said if voters' concerns are to seriously addressed, a new treaty will be required. She said Lisbon was neither responsible for our economic woes, nor will it solve them.

ve been secured by the Government.

She said she was not willing to take assurances from, what she called the 'same snake oil salesmen who sold us Sean Fitzpatrick's debts’.

Earlier, TD Aengus Ó Snodaigh urged the Government and the EU to impose a trade embargo on Israel.

Delegates are likely to approve motions calling for an all-Ireland economic initiative and opposing the re-running of the Lisbon referendum. 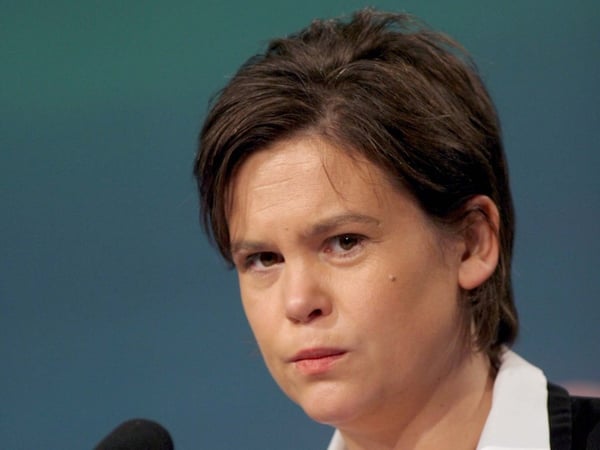