The Taoiseach Brian Cowen will be among the Eurozone leaders who are to meet in an emergency summit in Paris on Sunday to draw up a joint action plan to tackle the financial crisis.

The French President Nicolas Sarkozy's office made the announcement tonight.

EU heads of state and government are due to hold a regular summit in Brussels next Wednesday, but the speed and ferocity of this week's market meltdown has forced the leaders to react faster.

The summit will also bring together European Commission chief Jose Manuel Barroso and Jean-Claude Trichet, president of the European Central Bank, according to the French President's office.

'The meeting's objective will be to define a joint action plan for the eurozone and the European Central Bank in relation to the current financial crisis,' the statement said.

The summit is scheduled to begin at 6pm at the Elysee Palace in the French capital.

Spanish Prime Minister Jose Luis Rodriguez Zapatero had earlier called for an emergency meeting of Eurozone leaders to come up with a coordinated response to the crisis.

The Central Statistics Office reports the numbers employed in the building sector in August almost 18% down on the same month in 2007.

The figures confirm a trend that began in April 2007.

Meanwhile, the volume of retail sales fell by 6% in August compared to the previous August. The retail figures are the worst since early 1984.

The CSO noted falls in spending on DIY and home furnishings.

Both sets of figures are leading to calls on Minister for Finance Brian Lenihan to re-invigorate the economy in next week's Budget.

Wall Street shares plunged in opening trade this afternoon as panic selling spread around the globe.

A volatile session on Wall Street ended with relatively modest losses after a meltdown in global markets and wild swings for US indexes.

The main European markets ended the week between 6% and 8% down. The FTSE Index endured its worst week since the Black Monday crash of 1987, losing 21% over the week.

Trading was suspended in a number of markets around the world.

The Nikkei index in Tokyo earlier closed down 9.6% and the Hang Seng index in Hong Kong closed down more than 7%.

In Bangkok, the exchange suspended trading at the start of the afternoon after a sudden 10% fall.

US President George W Bush says his government will move aggressively to address the financial markets crisis, but acknowledged that anxiety was feeding on itself and sending stocks plummeting.

Mr Bush outlined what he called measures that 'will have maximum impact' that are being taken to address the financial crisis.

He warned that anyone caught dealing in illegal financial activity would be prosecuted.

He also said the Treasury Department would work quickly to implement the $700bn financial sector rescue plan approved a week ago.

A meeting of finance ministers and central bankers of the G7 nations got under way this evening at the US Treasury Department.

Mr Bush has also invited the finance ministers from the G7 group to the White House tomorrow for a special meeting.

The continuing fall in the stock markets and the freeze in credit markets have raised doubts over whether the US Treasury's plan to buy up banks' bad mortgage backed assets is enough. It is now considering pumping money directly into banks.

In Moscow, the Duma has approved two anti-crisis packages worth a total of €63bn.

The packages include making available €37bn of state money to banks and companies who need to refinance foreign debt, and giving 950bn roubles (€27bn) to Russia's key banks. 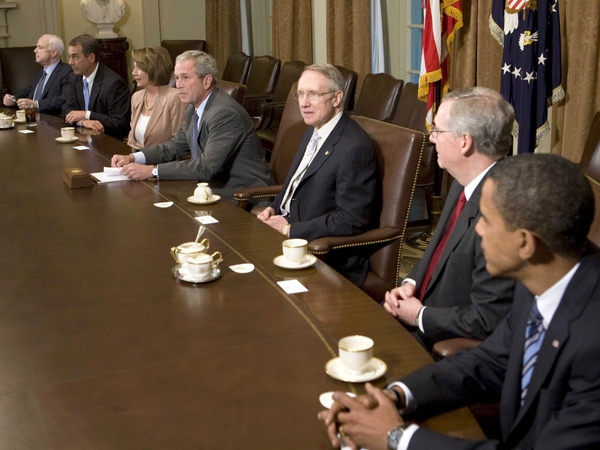