Finance Minister Brian Lenihan has outlined a package of measures aimed at saving €440m in public spending this year.

Mr Lenihan said all Government departments other than Health and Education will be required to reduce their payroll bill by 3% by the end of 2009.

The Minister has also put on hold any more acquisition of property for the decentralisation programme. Pay increases due to Ministers, senior judges and civil servants will not go ahead, but this will be reviewed in September 2010.

The costs of tribunals will be reviewed so that expenditure is minimised. Minister Lenihan says the Government is hoping to save €440m in 2008 and €1bn in 2009.

He also said spending on consultancy, advertising and public relations would be cut by at least 50% in 2009, and significantly curtailed for the rest of this year.

State agencies will be reviewed to see if they can share services or amalgamate or be abolished, Mr Lenihan said. The review's outcome is to be considered in the autumn.

He also announced savings of €45m in Overseas Development Aid in 2008. The Departments of Finance and Health and Children are to draw up a scheme to reduce surplus staff in the HSE as soon as possible.

All departments have also been told stay within annual budget. Mr Lenihan said the cuts were aimed at protecting the vulnerable and were the minimum required.

The Cabinet met earlier today to agree the measures. On his way into the meeting, Mr Lenihan said that he had very constructive talks to agree the cost-cutting measures. More savings are expected in December's Budget.

Fine Gael leader Enda Kenny has said he welcomes some of the measures announced by the Finance Minister.

Mr Kenny told the Dáil he particularly welcomed the cuts on advertising and consultants as well as the pausing of the ministerial pay increase.

However he said the document appears to be cobbled together in an ill thought out fashion. He says it was the consequence of mismanagement, and said the present administration was the worst government of the last 50 years.

Labour Leader Eamon Gilmore said the measures equate to 'back of the envelope book keeping'. He said the plan was full of headline-grabbing measures designed to restore confidence in the Government rather than in the economy.

He says there is nothing in the plan for the 54,000 people who have lost their jobs in the last year. Deputy Gilmore also said that there are some prudent measures included and pointed to the pause in the ministerial pay awards.

Reacting to the measure on overseas development, Ireland's largest aid agency Concern said it regrets the cutback of €45m, while Goal's John O'Shea said the move would result in lives being lost unnecessarily.

Mr O'Shea said it sent a 'shocking message to the poorest of the poor' who would not understand 'why the life raft is being pulled away from them'.

There will be no debate on the cuts in the Dáil today, apart from the brief questions that were part of Leaders questions at 16:15.

The Dáil debate on the cuts will begin at about 11.30am tomorrow. 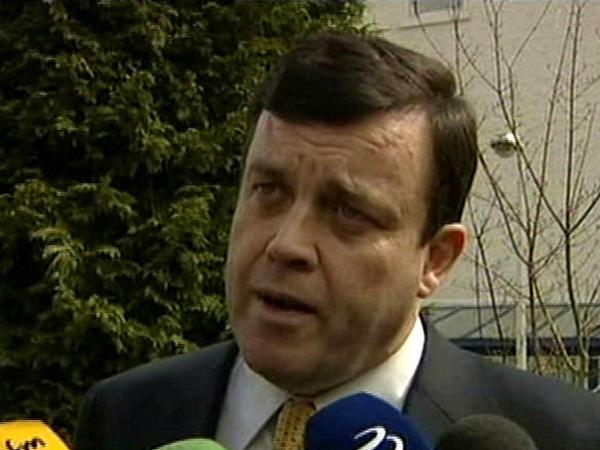