Former Taoiseach Bertie Ahern has denied that he bought his Dublin house in the name of a Manchester businessman.

Mr Ahern told the Mahon Tribunal he had no idea that businessman Micheál Wall had made a will leaving him the house. Mr Ahern said that did not make any sense.

He said he had a loose agreement with his friend Mr Wall about the house in Beresford Avenue, Drumcondra, that Mr Wall would buy the house and Mr Ahern would rent it from him.

There was an understanding that Mr Ahern could buy it if he really liked it. Mr Wall told the tribunal the agreement also meant he was able to stay in the house when over in Dublin but could not describe any particular occasion.

Today Mr Ahern said Mr Wall did remember he just did not want to be asked about what bedroom he stayed in.

Henry Murphy SC asked about Mr Wall's will made in 1996 in which he left the Beresford property to Mr Ahern in the event of his death or to Mr Ahern's daughters if he predeceased Mr Wall.

Mr Ahern said he only found out about the will last year and said he would not have been able to accept the house if Mr Wall had passed away.

He said Mr Wall told him he wanted to make sure that Mr Ahern had a chance to buy the house if he died. But Mr Ahern said there were other ways of doing that and it did not make any sense to leave it to him in a will.

Mr Ahern agreed it would make sense if the house had been bought with his money. But he denied a suggestion by Mr Murphy that this is what happened and said he was 100% certain it was bought with Mr Wall's money.

Mr Ahern said a number of lawyers, some of them now judges, were involved in the sale of the house to Mr Wall and Mr Ahern's purchase of it two years later.

Mr Ahern said it was a very strange suggestion to say these lawyers got it wrong and that he owned it.

Earlier, he told the tribunal that his lack of permanent accommodation in the 1990s was used as a political 'hit' against him.

Mr Ahern said he was living above the St Luke’s constituency office from 1992 to 1994.

During a leadership contest, a ministerial colleague had said you could not elect someone Taoiseach if nobody knew where he lived.

Mr Ahern said his mind turned to getting a house after his separation was finalised in November 1993.

He agreed that in 1994 he had £70,000 in savings, was Minister for Finance and could have taken out a mortgage for a house. But he entered into an agreement to rent a house from Mr Wall.

Mr Ahern said he knew he had to get out of St Luke’s and buy a place but he was not rushing. He said he was busy as Minister dealing with the currency crisis. 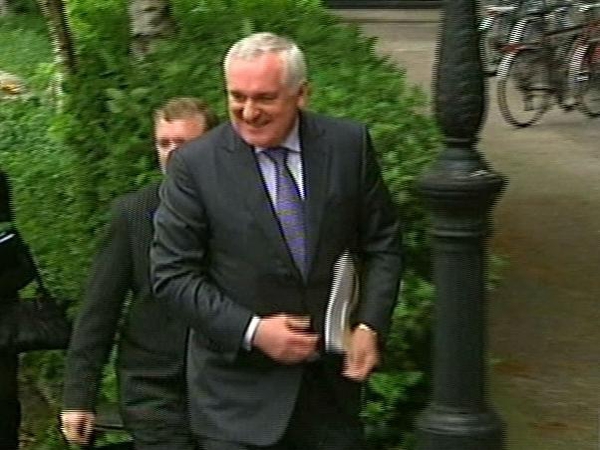