Fishermen meeting in Cork who had blockaded the city's port since yesterday have warned that the blockades have been stood down only for the present.

The Federation of Irish Fishermen is due to meet the Minister for Agriculture and Fisheries Brendan Smith and Junior Minister Tony Killeen in Athlone on Friday.

Fishermen have called for financial aid for the hardship in the industry, an end to the forced dumping at sea and more respect from the Government and State agencies for the industry.

About 200 skippers and fishing boat crews drew up a list of their demands for Friday's meeting in Athlone.

Amongst them: financial help for the hardship in the industry, an end to forced dumping of fish catches at sea because there are not quotas to land them and more respect from State agencies for the fishing industry.

They also discussed representation at Friday's meeting. They made it clear that their action in blockading the ports has been 'stood down' for the present as they put it, but not necessarily never to take place again, depending on what happens at Friday's meeting.

The fishermen are demonstrating against rising fuel prices, low quotas and heavy enforcement of fishing regulations.

Two container ships stuck in Cork Port since yesterday due to the blockade have now left the harbour. They were led out by the Cork Port Tug and the Cork Harbour Pilot Boat.

As they approached the blockade in the navigation channel the trawlers moved aside and allowed the two container ships to pass through. They were followed by two smaller cargo ships.

Preparations were being made to get a tanker that was anchored around 1.5km from Cork harbour into the White Gate Oil Refinery.

A long line of trawlers has moved back towards the Cork city quays and to other jetties in the port area and shipping operations are no longer being affected.

On RTÉ Radio's Morning Ireland, Mr Smith said he and Mr Killeen had agreed to meet the FIF when they last met fishermen.

A container ship was prevented from entering Waterford Port and Cork Port said its shipping schedules were badly affected.

The Irish Association of Seafood Companies, which represents 90 processors and retailers, has criticised the action of the fishermen, as unhelpful and called for unity in the industry. 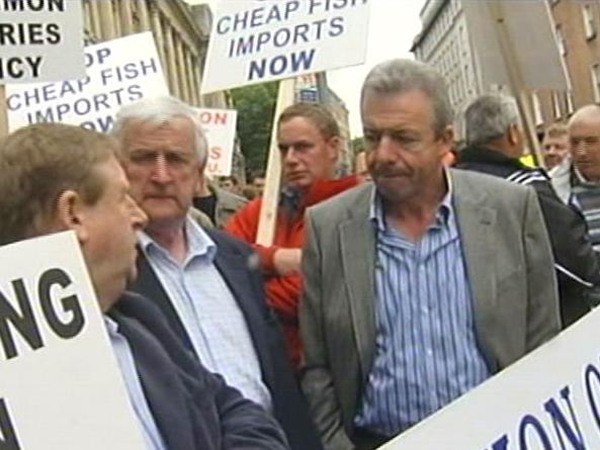