The Garda Commissioner has apologised to those mistreated in garda custody during the investigation into the death of Raphoe cattle dealer Richie Barron.

The latest report published by the Morris Tribunal has found that gardaí arrested and unlawfully detained several people during the investigation.

In a statement, Commissioner Fachtna Murphy said members of the force who do not observe professional standards do a 'grave disservice to the history and tradition of An Garda Síochána'.

The statement said Mr Murphy fully accepts the report's findings. Commissioner Murphy said this afternoon that he is deeply disappointed that some members of the force were not 'forthright' in their dealings with the Morris Tribunal.

He said the 'significant failings' identified in the report are being addressed. An extensive modernisation and change programme is under way and he said revised guidelines on the rights and protection of people in custody had been issued to all members in recent months.

Former Minister for Justice, Brian Lenihan, said some gardaí involved in the investigation acted unprofessionally and unlawfully, and that their behaviour had no place in a professional police force.

Fine Gael has criticised the timing of the report's release, saying it is highly questionable it is being released on the same day a new Taoiseach is being elected.

The Morris Tribunal published its latest report this afternoon. It is available on the Department of Justice website.

In it serious findings are made against a number of gardaí.

The tribunal has been inquiring into alleged garda corruption in Co Donegal since it was established and has heard a total of 686 days of evidence.

The latest report examines the circumstances surrounding the investigation into the death of Mr Barron.

It finds that several people were mistreated in garda custody - verbally and in some cases through physical abuse.

The tribunal states in its report that it does not accept the evidence of several garda members who gave evidence.

The tribunal finds that allegations that gardaí secretly recorded interviews between solicitors and their clients at Letterkenny Garda Station are false.

A number of recommendations are made in the report. They deal mainly with how improvements could be made to interviews in garda custody.

The tribunal's sixth report will now be consider by the minister and the garda commissioner and will be discussed in the Dáil.

Background to the tribunal

The tribunal was established by the Oireachtas in 2002 following allegations and complaints concerning some gardaí of the Donegal division.

Mr Justice Frederick Morris, a former President of the High Court, was appointed the sole member of the inquiry.

Judge Morris has already issued a number of reports.

In July 2004, he found that Inspector Kevin Lennon and Detective Garda Noel McMahon attempted to further their careers through their dealings with the self-professed IRA informer Adrienne McGlinchey, and invented evidence of an arms find, and that their superior officers were negligent.

In a report on the death of Richard Barron and related matters the following year, he found there was gross negligence on the part of senior officers and other members of the Garda Síochána.

Reports in 2006 on the garda investigation of a supposed arson attack at Ardara, Co Donegal, in 1996, and on arrests and detentions in the county in 1998 and 1999, found Sergeant John White had been involved in 'wrongdoing', but also that some allegations made against gardaí were unfounded.

A spokesperson for the Department of Justice said the report had to be released within 14 days of it being received by the Minister for Justice and today is the deadline for meeting that requirement.

The requirement arises under the Tribunals of Inquiry Act and is provided for in the Morris Tribunal's Terms of Reference. 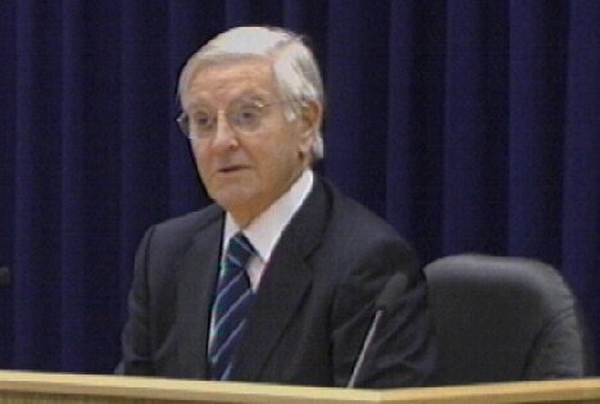 McBrearty walks out of Morris Tribunal