Russian riot police have clashed with protestors in Moscow as they gathered for an unauthorised rally against the election of President Vladimir Putin's protege, Dmitry Medvedev.

Some of the protesters lit flares spreading smoke across the square in central Moscow, screaming 'fascists! fascists!'

The leaders of Russia's small and splintered liberal opposition have called a series of rallies to protest against the election of Mr Medvedev, who official figures show won just over 70% of the vote.

Opposition leader Garry Kasparov, the former world chess champion who attended a separate rally in the northern city of St Petersburg, said 250 people had been detained in Moscow.

Mr Medvedev has vowed to uphold the policies of his mentor, Vladimir Putin, following the election result.

He coasted to an easy win in a presidential election criticised by Western observers as not fully democratic.

Highlighting the double act that will run Russia, Mr Medvedev stood beside Mr Putin on stage at a victory rock concert in Red Square last night in his first public appearance after official results were released.

With 99.45% of the votes counted, Medvedev had 70.23%, the Central Election Commission said. Because of a higher turnout, more Russians chose him than picked Mr Putin in the 2004 presidential election - 52m votes to 49.6m.

Countrywide turnout at the polls was 69.65%.

The highest turnout was registered in the war-torn republic of Chechnya, with about 91%.

Domestic observers criticised the poll for a stream of violations, saying people were pressured to vote, absentee voting was abused and monitors were refused access to polling stations.

A monitoring group said the election's outcome broadly reflected the will of the people but fell short on a number of issues.

Mr Medvedev won by a huge margin without taking part in a single campaign debate.

The 42-year-old will be the youngest Russian leader since Tsar Nicholas II when he is sworn in on 7 May. He has asked former KGB spy Mr Putin to be his prime minister. Mr Putin, 55, was prevented by term limits from running for re-election.

'I think [my presidency] will be a direct continuation,' said Mr Medvedev, referring to Mr Putin's eight years in office - a period marked by a concentration of power in the Kremlin and a willingness to stand up to the West on foreign policy.

In a further sign Russia is not softening its assertive foreign policy, state-controlled gas giant Gazprom cut supplies to Ukraine by a quarter of Ukraine's needs over a debt row - a worry to Western Europe which depends on Russian gas deliveries.

Mr Putin and Mr Medvedev say they will abide by the constitution, which gives the president control of foreign policy and 'power ministries' such as defence and the security services, while the prime minister looks after the economy and social services.

But it is still not clear which of them will really be in charge of the vast, nuclear-armed country, and analysts question if their power-sharing arrangement can last long in a nation accustomed to having a single, strong leader.

Many Russians are enjoying the benefits of the biggest economic boom in a generation - fuelled largely by oil exports - and they see Mr Medvedev as the natural heir to Mr Putin and the best chance of hanging on to their new found prosperity.

Mr Medvedev, a former law professor who has spent most of his working life in Mr Putin's shadow, said he would not let his powerful prime minister encroach on his authority. 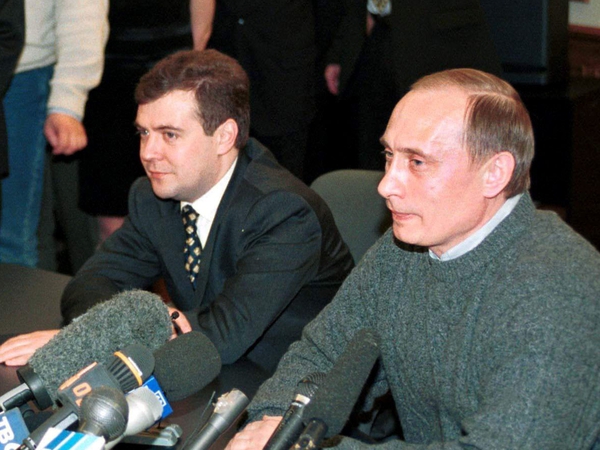