Waves more than 13 metres in height have been recorded off the west coast.

The measurements are in line with forecasts issued by the Marine Institute and Met Éireann earlier this week.

The Institute says it is likely that wave heights inshore will be reduced, but could still be in the eight to nine metre range, which poses danger for those walking or fishing near the shoreline.

Fishing vessels, surfers, anglers and walkers had been warned to be extremely vigilant on the west coast this weekend.

Authorities warned of record swells along the Atlantic coastline, which were predicted to be higher than 14m.

The forecasts were compiled by the Marine Institute and Met Eireann using offshore buoys and computer-generated wave predictions.

The Marine Institute warned that the entire west coast, from Cork to Donegal, would be affected by the large Atlantic swell.

Previously, the biggest waves were recorded to the west of Galway Bay in January 2005, when swells of 13.4m were recorded.

The Coast Guard has also advised people not to go out on exposed coasts, cliffs, piers, harbour walls, beaches, promenades or other coastal areas.

The institute said similar conditions, though not as severe, were expected for the middle of next week.

Meanwhile, parts of Kerry, Clare, Galway and Mayo were without electricity today due to the bad weather.

10,000 homes in Connemara were without power from midday until 3.30pm today. 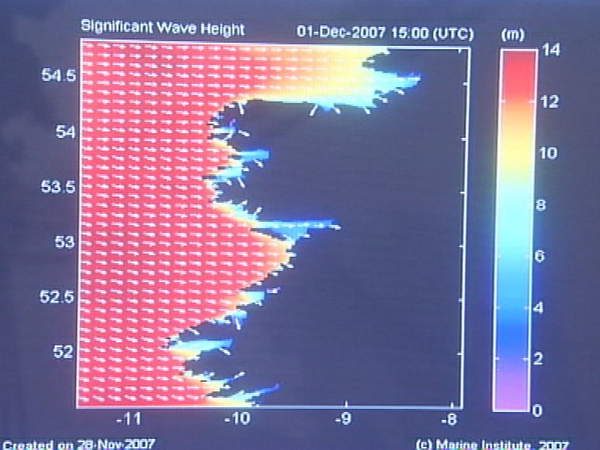