Wildlife rangers from the National Parks and Wildlife Service have arrived in Kerry with 15 white-tailed eagle chicks as part of a programme to re-introduce extinct birds of prey to Ireland.

The eagle chicks will be raised in captivity in Killarney National Park for the next month, before being released back into the wild in Kerry.

It is almost a century since white-tailed eagles have hunted in the Irish countryside.

A programme to re-introduce them in Ireland saw wildlife rangers travel to Flatanger north of Trondheim in Norway to collect 15 chicks from the growing population of wild white-tailed eagles there.

And shortly before noon today, the first-class cargo arrived on its own charter flight to Kerry Airport.

The eagle chicks looked none the worse for the two-hour flight, but appeared slightly bemused by the fuss and media attention.

Each of the chicks is around six weeks old. They will be raised in captivity in Killarney National Park for another month until they can fly, when they will be released as part of a programme to transfer 100 white-tailed eagles to Ireland over the next five years.

The programme has been meticulously planned and the project team is confident it will work.

Around 50 farmers were also at the airport today to express their concerns that the eagles might attack lambs.

In 1910 the white-tailed eagle was driven into extinction in Ireland by hunting. At that stage the eagles were regarded as pests.

Their re-introduction now, almost 100 years after they disappeared from our countryside, will be an opportunity to measure in a very practical way how much we have learned about co-existing with nature and our environment. 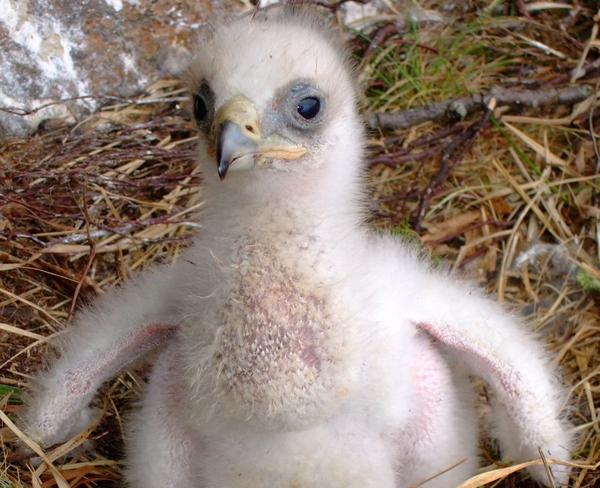