At least 26 people have been killed in a suicide bomb blast in the Sadr City district of the Iraqi capital Baghdad.

Six Iraqi soldiers were among those killed when an explosive laden car exploded at a military checkpoint at the entrance to the Shia enclave.

However the US military has so far only confirmed the deaths of six people in the blast, contradicting figures provided by both the Imam Ali hospital and the Ibn Nafees Hospital in the city.

Checkpoints were in place as part of the ongoing security operation in the Iraqi capital that aims to quell ongoing sectarian violence.

Fire quickly spread from the scene of the blast on a bridge leading from Palestine Street in central Baghdad to Mudaffer Square on the edge of Sadr City.

It is understood the bomber was trying to enter Sadr City through the army checkpoint when his vehicle was halted by soldiers. The bomber then detonated his explosives.

The blast was several miles away from the city centre where security was stepped up as regional and international officials gathered for a conference.

In his opening speech at the gathering, Iraqi Prime Minister Nuri al-Maliki called on all those with a stake in Middle East peace to stand firm against terrorism in Iraq.

He said his country needed the support of its neighbours and the world to stem the Shia-Sunni sectarian violence, which he said could spill over to other countries in the region.

Even the most conservative estimates put the death toll from the Iraq war at tens of thousands and the conflict has seen some two million people forced to flee abroad since the US-led invasion four years ago.

Despite appealing for help in quelling violence, Mr Maliki Maliki also demanded that other countries refrain from interfering in the domestic affairs of the Iraqi state.

He warned regional rivals to stop using Iraq as a battlefield to fight out their proxy wars.

The Shia prime minister emphasised that 'national reconciliation' between Shia and Sunni factions was the only way to prevent the conflict spreading beyond Iraq borders.

US officials at today's conference met with representatives from both Syria and Iran, two countries that the US has previously accused of supporting the insurgency in Iraq.

Besides finding ways to stop the bloodshed in Iraq, the one-day meeting was a rare opportunity for the US, Iran and Syria to sit at the same table.

Washington, which has no diplomatic relations with Iran, has had contacts with Iranian officials in group settings, including as recently as September, but has so far resisted bilateral talks. 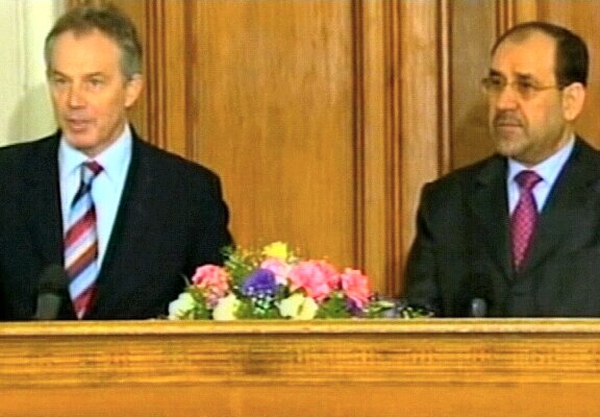