A Co Mayo businessman told a protest rally this morning that an employee of Shell Ireland had offered him €15,000, with no strings attached, in 2005 for a sports centre he was developing.

Ciarán Ó Murchú, who runs an Irish language school and adventure centre at Elly Bay, said it sounded alarm bells for him because as a large employer he would be effectively intimidating his employees to support Shell if he accepted the money.

He said he would have felt like a traitor to the local community - although an offer of €15,000 was very tempting.

In a statement, Shell Ireland said that at no point was a payment or grant of €15,000 offered to Mr Ó Murchú and it would be against its business principles to do so.

It said it had given €150 to a windsurfing event which he organised this year.

About 130 members of the Shell to Sea Campaign took part in this morning's protest march.

The organisers say they intend to continue their daily protest at the terminal and they hope that these will be peaceful.

There was a fresh demand today for a halt to the construction of the controversial Corrib gas terminal in Co Mayo.

Four TDs, who took part in a protest march at the site this morning, called on Shell to suspend the €200 million project and re-open talks with local people.

Socialist Party TD Joe Higgins and Independent TDs Jerry Cowley, Tony Gregory and Seamus Healy are to protest to the Garda Commissioner over the filming by a garda cameraman of a public meeting which they held this morning.

Addressing the protest meeting at the terminal site, Mr Higgins said Shell should be forced to build an off-shore terminal.

He also criticised the large garda presence at the site each morning and said it was beyond belief that the Government would treat the people of the area in the way they had.

Deputy Gregory said the TDs were offering their solidarity with the people of the area.

A force of about 30 gardaí was on duty. 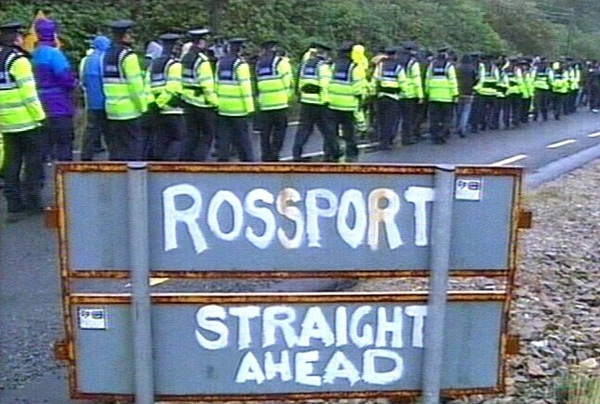