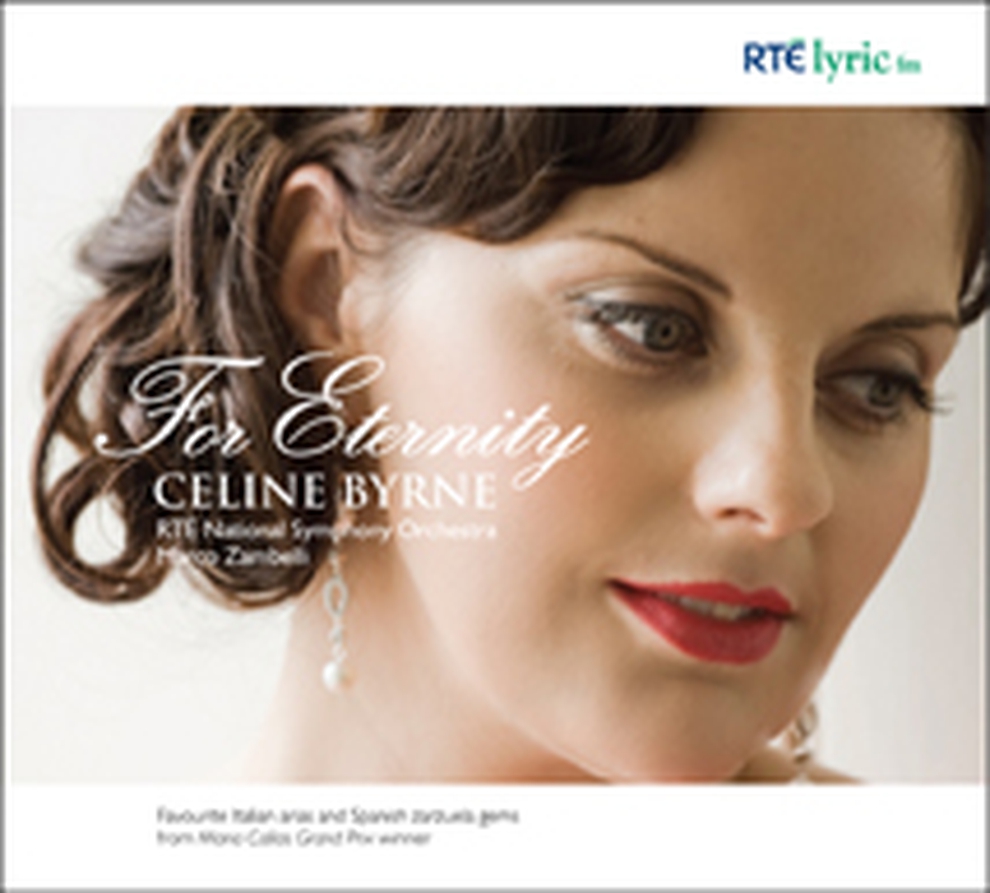 Celine Byrne may have been a late-comer to the world of opera, she was eighteen years old and working as an au-pair in Italy when she first heard opera sung live, which persuaded her to take singing lessons. Scroll forward to today and among Celine’s achievements are her Carnegie Hall debut, a broadcast to over 200 million people in China, and winning the Maria Callas Grand Prix in 2007. Truly, her star is in the ascendant.

Now, Celine Byrne releases her debut CD For Eternity on the RTÉ lyric fm label. While she has a refreshing affinity with the opera classics like Ebben n’andrò lontana from La Wally, and Puccini’s Vissi d’arte and Sì, mi chiamano Mimì, she also displays her remarkable voice on several songs from the Spanish zarzuela tradition to which she was introduced by José Carreras.

Accompanied by the RTÉ National Symphony Orchestra and Studio Choir conducted by Marco Zambelli, CELINE BYRNE: FOR ETERNITY heralds a remarkable new voice to all lovers of great singing. Even the critics love her!

“If Carreras’s singing was a confirmation, the performance of Naas-born soprano Celine Byrne proved a revelation. She will have won many new admirers with her silky delivery of arias such as Delibes’ Les Filles de Cadiz and the obligatory O mio babbino caro from Gianni Schicchi.”
The Sunday Business Post

“She has presence, a powerful and flexible voice, and the intelligence to understand how music and words work together”.
The Irish Times

CELINE BYRNE, SOPRANO
Celine Byrne from Naas, Co. Kildare, is currently studying with Christa Ludwig at the Vienna Staatsoper. Celine has a Masters in Music from the Royal Irish Academy of Music, Dublin, where she studied with Dr. Veronica Dunne. She also has an honours Music Degree from the Conservatory of Music and Drama, Dublin, where she was awarded the college Gold Medal for excellence. There she studied with Edith Forrest and coach Trudi Carberry. Celine also received part-time coaching at the National Opera Studio of London and has participated in master classes given by Malcolm Martineau, Dennis O'Neill, Wolfgang Holzmair, Tina Ruta and Roberta Alexandra. She was a participant in the artistic development programme with Wexford Opera.

Celine has received many awards both on a national and international platform. She was presented with the Margaret Burke-Sheridan award, Dublin 2009, First Prize at the Maria Callas Grand Prix, Athens 2007, the William Young Prize at the Veronica Dunne International Singing Competition, Dublin 2007 and the Brabants Dagblad Press Prize at the IVC International Singing Competition in s'Hertogenbosch, The Netherlands. Celine is also a winner of 10 prizes at the Feis Ceoil, Dublin, the Bill Canning Bursary, Waterford 2003, and the John McCormack Bursary, Dublin 2003.

Celine made her Carnegie Hall debut in 2007 and since then has performed all over the world in many prestigious venues, most recently at the National Centre of Performing Arts, Beijing, in a concert broadcast to over 200,000,000 people. Celine has become familiar to international audiences thanks to her collaboration with world-renowned tenors, Jose Carreras and Roberto Alagna. Together with Carreras, Celine has graced stages throughout Europe and her musical partnership with Roberto Alagna has seen her in concert in Russia's two major artistic centres: Tchaikovsky Hall, Moscow and the Milhailovsky (Mussorgsky) Theatre, St Petersburg. Celine has made many many television and radio appearance on RTE, the BBC, Croatia's HRT, Beijing TV and Holland's Radio 4 amongst others.

Celine's repertoire includes Oratorio, Opera, Operetta and Lieder. Most recently Celine performed the role of Mimi in the Scottish Opera production of LA BOHEME for which she was described as "a soprano of fine lyrical quality and a touching actor too" - Opera magazine