Several months ago, the idea of a city break might have seemed like a bad idea. Crowds and concrete weren’t top of anyone’s agenda. But as we gradually tip toe back to some degree of normality, the cultural void left by months of lockdown is becoming more pronounced. Theatres, galleries, shops and restaurants have been noticeably absent from our lives.

While it might take some time before we’re ready to embrace a metropolis again, smaller cities have greater appeal. Easily navigable on foot and populated by more trees than people, Finland’s capital Helsinki strikes a perfect balance between space and social activity. Mornings can be spent admiring Art Nouveau architecture, while sunny autumn afternoons are ideal for a sauna and bracing sea swim.

Any vaccinated travellers can enter without a PCR test, and most restrictions on venues have been lifted. Not that overcrowding is ever an issue in a city where there’s always enough space to freely roam.

The only stressful decision is deciding what to do…

Take a sauna at Löyly 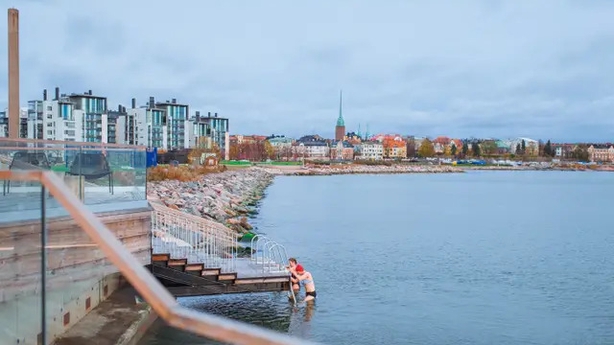 As much a piece of art as a place to relax, this angular building has become a trendy hangout for locals who prefer a modern take on the Finnish tradition of sauna. Named after the metal ladle used to throw water on coals and increase steam, the site is set on the waterfront in a former industrial area a little out of town.

Bathing suits are worn in the communal saunas which can reach up to 90C if overzealous Finns are in the room. Cool off by going outside and taking a dip in the sea, accessed via a ladder. An outdoor restaurant provides a relaxing space to chill and chatter between sweat sessions. In the winter, drink beer around an indoor fire. A two-hour session costs €19, including a towel and seat cover. Visit loylyhelsinki.fi/en/.

Walk around the Amos Rex

Originally built for the 1936 Olympics, which only happened several years later, this Art Nouveau masterpiece has been lovingly restored and given a new lease of life. Climb a spiral staircase to find a cinema with striking red leather seats and head downstairs to an art gallery built in the basement. Perfect for showcasing largescale installations, the cavernous area hosts several shows throughout the year.

Light streams through windows built into cones rising from the marketplace square outside. Cherished by locals, the futuristic structures have been a particular hit with skateboarders. The gallery even has a stash of spare skateboards behind the counter should any tourists like to have a go. Pop into the neighbouring Lasipalatsi cafe to admire the frescoes and more 1930s design. Visit amosrex.fi/en/.

The latest venture from adventurous, trend-setting chef Richard McCormick only opened a few weeks ago, but it’s already causing a stir. Overlooking Esplanade Park in the centre of Helsinki, the unabashedly pink parlour is a playful mix of plush dining booths and tacky Eighties antiques.

Once the Instagram frenzy is over, however, it’s worth sticking around for the food. Using local Finnish ingredients to transform French and European favourites, the menu is a delight. A tartare of foraged mushrooms is rich in earthy, forest flavours; a lobster linguine is a sweet and salty nod to the sea.

If you’re lucky, Richard’s mum, Nisa, might be on waitress duty. A flamboyant character with a background in singing musicals, she’ll happily share stories of her colourful life. Visit cherihelsinki.com.

So much of Helsinki’s architecture deserves attention. One of the most iconic structures is the train station, built in the early 20th century. An example of Art Nouveau splendour, its pistachio-hued clocktower rises above two pairs of lantern-bearing statues flanking the entrance.

Designed by the same architect, Eliel Saarinen, the neighbouring railway administration building has been transformed into a hotel. Inside, long corridors are laid out in a grid system, with wide staircases connecting each floor. Highlight features include original murals signposting different departments and a wooden boardroom table scarred by the imprint of a speaker’s hammer.

The breakfast buffet is one of the city’s finest offerings. Find three types of porridge, a seasonal apple crumble with custard, and egg soufflé served with a chimichurri sauce. From €102 per night, including breakfast. Visit scandichotels.com.

Shop with a conscience

Old is gold – just ask the shoppers who are rifling through racks of vintage gems at Relove in #Helsinki, #Finland while other customers sip coffee at nearby tables indoors or on the sidewalk. ?????? https://t.co/dIKdll5i02

Living so close to nature, Finns have an inbuilt desire to live as sustainably as possible. Mindful of the waste generated by over-consumption, citizens are changing their habits and finding new ways to eat and shop.

Alongside popular charity stores featuring furnishings and bric a brac, several designer clothes shops aim to give used items a new home. A cut above any jumble sale, clothing hangs neatly from rails and accessories are displayed in glass cabinets at Flea (Iso Roobertinkatu 11), which also doubles as a champagne bar. It’s a similar set up at Relove (Fredrikinkatu 25), where a section is set aside for a trendy café serving elaborate cakes and pastries.

Go one step further and start from scratch with an excellent collection of yarns sold at multiple knitting shops in the city. Part of the school curriculum, the popular pastime is taught to boys and girls.