Solo travel may once have conjured up the image of someone simply having no one to go adventuring with, but more and more of us are choosing to strap on a backpack and explore the world alone. And it’s not necessarily a reflection of relationship status, or whether or not we have like-minded friends who could come along.

I’d been plotting my three-month escape around South America – hiking in the Andes, wildlife spotting in the Amazon rainforest, and learning a new language – for a while, but the moment I told friends and family I’d be doing six weeks of it solo, it’s fair to say the reaction wasn’t entirely positive.

I’m a decade deep into my career and much older than the average gap year traveller, but I couldn’t help but feel like a thirty-something man wouldn’t receive the same surprised, sometimes concerned, reception: Isn’t it unsafe? Wouldn’t I be lonely? Shouldn’t I be saving for a house? Or simply, why?

As to the why, it’s time we started viewing travel as a valuable experience, an opportunity for personal growth, and an important way to open our eyes to the complexities and diversity of the world – particularly what’s not immediately around us. I wanted to get out of my comfort zone, challenge myself and, quite frankly, have an amazing time after focusing on my career while lots of my friends went travelling their twenties.

Full-time female travel influencers, like a The Blonde Abroad, Adventurous Kate and Young Adventuress, with their hundreds of thousands of followers, have probably helped inspire more of the Instagram generation to go ahead and book trips without waiting for a partner, child or friend to be free.

And according to research by Culture Trip, solo female travel is more popular than ever – while only 14% had travelled alone in the past five years, now 34% of women want to take the plunge. It might be more rewarding than you think…

Your only responsibility is to take care of yourself – and that’s really freeing
It was the first time I’d ever travelled alone when I landed in Peru in October 2018. My intention was to make my way around the south of the country, across the Bolivian border – with La Paz and the Uyuni salt flats among the many stops – and eventually into northern Chile. My boyfriend Matthew would join me there, and in Argentina, for the last two months, but here I was flying the solo flag, with very little actually planned for the next six weeks.

I wanted to mostly make it up as I went along, do whatever I felt like that day/week, whether it was hiking a canyon (Colca near Arequipa), taking a cooking class (Peruvian ceviche) or reading in a hammock all day – a pretty liberating experience you only get by travelling alone, without anyone else’s influence over your itinerary.

You achieve stuff every day
It might sound insignificant, but sometimes even just figuring out how to get from A to B – especially if it’s in a foreign language you’ve only just started learning – feels like a challenge overcome.

Sure, some achievements – like the five-day Salkantay hike to Machu Picchu, night trekking with all manner of creepy crawlies in the Amazon, and cycling the ‘World’s Most Dangerous Road’ – were actual challenges (at least for me), but ignoring my ingrained British aloofness to approach and befriend strangers felt like an accomplishment some days too.

Alone time is strangely cathartic
But also quite intense. With no one else to lean on, you have to trust your own judgement and decisions (something I didn’t always find easy, and didn’t even realise I didn’t find easy until I travelled alone).

Most days I felt empowered and independent, but if anyone says solo travel is fun and carefree 100% of the time, they’re either lying or a much more evolved human than I am. ‘Up and down’ is how you hear lots of solo travellers (men and women) describe it, and yes, at times, when I arrived in a new place not knowing anyone, it was strange, sometimes lonely, and anxiety-inducing, but it was always worthwhile.

It forces you to be uber-sociable
You also often hear it said that you’re never really alone when you travel alone, and it’s true. If you stay in hostels, travel by bus and join a few group tours, you’ll meet other people with similar plans and mindsets. I had so many more amazing off-the-cuff days, nights or even weeks with new friends from all over the world, and made more connections than I would have done had I been travelling with someone else.

Society makes us believe being alone means lonely, but when there’s a worldwide community of travellers (single, loved-up, some who’d quit their job, others who’d taken a sabbatical; I even met a mum who’d left her six-year-old with his dad at home so she could finally have a bit of me-time), as well as people from the local communities you’re travelling through, that’s simply not true.

There are so many myths around the dangers for women
One of the biggest barriers to women travelling alone is the perception of the safety of the countries we go to. Yes, some places have worse track records for violence against women and petty theft than others, but it’s important not to put a blanket ban on entire countries and continents because of these sometimes dated or exaggerated, perceptions.

The trick is to arm yourself with all the facts (which can help ease worried family members’ minds when you announce you’re off to a far-flung corner of a country they know nothing about). Assess the risks beforehand and read up on common scams.

I packed a money belt to hide emergency cash and credit cards, wore no jewellery whatsoever, tried not to walk on my own late at night and was on high-alert for anyone throwing something over, or in front of, me (a trick I’d heard about to distract tourists from their belongings). But in all honesty, I didn’t come across anyone in Peru or Bolivia who was anything less than welcoming, helpful and respectful.

… and you might be surprised what you take home with you
Really listening to – and acting on – your own wants and needs isn’t something we all do every day, or sometimes very much at all – particularly women who are often lumbered with more responsibility when it comes to children, family members or running a home.

So, whether you want to book a plane ticket alone and pack a rucksack, or not, as International Women’s Day on March 8 approaches, we could probably all benefit from making a bit more time in our lives for the things that really make us happy. 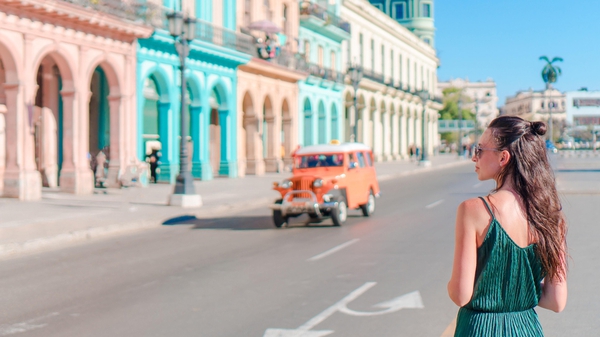