So often, America is credited with throwing the best Halloween parties, but this city is hoping to steal that ghostly crown.

Regularly voted as one the best spooky festivals around the world, Derry’s ghoulish celebrations are growing in fame and notoriety. From Celtic rituals to fancy-dress parties, here’s how it all started…. 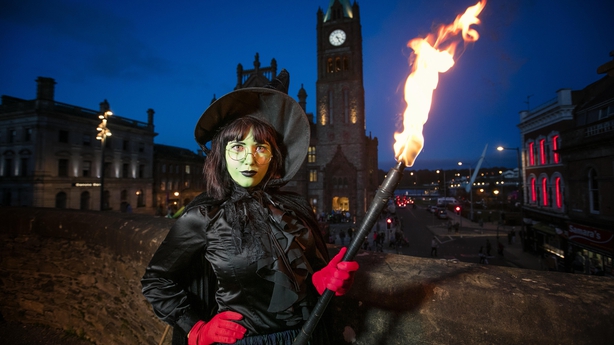 Pagan beginnings
More than 2,000 years ago, Celts celebrated the festival of Samhain on October 31, when the dead returned to earth before the start of a new year. Druids would extinguish old fires and re-light new ones, and ghost stories were frequently told. When thousands of Irish people emigrated to America in the late 19th century following the potato famine, Halloween grew in popularity on the other side of the Atlantic.

Derry’s own spooktacular story
In 1985, at the height of The Troubles, pub landlord Brian Doherty decided to throw a Halloween party at his pub, Doherty’s Bar, on Derry’s Magazine Street. "People were looking for an opportunity to enjoy themselves," he recalls. "We got some posters done and had prizes for the best costumes.

"Nearly all the regulars and their friends, 50-60 people, arrived in fancy dress – a lot more than we were expecting and there was a really fantastic party atmosphere." Outfits included cavemen, Batman, witches, nuns and babies in large nappies.

"Then in the middle of it all, there was a bomb scare and we had to evacuate the premises as quickly as possible, so everybody piled out of the bar onto the street."

Eager to continue the party, Brian and his crew headed down to nearby Shipquay Street, an area of the city centre still well known for its bars and nightclubs.

"Nobody in the other bars was in fancy dress apart from ourselves, but when we arrived, everybody joined in the Halloween spirit and we had a great night’s craic.

"The following year, nearly all the bars in the city centre put on their own entertainment. I can’t say for certain we started the tradition but that memorable night in 1985, when everybody spilled out onto Shipquay Street, is now regarded as Derry’s first Halloween parade."

An official event
Doherty believes the evening typified the Walled City’s so-called LegenDerry spirit, which helped them survive that dark period in Irish history. The following year, the Council got involved with the organisation of a Halloween carnival parade along streets on the banks of the Foyle. But the first fireworks display didn’t take place until the early Nineties, as fireworks were banned at the height of The Troubles. The annual event now attracts thousands of visitors from all over the world.

"Our profile as the best Halloween destination in the world is not undeserved," says Jacqueline Whoriskey, Festivals and Events manager with Derry City and Strabane District Council. "While the event has achieved international status, it’s the community spirit that sets it apart and the fact that the people of the city are involved in every aspect of the celebration, and our talent, ambition, creativity and imagination shine through every element of the programme. It’s what Derry is all about."

What’s happening this year
Derry’s Halloween festival will run from October 26 – November 1, with more than 100 arts, music, food and cultural events in more than 40 venues across the city.