Rome, Tuscany and Venice are usually the areas that are marked out as the highlights of a trip to Italy. But hiding down in the heel of Italy lies Puglia, one of the countries underrated gems.

While other destinations in the country have tended to steal the limelight, over the last number of years Puglia has finally made a push for inclusion as one of the must-see areas in this most beautiful of countries, and I for one agree that the region should rank very highly on lists of Europe’s most desirable places to visit. Why? It’s got everything that Italy does well wrapped-up in a great little package: food, wine, culture and superb scenery. The kicker? It’s a damn sight cheaper than the more illustrious Italian destinations.

Producing 80% of Europe’s pasta and renowned for its wide variety of food, especially fresh and delicious veg, the region is foodie heaven and everywhere you travel different dishes, specific to towns, are there to be devoured.

We started and ended a five-day trip by flying in and out of Bari airport, which has direct Ryanair flights to Dublin, and boasts a location on the Adriatic coast of the region, making it a superb entry and exit point for a self-drive loop.

A late night Monday landing, followed by a taxi journey brought us to our first destination – Ostuni: the famed white city, an hour’s drive south of the airport. And as one approaches through the darkness the city is unmissable; like a Lord of the Rings-style fortress it’s the only urban conurbation in sight and glows with yellow light, like a beacon welcoming you in.

Having wound our way up the hills by taxi we were dropped at our home for the night: the Ostuni Palace. Like the name suggests, it’s Italian grandeur, white walls, clean design and has a superb restaurant serving the most delicious deep-fried courgette flowers stuffed with ricotta, one of those specialities I mentioned earlier. 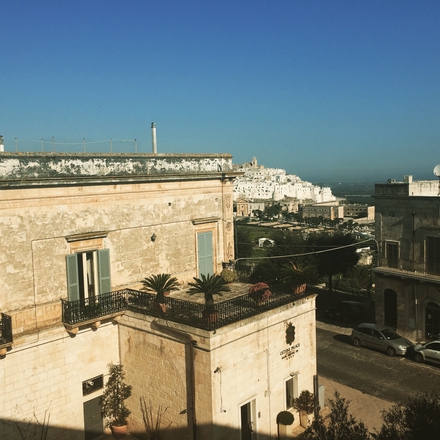 The view from the Ostuni Palace Hotel

The following day there was a chance to explore the town, and it’s one designed for ambling, with labyrinthine streets winding their way up from the newer section to the fortress, bishop’s palace and cathedral of the white city itself. First inhabited in the Paleolithic period, it has passed through the hands of the Romans, Ostrogoths, Longobards and Normans, making it an intriguing mix of various architectural styles and eras.

The old citadel’s shimmering white walls and quiet streets are peace personified and when you've had your fill you can relax in one of many piazzas and eat your fill, followed by some of the best espresso money can buy. I doff my hat to Chiazza Cuverta that serves the most famous Puglian dish: ears of pasta (orecchiette) with turnip greens; the dish is as simple as hell, but like Puglia, its simplicity is its elegance.

Back on the road with the Puglian sun beating down, a feature of my entire week there, which is a rarity rather than a given when travelling in Italy over Easter, my next destination was Alberobello. Perhaps the most famous town of the region it’s famous for trulli - the conical homes that dot the linear settlements that approach the town, and then line the main street of the town proper. Being named as a UNESCO World Heritage site ensures that the 14th century buildings have shot near the top of many world traveller’s wish lists. And much like Chichen Itza or other world-famous sites you need to get there early or late to get them on your own and enjoy their full majesty. We didn't and got to enjoy them with bus-loads of tourists; however, one of the local souvenir shops let us sneak upstairs to their balcony where we could watch the sun set over the cones and admire their architectural beauty from above. 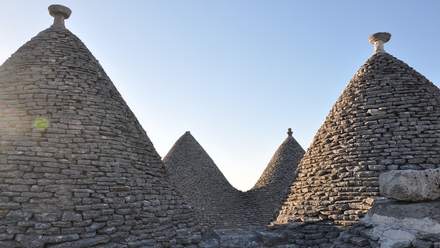 The rooftops of the conical trulli houses in Alberobello

And with the sun bowed it was back on the road south to Taranto on the Ionian coast; it’s known as an industrial town and therefore one that most tourists don’t visit, which makes it superbly off-the-beaten track and a place to get to the heart of real Italy.

We based ourselves just outside the city at the five-star Relais Histo and if you want a hotel with wow factor this is it. Perched on a hilltop looking back over the city it resembles a Central American villa, sun-bleached white walls and landscaped Puglian gardens encase a simply stunning hotel, with a restaurant that serves outstanding local seafood. The building is a restored farmhouse, which took 14 years to transform into its current incarnation, and also features a spa, as well as both indoor and outdoor swimming pools. It’s up there with some of the best hotels I’ve ever stayed in: world class. 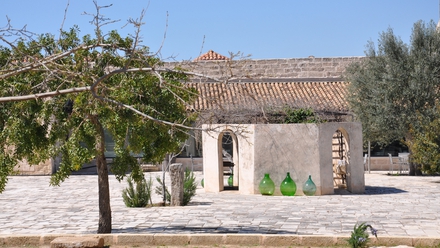 The five-star Relais Histo hotel, located on the outskirts of Taranto

The best day trip from Relais Histo is north across into the neighboring region of Basilicata and the town of Matera.

Film buffs in particular will be agog to see the town where Mel Gibson filmed The Passion of the Christ. There are guided tours of the town available to see the filming locations and the rest of the Paleolithic town, which was literally carved into the rock of the hillsides to make cave dwellings, from which the town expanded out from the ancient centre known as the Sassi: unique and beautiful. 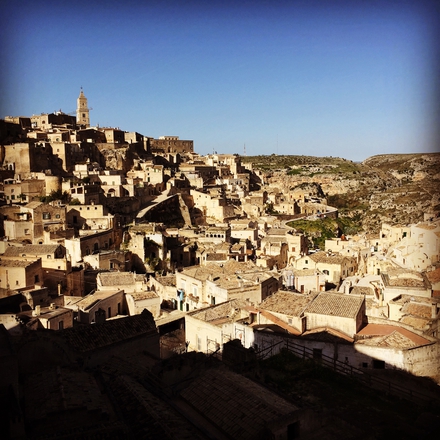 Matera: the shooting location for Mel Gibson’s The Passion of the Christ

Taranto proper is also so worth exploring with its fascinating mix of naval military and post-industrial architecture. Sections of the city are perfectly maintained, while others are beguiling and show the side of Italy affected by the economic downturn of this century.

What’s more, during the time of the Roman Empire, Taranto was the main city of the south and as a result is an archaeological goldmine. The Museo Nazionale Archeologico houses a jaw-dropping array of artefacts ranging from war material to fully restored mosaics to perfectly preserved jewellery. It's a knock-out museum and helps to mentally place the city historically and culturally.

A major part of that Puglian culture is its food, and a local tradition is to feast on a never-ending supply of starters, while you wait for your mains to arrive. The place to do this in Taranto is La Pignata: a local, out-of-the-way restaurant that will not disappoint. Plate after plate of options flew out to our tables: parma ham, burrata (Puglia’s answer to mozzarella), roast veg, meat ravioli, courgette flowers, calamari, and more, all washed down with primitivo wine: my favourite of the region. By the time the starters had ended we were too full for mains, so instead the main course became tiramisu and a bottle of limoncello; the owner clearly not too concerned with measures, and more with hospitality. 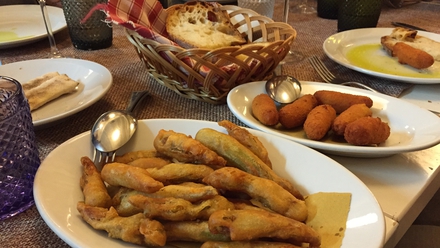 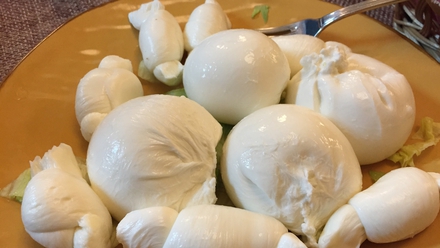 My final stop was Lecce via Porto Cesareo, located south of Taranto. A lovely, peaceful coast town, with a sweeping sandy beach, this is the place to unwind and soak up some rays and take a dip in the Ionian Sea, which has better beaches than Italy’s rockier Adriatic coast. The town also boasts a stunning seafood restaurant in Hotel Falli. Like La Pignata they excel at serving an array of starters, but fish and seafood is their thing, with a location looking out over the sea. I’d recommend eating dinner there before making the short drive over to the Adriatic side and Lecce, with its beautiful Baroque town centre, filled with local university students that fuel the town with an energy and vitality that make it a superb place for some bar hopping in the early hours before laying your head. The place to sleep in town is Patria Lecce or Santa Chiara, both slap bang in the middle of town, and a stone’s throw from all the nightlife. 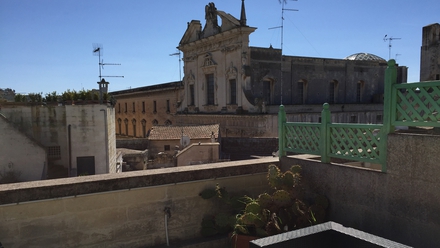 The view from Patria Lecce Hotel 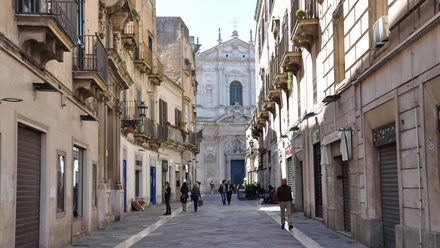 The Baroque streets of Lecce 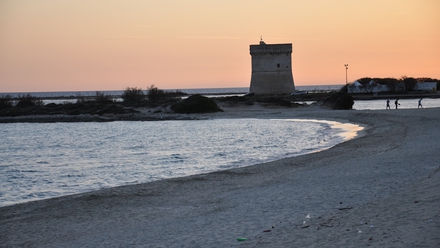 From Lecce, Bari airport and a return flight home to Ireland awaited. Along the journey up the Adriatic coast highway I did have time for one final stop at Tenute Rubino winery where sommelier Angelo guided me through the differences between the local grape varieties: primitivo, negroamaro and malvasia; a tranquil way to round off the trip before returning to more northern climes.

As I lay back in my seat, flying over central Europe, I pondered as to why Puglia had left such a mark on me. Over many trips to Italy I have fallen in love with the boot of Europe, but Puglia gave me a truer sense of Italy then I have had on previous trips, a deeper insight into the psyche of one of Europe’s great cultures. It’s real Italy: beautiful, imperfect and bursting with warmth and hospitality.

Getting there: Ryanair fly direct from Dublin to Bari.

While there: Puglia.ie are a Dublin-based tour operator that specialise in the region. They can organise an itinerary for you including accommodation, transfers and dining options. Run by Puglian native Daniele Napoleoni they have superb insight and knowledge of the entire region.