In the first of a two-part series, we examine the growth of electric vehicle use in Europe and around the world.

The research folk at Thomson Reuters say that in order to understand the full implications of the EV movement, it helps to look closely at what’s driving it. Unlike other massive shifts in consumer preference – such as the growth of smartphones, the rise of ecommerce, or even the first automotive revolution – which were all driven almost entirely by technological innovation, technology is just one part of a three-pronged phenomenon that’s behind the EV revolution. The other two critical variables are growing environmental awareness and fast-moving political policy changes.

Let’s start with the environment. While estimates vary, the motor sector is believed to contribute somewhere between 15 and 25 percent of polluting emissions, such as nitrogen oxide, particulate matter, and carbon dioxide, according to Johann Wiebe, Thomson Reuters Lead Metals Analyst.

Collectively, these pollutants, which are now concentrated at their highest levels in the Earth’s atmosphere in the last 650,000 years, are linked to climate change. Studies suggest that the Earth’s temperature will rise far more than two degrees Celsius by the end of this century unless significant changes are made to global manufacturing, energy supply, and consumer practices. At the same time, these pollutants created smog and local pollution, creating health problems and choking major cities.

It was no accident then, just as large-scale public outcry in response to this trend was starting to build, that auto manufacturers began marketing alternative-powered vehicles that produced lower emissions by augmenting internal combustion engines with electric motors. Toyota was the first to really capture this market with its hybrid Prius, which launched in Japan in 1997.

By 2003, the Prius had gone from novelty to status symbol, thanks in part to a stroke of deft marketing from a California Toyota dealer. He lent the cars to A-list celebrities and well-known environmental activists like Leonardo DiCaprio and Cameron Diaz, who took them to the 2003 Academy Awards in lieu of gas-guzzling limos. Suddenly, the Prius was more than a car and hybrid was more than a technology; they were statements about the environmental consciousness of the people who drove them. 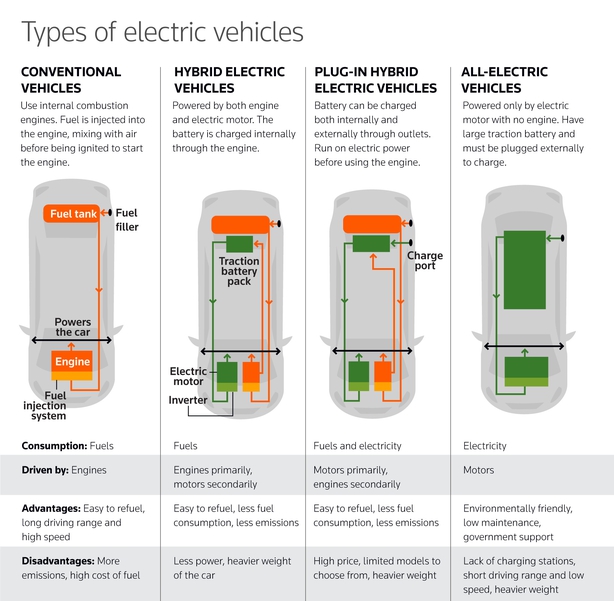 As momentum continued to grow in support of greater environmental consciousness, governments around the world began to get the message that even Leonardo DiCaprio did not have enough star power to change consumer automotive buying habits all by himself. Though the Prius was growing in popularity, its annual sales figures were just a fraction of sales of traditionally powered light trucks and SUVs. In 2012, the best sales year ever for the Prius, Toyota sold 247,500 units in the U.S. Meanwhile, over the same period, Ford sold over 650,000 F-150 full-size pickup trucks in the U.S.

That was also the year the U.S. passed the new Corporate Average Fuel Economy (CAFE) standards, which were put in place by the Environmental Protection Agency (EPA) under President Barack Obama, and called for auto manufacturers to have an average fuel economy of 54.5 miles per gallon (mpg) across their fleets by the 2025 model year. As a point of reference, the average fuel economy for all cars sold in 2012 was 23.2 mpg (10 L/100km).

The Electric Vehicle revolution is being driven by institutions of all varieties. According to Thomson Reuters Westlaw, Hawaii (an early adopter of EV regulation), requires that for every 100 parking spaces, one must be equipped with an EV charging system. In Hartford, Connecticut, it’s one for every 35.

The U.S. was not alone. The European Union, which implemented an agreement with auto manufacturers to reduce carbon dioxide emissions as early as 1998, has been gradually increasing its fuel efficiency targets ever since.

More recently, a number of countries have signaled even more rigorous emissions standards by proposing deadlines for the outright outlaw of sales of vehicles with internal combustion engines. Norway has outlined the most aggressive targets, banning the sales of traditionally powered vehicles by 2025. Others, such as India, the Netherlands, and Israel, have proposed a 2030 target, while China (the world’s largest car market) is actively considering and studying a ban. 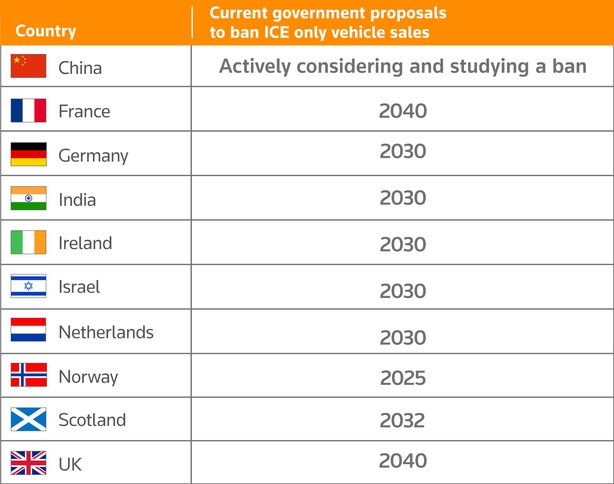 It’s not just restrictions. A host of national and local incentives have also been implemented in the U.S. and around the world to encourage more widespread consumer adoption of EVs.

Norway — the top country in the world for EV market share — makes for a compelling case study. EV and plug-in hybrids reached a 39% market share in 2017, in large part driven by a number of government incentives, including: 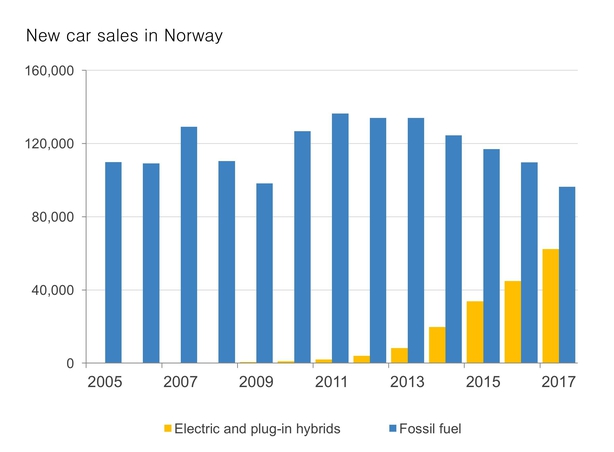 Technology rises to the occasion

As consumer awareness continued to grow and governments around the world set rigorous new fuel economy standards, automotive technology also upped its game. While the Prius had become a Hollywood darling by delivering 56 mpg, but very little else in the way of performance or luxury, the electric Tesla Model S, introduced in 2012, set an entirely new standard of what was possible in an alternative-powered vehicle. Able to hurtle from 0-to-60 mph in 2.5 seconds, the four-door luxury sedan became the quickest production vehicle in the world.

Suddenly environmentalists and enthusiasts alike could find something to get excited about in the burgeoning EV movement. Still, despite the rapid-fire growth coming from several different directions, just six countries  – China, the U.S., Japan, Canada, Norway, and the UK – currently have EV market shares that are above one percent of total vehicle sales. That number is expected to grow exponentially over the next several years, though.

The key to that growth has been technological improvement in lithium-ion batteries. As Thomson Reuters senior energy analyst Jon Berntsen explains, technology improvements in this space are causing energy storage prices to drop precipitously.

"Due to economies of scale, the price for the lithium-ion battery pack is dropping steadily by 15 percent every year and the energy density is increasing," Berntsen explains. "This results in a longer range for the same price. When the range increases more, consumers will accept EVs and the adoption moves along a classic technology adoption curve: from early adopters to laggards. This market is no different from other tech markets."

"With this development, EVs will sooner or later reach the price/quality ratios that make them competitive with fossil-fuel alternatives," Berntsen adds. "When that happens, the market will tip into a new direction quickly."