Edinburgh Festival Fringe is back in full force after last year’s event faced restrictions, and performers and audiences alike will be chomping at the bit to get back into cosy venues, open-air performances, and all of the weird and wonderfulness it has to offer.

With stand-up, improvisation, sketches, theatre, musicals and more, there are plenty of thought-provoking and hysterical shows on – all day, every day – across the capital of Scotland. But, the Edinburgh Fringe is perhaps best known for the incredible comedy it hosts, as comedians flock to the city in droves.

Watching comedy and having a good laugh doesn’t just feel fun though. It can really benefit your brain and body too.

"Laughter is one of the best forms of medicine for banishing the blues and brightening the mood, it’s something we should all be doing more of every day," says Dr Dimitrios Paschos, consultant psychiatrist at Re:Cognition Health.

It can also be hugely beneficial in helping to ease social anxiety and distract from pressure or negative feelings, Paschos notes.

"When we experience anxiety, we have increased levels of the stress hormones adrenaline and cortisol, which are counteracted by the endorphins released when we laugh," he adds.

Edinburgh Fringe is weird and wonderful to say the least – and our bodies respond to the weird in funny ways, says Paschos.

"Our brains find ‘inconsequential anomalies’ funny. When something out of order is picked by the brain, attention, alongside other mental resources, is rapidly shifted to the novelty to decide if it is a threat. We take a deep breath or stop breathing. As soon as we realise it is not a threat, we ‘laugh it off’, thus fast releasing mental and bodily tension.

And what about the body?

Researchers have measured physiological responses to laughter too. "Laughter immediately increases the intake of air, stimulates blood circulation and makes the brain release endorphins, the body’s natural painkillers, and creates a sense of calmness," says Paschos.

It’s may even be beneficial for the immune system. For example, studies have suggested that laughing can help "to increase the production of antibodies, which help protect us from infection," he adds.

My Edinburgh Fringe run starts this Thursday August 4th! Would LOVE you to join me for a very civilised midday start. Tickets ➡️ LINK IN BIO pic.twitter.com/m2WkUKwSb7

Watching comedy can be an act of mindfulness

Anaesthetist, author and comedian, Ed Patrick, says the immersive nature of comedy is key. "The audience is engaged with the jokes and absorbed in the moment, which helps them to escape their worries and leave their daily stresses behind.

"Often comedy taps into shared experiences – jokes are stimulating and funny because they’re relatable," he says. "So it’s a break from reality for the audience, but it’s also inspired by the struggles and funny moments of reality we all experience – and that brings everyone together." 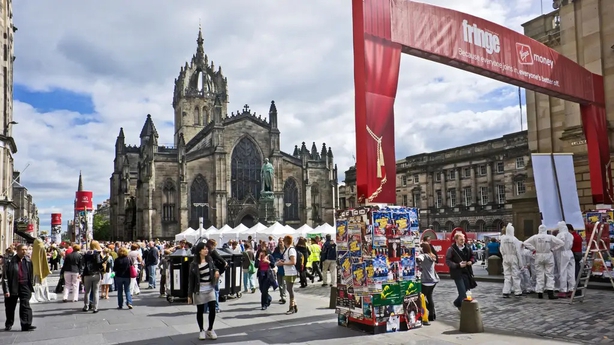 Creating it can be cathartic too

The process can work both ways too – as well as bringing a boost for audiences, comedy can have healing effects for the comedians creating it.

From his personal experience, Patrick has used comedy and writing as a way of coping with the stress of life on the pandemic’s frontline over the past two years. You could say the process of creating comedy can be therpeutic.

"It’s a terrifying thing to stand on stage in front of an audience and be vulnerable – but it’s also incredibly powerful," says Patrick. "In writing a stand-up joke, comics are often taking their personal experiences and regarding them at arm’s length – it gives you a new perspective and sense of control over your own experiences, because suddenly you’re thinking about their narrative arc.

"Being able to ruminate on something, process it and laugh about it can have a truly cathartic effect," Patrick continues. "It creates a sort of distance between you and the story you’re sharing, that enables you to claim a sort of power over it. This can be incredibly powerful in helping people to deal with past trauma."