In Queer History Lessons, comedian Shane Daniel Byrne is teaching us all about LGBTQ+ history, from flags to voguing and everything in between. In today's episode, we're learning about LGBTQ+ rights in Ireland.

In the space of a generation, Ireland has come a long way in going from a country that was overwhelmingly conservative toward LGBTQ+ issues to becoming far more liberal in laws and attitudes, thanks to heroes of the community who have fought long and hard for this. Although the work is far from finished, here are some of the main milestones in LGBTQ+ rights throughout the years.

1861 – Offences Against the Persons Act
Laws in Ireland history again homosexuality dated back to the Victorian era and started that "buggery", male to male sexual acts, were punishable by the death penalty. In 1861 the Offences Against the Person Act was updated and streamlined which abolished the death penalty for such acts but it restated its illegality and the punishment was instead life imprisonment.

1970s – Social movement begins
A number of Irish gay civil rights movements are established including the Irish Gay Rights Movement chaired by David Norris. In 1975 David Norris appeared on 'Last House' in what is believed to be the first interview with an openly gay person on RTÉ Television. His first sentence was to state that homosexuals were not sick people...but were subject to head colds and influenza as other are.

At the time Ireland was the only sovereign EEC country to still retain criminal sanctions in law against homosexuality and two years after this interview Norris began legal proceedings to overthrow this law.

1983 – Ireland's First Pride Parade
On the 19th of March 1983, LGBQT+ people marched in protest from Liberty Hall to Fairview. It was a response to the ruling of the tragic death of Declan Fylnn who was beaten to death for being gay which highlighted and accelerated the Pride movement in Ireland.

Later that year in June was week-long schedule of celebrations and protest. Although the first Gay Pride Week events had been held years before in 1979, the first Pride parade was held this year and it has gone from strength to strength since.

1988 – Norris vs Ireland
A 14 year legal battle by Senator David Norris against the Irish state came to an end in October 1988, when The European Court of Human Rights rules that Irish laws penalising male homosexual behaviour had breached the European Convention on Human Rights. This verdict paved the way for future changes to decriminalise in Ireland. 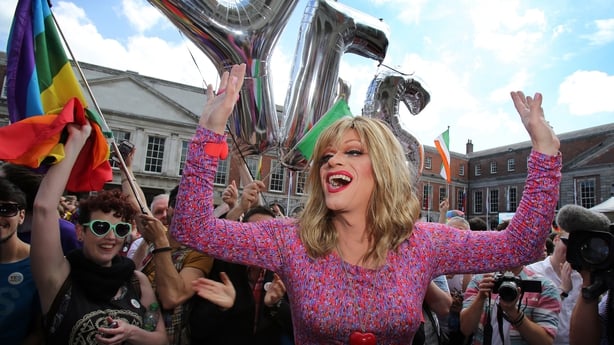 1997 – Dr.Lydia Foy
In April 1997 Dr. Lydia Foy begins legal proceedings in the High Court after being rejected a new birth certificate and legal recognition of her female gender in 1993 and several years of fruitless correspondence. At this time Ireland had no provision for legal recognition of transgender people in their true gender.

2010 – Civil Partnership Act
A civil partnership bill passes through cabinet that grants same-sex couples some of the same rights as married couples. And although the bill was cautiously welcomed it still left a lot of inequality particularly when it came to children and adoption.

May 2015 – Marriage Equality referendum
Following a historical referendum which amended the Constitution of Ireland, Ireland became the first country in the world to bring in same-sex marriage by a popular vote. The result was described as a social revolution and expression of decency.

Funnily enough, in the efforts to legalise same-sex marriage the government came close to potentially making heterosexual marriage unconstitutional due to the translation of the Irish language version of the law. When translated back to English it originally read that "A couple may, whether they are men or women, make a contract of marriage in accordance with law.". There were concerns that this could be interpreted as meaning that only men and only women could marry one another and the wording was changed before the referendum took place.

2021 – Same Sex couple recognised as co-parents from birth
After the final sections of the Children and Family Relationships Act 2015 were enacted in 2020, Niamh O’Sullivan and Geraldine Rea became the first same-sex couple in Ireland to have both their names registered on the official birth certificates of their twin baby girls.

Today – What's still to be achieved?
So we’ve seen where we’ve come from but where have we left to go?
Many children of LGBT+ parents in Ireland are still denied the right to have a legally recognised relationship with both of their parents including children born to male parents and children born via surrogacy. And there are calls on the Government to amend the Children and Family Relationships Act.

Groups like TENI, are still advocating for the inclusion of young, intersex and non-binary people in the Gender Recognition Act as well as better access to healthcare for all trans people.

While in March 2018 a bill was introduced to ban conversion therapy on LGBT people it’s still sitting in the early committee stages in the Seanad, so the practice is currently still legal.