There’s something strangely soothing about a tourist attraction that predates humanity, and is likely to outlive it as well. Some of the world’s most arresting landscapes were hewn out of solid rock by the elements over many, many millennia, and it’s a mere quirk of coincidence that we now find them so compelling.

‘Fluid’ is a strange adjective to describe rocks – perhaps the most inanimate of the world’s inanimate objects – but for the Vermilion Cliffs National Monument it’s the only word that suits. Straddling the Utah-Arizona border, the area is famed for cyclic layers of reddish rock, undulating over the smooth surfaces like waves of shimmering light. The site’s sandstones is so delicate that visitor permits are limited, and selected by online lottery.

Set on a high plateau in Central Anatolia, these pointy, perpendicular formations were once columns of volcanic ash, solidified into rocky rods over the course of millions of years. Today they reach up to 130 feet, adorning the lunar landscape like the turrets of a sandcastle. See if you can guess what else they’re often compared to. Yep, got it in one.

All that remains of a once mighty mountain range eroded by 200 million years of rain, these precarious pillars are located just below the Arctic Circle on the far side of the Ural Mountains, and climb between 30 and 42 metres into the sky. Sacred to the local Mansi people, who believed they were giants petrified by the Gods, the rocks were named one of the Seven Wonders of Russia in 2008, alongside Lake Baikal, the Peterhof Palace, and St Basil’s Cathedral. 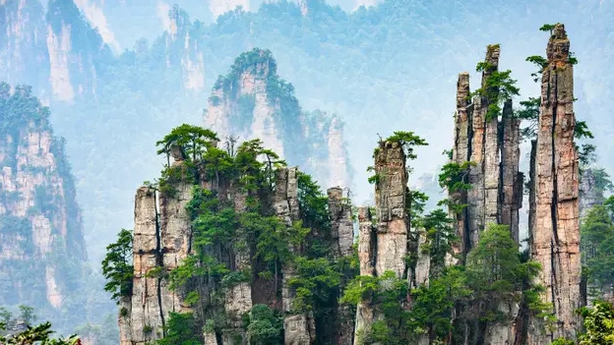 Perhaps best known for inspiring the giant floating islands in James Cameron’s Avatar, the jagged sandstone pillars of Wulingyuan must rank among the most vertiginous scenery in the world. More than 3,000 of them dot the otherwise lush landscape – many sheer-sided and hundreds of metres tall – and when mist descends they appear suspended in a sea of cloud. 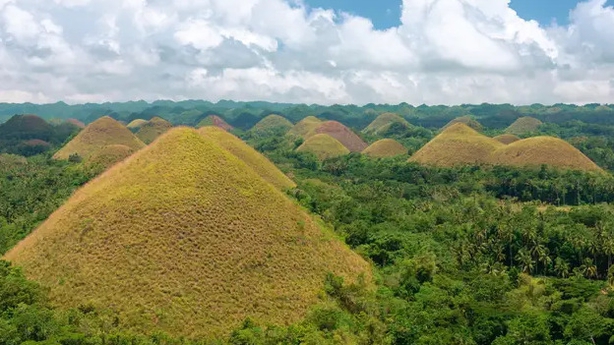 A world renowned attraction on the central Filipino island of Bohol, the contrasting beauty of the Chocolate Hills is hard to appreciate on just one trip. Normally coated in verdant grasses, the 1200-plus conical mounds turn a rich brown during the dry season, when the greenery withers away into dirt. Their exact origin remains unclear, but local legends posit everything from the tears of a giant to the faeces of an enormous buffalo.

6. Eye of the Sahara, Mauritania

Perhaps more accessible to astronauts than to your average holidaymaker, the Eye of the Sahara (also known as the Richat Structure) is the geological equivalent of an absolutely massive crop circle. Measuring 28 miles in diameter, this extraordinary phenomenon is apparently an ‘eroded, uplifted geologic dome’ (nope, we’re not sure what that is either). There would definitely be theories about UFO landing sites if it was better known.

Declared a UNESCO World Heritage Site in 1986, it’s hard to believe the Giant’s Causeway was not wrought by human hands. A coastal concourse made up of 40,000 smooth-sided, hexagonal basalt columns, the causeway looks too choreographed for Mother Nature, but was the work of an eruption back when Antrim was a hotbed of volcanic activity. We prefer the popular legend that it was built by mythic Gaelic giant Finn MacCool.

In Malagasy ‘tsingy’ translates loosely as ‘walking on tiptoes’ – a natural fit for one of the world’s spikiest landscapes. A massive ‘forest’ of limestone needles and razor-sharp ramparts, Tsingy de Bemaraha was carved by millennia of unusual erosion, and now looks more like Mordor than the neighbouring rainforests. Madagascar is renowned for endemic species (90% of its fauna are found nowhere else), and even this inhospitable ecosystem houses unique species of lizard, lemur and frog. Not one to visit in flip flops.

Claiming the highest concentration of ‘hoodoos’ (irregularly shaped columns of rock) anywhere on Earth, the Bryce Canyon National Park is so loaded with pillars and protrusions it looks like the back of a giant stone porcupine. The rows of dusty red spires are divided by plunging valleys and patches of evergreen forest, hugging the rim of a plateau that turns white every winter.

It is very, very, very easy to see where Wave Rock gets its name. Halfway between a rock face and the kind of tsunami only seen in disaster movies, the concave surface has been slowly weathered into shape across 2700 million years, and colourised by vertical stripes of algae. Despite its aquatic appearance, Wave Rock is hundreds of kilometres inland, in the heart of Western Australia’s southwest corner.