With half the competition wiped out, the quarter final of Ireland's Fittest Family is sure to be intense as the remaining eight families gear up to take on a whole new set of challenges.

We started with 16 fearless families who have trudged, sprinted, climbed and jumped their way through treacherous courses and mental challenges. Now, just half that remains and it's getting serious.

With one quarter final behind us, it's time to find out the next round of lucky families that will charge on towards the semi final in the SWAMP.

"The condition of the man, he looks like Ned Flanders"

The competition began with these families making their way through the FOREST challenge course, but now they move into the LAKE, an even more gruelling course. Last week's episode was a white-knuckled, panting chase through the challenges, as the families were pushed to their limits.

It was Anna Geary's Doyles from Antrim who were eliminated from the competition after a ferocious effort, while Derval's Cullens from Wexford and Mileys fro Kildare move to the semi finals with Davy's Mahoneys from Wexford.

Tonight, Derval brings her last two families, the Kulczynskis from Clare and the O'Rourkes from Galway to the LAKE and Anna cheers on the Brackens from Meath. After missing out last week, Donncha finally gets his go at the LAKE with his only family left in the competition, the Allens from Tipperary.

These fearless families will first tackle the Pontoons of Pain, a double nominated head-to-head relay race between all four families.

Starting with a slide into water and a swim to the pontoons, the families will reckon with a moving pathway, a balance beam, pontoon jumps and a forest run. Once the first family member completes the track, the second is released, making for some truly nail-biting minutes.

Next comes the dreaded and iconic Ireland's Fittest Family event, Hanging Tough, where the families really show what they're made of. A fan favourite in the series, last week's challenge was tense and nail-bitingly close, and we're sure tonight's one will be just the same. 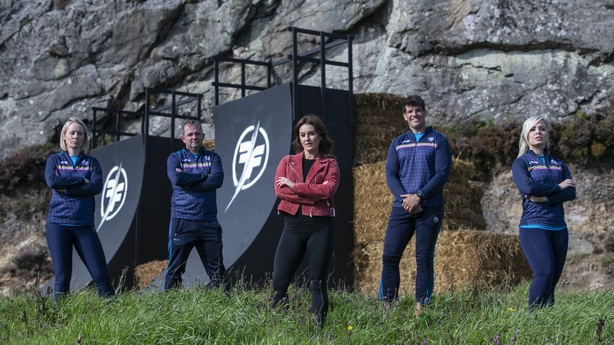 A test of will power and endurance, the clock starts when the families' feet leave the ground. Each family member must hang over 6 meters, or 20ft, above the freezing water for as long as they possibly can. But remember, this isn't about the last person up there. Times of the four family members will be combined, so every second counts.

Finally, the four families must take on the Eliminator, a fast and action-packed obstacle course that always leaves us on the edge of our seats.

Starting with a series of obstacles and low walls set close together, the families must tackle rat tunnels suspended off the ground, a freezing cold ice bath, a cargo net crawl – the biggest the show has ever had – and a 10 foot climbing wall.

And it wouldn't be the Eliminator without those enormous ramps and families clambering to get up them. The family at the top first wins the race and the loser is eliminated.

Watch Ireland's Fittest Family this Sunday at 6:30pm on RTÉ One