As The Late Late Show returns for Ryan Tubridy's 11th season, the host chats to Darragh McManus about getting out of Dublin, his plans for the Late Late, his writing and how he loves being the father of an adult and teenager.

Ryan Tubridy is getting out and about, getting reconnected to the real Ireland – and loving it. When we spoke to the broadcaster, he’d just done an episode of his Radio 1 show from Schull, Co Cork, before travelling on to Ardmore in Waterford: "Kind of the last kick of our trip along the Wild Atlantic Way."

There have been several such expeditions in 2019. Ryan’s never been averse to taking the show on the road, but really wanted to "ramp it up" this year. "It’s very useful as a listening and watching exercise," he says, "to see what’s happening in the country. You can get stuck in the bunker a bit, being in Dublin, so we’ve tried to get out as much as we can.

There’s a lot of darkness in the world, but you have to get the overall balance right: lots of good things in the world too. Without being all candy floss about it, we try to get that mix right between light and shade.

"All in all, Ireland is a pretty good place to live, and I don’t think there’s anything wrong with saying you’re proud to be Irish or to be patriotic or anything like that. I would definitely accentuate the positive. This country can be great, but not everyone points that out. It’s when you go out and about that you realise, there’s a happier story there than you might think."

He’d do the radio on location around Ireland every day if he could. This won’t come as a major surprise, but he’s a gregarious fellow, who loves meeting the public and hearing their stories. Stories: telling them, listening to them, sharing them. It’s an intrinsic part of whatever it means to be Irish – and so, of course, is The Late Late Show. As Ryan explains, the two are inextricably linked: "Irish people are brilliant at telling stories, which is also something the Late Late does well. That’s what people want: Irish stories, told well."

This year marks his 11th season in the most famous hot-seat in Irish broadcasting – which means, since Pat Kenny did 10, that Ryan is about to become the second-longest-running host of Europe's longest-running
chat-show.

"Yeah, once I get the first few shows out there!" he laughs. "Don’t want to jinx it. When I started, I didn’t know how it would go; it was quite an unusual feeling to be doing that job, you know? I tend to just go from season to season, and each one brings something different. The fact that this is our 11th year, it almost feels like a reboot – a new phase."

This season, they’re hoping to channel a lot of where the country is at right now. The opener features "a selection of people representing Ireland: Sinead O’Connor, an icon; Aisling Bea, a new superstar knocking them out in the UK; and Maura Higgins from Love Island, a pop-culture phenomenon. It’s running the gamut, and that’s where The Late Late excels. We’re also hoping to make a nod towards all the people who’ve served this country in uniform, which needs to be done. Just to say thanks. And where else can you do that, but on The Late Late?"

He's got a pretty heavy schedule for much of the year: radio every day, Late Late every week. Not to mention his own books: as well as two non-fiction for adults, there have been two children’s books – The First Christmas Jumper comes out in paperback this autumn – with another "in the pipeline", and plans for more adult books "sometime in the post-Late Late world".

"It's fairly full-on, alright," Ryan concedes. "And nowadays once you leave the house, you're on. That's the nature of modern life, with mobile phones. Which is good; if you're not being stopped for selfies or people shaking your hand, you're probably doing something wrong. And I like meeting people; the job isn't just about being on radio and TV.

"It can be hard to decompress at the weekend, I suppose. The Late Late is one of the few remaining live chat-shows in the world, and that increases the pressure on me and the team. We love that challenge, but it's exhausting at times. Then again, teachers do this every day – talking to people, holding their attention – I’m only doing it once a week. And the job is fun. I love it, I’ve no gripes."

How does he relax, then? He likes "simple pleasures": walking the pier near his home in Dun Laoghaire ("People will see me there all the time; good for the brain and the soul"), reading many, many books ("I love reading; it’s no work at all for me, I could do it all day") or going to the cinema, sometimes with his mother, Catherine.

"We sit down and I say to my mum, 'No…talking!’ She gives me a look as if to say, ‘Well, damn you to hell…’ Ah no, we’ll discuss it afterwards. It’s a lovely thing to be able to do together. We went to Blinded by the Light and both really enjoyed it."

Family, naturally, is very important to Ryan. His girls, Ella and Julia, are now 20 and 14 – he jokes about how, as a parent, "You might worry just as much, but at least your playdate days are behind you! No, it’s fantastic, to watch them evolve into these beautiful young adults.

"And I don’t feel older, having an adult child; weirdly, it kind of makes you feel younger, in that they keep you in touch with what’s going on. I watched Love Island vicariously through them, and they’ll clip my wings when I make a terrible Dad joke. Or I’ll hear a song and they’ll tell me who it’s by. They’re thriving, they’re tremendous." 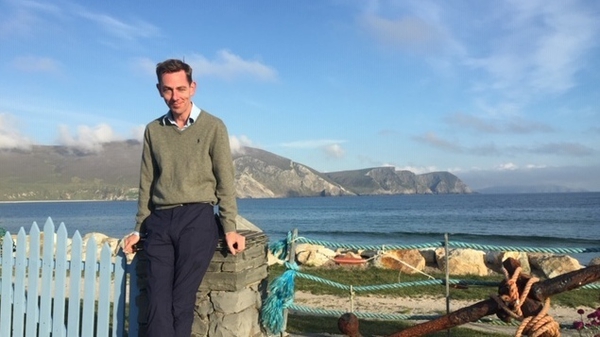