We’re becoming increasingly aware of humanity’s responsibility to stop suffocating the planet with plastic. And between Blue Planet II, supermarket's 'bag for life', and the proposed (if problematic) plastic straw ban, it feels like some kind of headway is finally being made.

But then, you look in the kitchen bin and see packets and packets of transparent film all headed straight for landfill.

As someone who already thought they were hyper-aware of their plastic consumption (I am the girl with the canvas bag and the reusable water bottle), I decided to see what a month’s worth of my single-use and non-recyclable plastics would actually look like.

I collected a month’s worth of the single-use plastic + non-recyclable plastics I get through for a feature, to see what it’d amount to - made me feel so sick. So much waste. pic.twitter.com/q1TVcMcshq

Surely, it wouldn’t be too bad? After all, I’m already on the low end of the plastic consumption spectrum. I make tin foil wrapped packed lunches, use beeswax food covers and the roll of clingfilm sat in my kitchen drawer has been there a VERY long time and won’t be renewed. And I don’t even drink coffee, so don’t question me on my coffee cup usage.

But a week in I was feeling despondent, and by the end of the month, absolutely livid. This is what I gleaned along the way…

Some things you just can’t find plastic-free alternatives for
Lettuce, peas, and corn (frozen things are particularly difficult, although fish fingers and waffles do come in cardboard boxes), packets of pasta, body wash, toilet roll, and toothpaste, for instance. We’re often told to buy in bulk when it comes to items that, by necessity come in plastic, but you can’t buy giant tubes of toothpaste that’ll last a year, can you?!

There are hidden bits of plastic everywhere
I did actually find a pasta brand that opted for paper bags, but even so, they’d ruined things by inserting a plastic panel so you could see the rigatoni shapes inside, utterly defeating the point.

It’s insidious, the plastic panel. From envelopes to the bags you buy baguettes in – I don’t want a window on to my baked goods, I want surprise, blind hope, and biodegradable packaging, dammit.

Did you know that with the exception of the small amount that has been incinerated, virtually every piece of plastic ever made still exists in some shape or form? >> Become part of the solution and refuse single-use plastic https://t.co/Kl4UaJaAGz pic.twitter.com/FUgqdz8Xb5

You find yourself ensnared when thinking you’ve been virtuous, too. You’re happily shredding an egg box into the compost only to discover the label wasn’t printed but stuck on. You eschew the multipack of apples for loose ones, and then find a sticker on each (more plastic!).

Even when you try to do the right thing, you’re foiled – and it’s even worse when you think something actually is foil (recyclable) and turns out to be foil fringed with plastic (looking at you Lindt chocolate wrappers). It’s like you’re constantly being set up to fail – and don’t get me started on yoghurt; the pot’s recyclable but the lid’s not?! Come. On.

Our world is not currently set up to make better choices easy
Arguably, I could go to a farm where they produce their yoghurt and milk direct from the animals and store it only in glass. Or I could magic back into existence milkmen in my area (if I could, I really, really would – milk floats were largely electric too). I could, in theory, order all my meat from the butcher, and supply them with my own Tupperware for transporting the bacon; and in a world where I had the skills and the space, I could grow all my own fruit and veg to be collected in wicker baskets and wrapped in cloth.

Instead, we have plastic-reliant supermarkets everywhere, just desperate to fill our cupboards swiftly and cheaply, while shopping locally via butchers, grocers and farm shops is difficult when you work full-time, and are often – understandably – more expensive. The model is all wrong.

When people say ‘make your own’ – it’s not always realistic
It becomes normal to start tracking back in my head how I could possibly have made the plastic-encased item I’ve picked up, from scratch, myself, and plastic-free.

In practically every scenario, it might be possible, but the lengths you have to go to aren’t all that life/time-friendly. Take orange juice: It tends to come in a bottle (plastic) or in a carton (plastic lined).

To make it yourself you’d need quite a few oranges which you’ll have to buy individually (bought in bulk, they come in those plastic string net bags), avoiding any with stickers on (stickers = plastic) to be squeezed at home manually. Or you can go to a café with one of those fresh orange squeezing machines and order the stuff in a glass, but this will cost you (and who knows what their oranges were delivered in to begin with?).

The only way you can be totally 100% sure, is to find an orange tree and pick ‘em with your bare hands.

According to a new study, balloons are the deadliest form of plastic debris for seabirds. #BreakFreeFromPlastic pic.twitter.com/YJ3wt9p0U1

Shopping begins to make you feel incredibly stressed
It’s relentless, and shocking and maddening to watch the plastic you use build up until it’s bursting at the seams of a (plastic!) bin liner.

Then my mind turns to all the plastic we’re constantly surrounded by, even if it’s not single-use – phones, pens, chargers, the clasp on your bike helmet, your Groot-shaped keyring, your lip balm container, the polyester in your jumper, the chair you’re sat on, the handle of the knife you’re chopping with… it’s endless.

Next, you start looking back on your life, wondering how intact every Polly Pocket or CD you ever played is, the plastic hair clips you wore to primary school, the polythene bag your fish from the fairground came in when you were five and they were still allowed to hand them out as prizes…

Every toothbrush you’ve ever used is out their somewhere, every chocolate bar wrapper, along with every piece of plastic that has connected a clothing label to every dress, t-shirt, and pair of jeans you’ve ever worn. It’s terrifying.

And once you start to mentally calculate the amount of plastic you’ve been in cahoots with, you feel like you’re being walled in by the stuff, choked, like the birds and sea creatures being washed up, their internal organs tangled in it.

You start making deals with yourself
I find myself trying to justify not putting the latest empty Lurpak tub in my collection, because my boyfriend actually finished it off. But the guilt catches me up – I’m culpable, I put that butter on my toast too.

In the end, the only reasonable way out, in many cases, is to just stop buying things. Worn down by salad bags, sushi packets, and milk cartons, it’s clear that, the only deal we should be making is to find a way out of this synthetic hell and eliminate single-use plastics, fast. 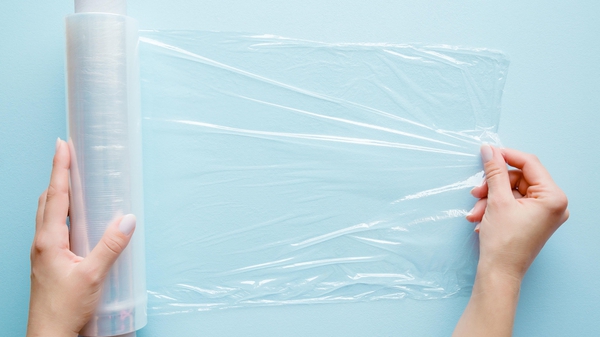