It has all the inconvenient side effects of itchy, watering eyes, noses and throats and the attractive red puffy faces for many sufferers but can trigger life-threatening reactions in others, as Sharon Cosgrove, the CEO of Asthma Ireland told RTÉ LifeStyle. Top Tips below!

"A lot of people who have asthma, they have allergic asthma and their symptoms can become worse by an allergic response and at this time of the year, we know that pollen levels can be quite high and it can cause an allergic reaction of the airwaves in the nose and down into the chest.

"So for people who have asthma it can sometimes make [it] worse. They can also be suffering from hay fever where they have a runny nose, itchy eyes, bloodshot eyes, sore throat as well as their asthma symptoms."

Any wonder that sufferers are also keen to know what the pollen count is but surprisingly and a little shockingly, we have to look to the UK for ours: "We get it from the University of Worcester, we buy it from [them] and they look at our weather patterns forecasts, I presume through the Met Office and then they calculate what the pollen levels are in our regions."

"[The Met Office] don’t do any pollen tracking here unfortunately. We would like to see over time some real time local pollen tracking in Ireland. It’s one of our long term goals to influence that." In the mean time you can check out that pollen forecast here on asthma.ie  or on the asthma App Asthma Coach. 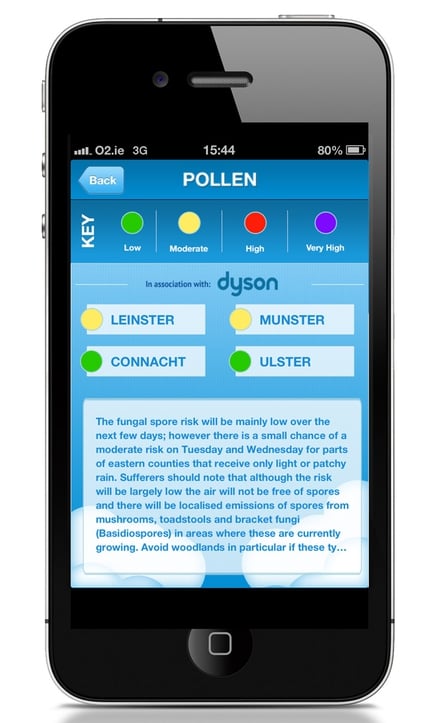 Prevention is always better than cure and with that in mind Sharon has shared her top advice below plus her key advice of starting your anti-histamine routine as soon as the pollen count begins to rise in early May each year.

1. Vaseline: It’s an oldie but a goodie, according to Sharon: "If the pollen count is high, smear Vaseline in your nose, it catches the particles as it enters your airwaves."

2. Cover Up: "If you’re cycling or running wear something across your mouth, something light that will block the pollen spores." Plus "Wrap-around sunglasses are something else that we recommend as well."

3. Ensure the Early Bird doesn’t catch the spore: Sharon pointed out: "An awful lot of people with asthma and hay fever would avoid going out and doing exercise when the pollen level is high which would be earlier in the day, maybe hold off until the evening when the pollen levels are going down a bit." I pointed out that as the pollen begins to settle again and come down for the evening, I always seem to get caught in the cross fire and hit really badly with an attack. See what works for you and you’ll soon know what times are your best/worst for getting out there.

4. Not so Great Drying Weather:  "We suggest to people if you’ve hay fever, drying clothes outside isn’t a good idea when the pollen level is high as the pollen will go on your clothes. Another thing for people who have pets, the dog might go out in the garden and they’re bringing the pollen into the house as well. Don’t be cuddling the dog too much!"

5. Local Irish honey: This doesn’t seem to be an old wives tale, as Sharon explained: "We don’t have any scientific evidence to support that at the moment and I do hope that there is research into it because it’s something that a lot of people say helps and that they do. What we hear is the more local the honey is, the more effective."