Found yourself getting more and more into cycling lately? You might be wondering how you could give yourself a bit of a boost while out on those long roads and gnarly hills.

The answer might be a lot closer than you think. In fact, it’s very possibly already in your kitchen: coffee!

As many seasoned cyclists and sports pros already know, coffee hit doesn’t just help us shake off sleepiness in the morning, it can be a very effective fitness performance-enhancer too – and the Institute for Scientific Information on Coffee has just released a video explaining some of the benefits for cyclist and the science behind them.

And you don’t have to glug gallons of the stuff to reap the rewards. A moderate intake – think a few cups max – is probably wise.

After research, the European Food Safety Authority (EFSA) concluded there’s an association between caffeine consumption and an increase in endurance performance, endurance capacity and a reduction in the rated perceived effort or exertion during exercise, compared with decaffeinated alternatives. This was based on 3mg of caffeine per kg of body weight. For a 70kg person, that equates to 210mg or two to three cups of coffee.

Clarke says: "Drinking coffee has a broad range of benefits that can improve performance from a physical perspective. These include improved muscular endurance, movement velocity and muscular strength. Performance might also increase due to the release of endorphins, which attenuates [reduces] the pain sensation and rating of perceived exertion during exercise, decreasing the perceptions of effort."

In other words, those hills won’t feel so killer!

"In addition, factors such as improved reaction time, cognition, and mood are also likely to have a positive influence on performance," adds Clarke. "Whether cycling competitively or for recreational purposes, there is evidence that drinking a cup of coffee may enhance performance." 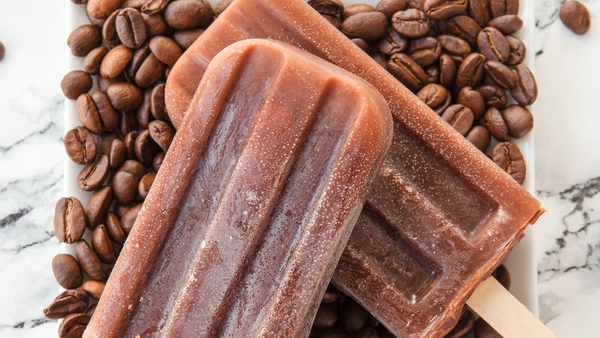 How to make instant coffee iced lollies at home