Model, influencer and former Love Island star Maura Higgins is coming to Irish screens as the host of Glow Up Ireland, the brand new Irish version of the beloved international show.

The fleeky competition will see 10 of Ireland's best amateur make-up artists (MUAs) as they attempt to contour, conceal and bake their way through a range of assignments that will show off their technical know-how and artistic skills.

Throughout the series, our MUAs will be tasked with creating jaw-dropping transformations and will take part in fabulous 'face-offs' before one of the 10 is crowned as Ireland's Next Make-Up Star, earning themselves an opportunity to further their professional career.

Ahead of the first episode airing on RTÉ2 on Thursday at 9:35pm, we are delighted to introduce you to this year's ten glamorous competitors... 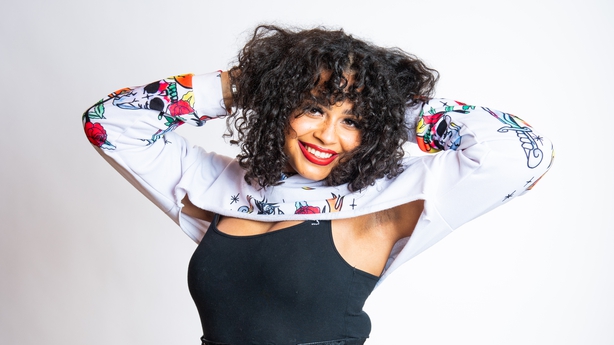 20-year-old Jade is a Cork-based makeup artist who takes inspiration from everyday objects, including "anything between a magnet on my fridge to a packet of sweets." A quick dive into her Instagram or TikTok creations showcases just that as she describes her style - a "colourful explosion to the eyes".

Only one year qualified as a makeup artist, she was about to give up on makeup because she didn’t have belief in herself to continue. She eventually started making TikToks, amassed a strong following and reignited her love for makeup during the pandemic. 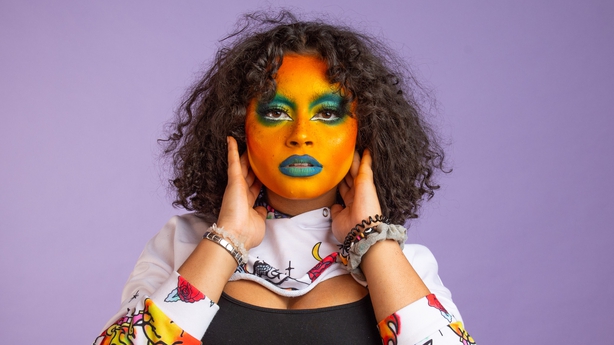 She is known on TikTok for her skills as well as her Irish humour, which she incorporates into her videos to bring an extra bit of entertainment. Jade is also involved with the Black and Irish organisation which highlights and celebrates the identity of black and mixed race Irish people.

Jade was bullied at school which resulted in her being homeschooled. Completing her Leaving Cert has been her greatest achievement in life so far. She now knows that constructive criticism isn't an attack on her and she thinks she'll cope well under pressure. She doesn’t let her anxiety hold her back from creating looks and striving for perfection. 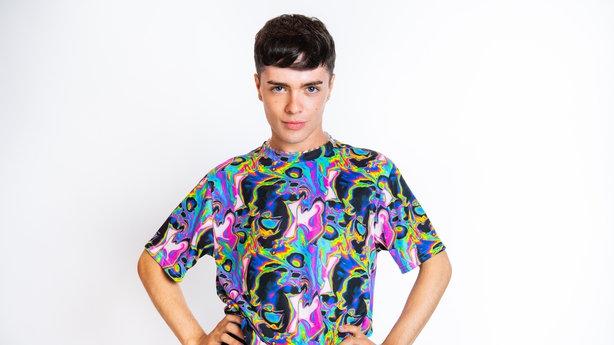 Raised in Cahersiveen, Co. Kerry, 19-year-old Niall is a student with a huge social media following. The aspiring MUA is currently studying fashion in Limerick LCAD but says that makeup is his first love.

So far, his spectacular TikTok creations have accumulated 10.7m likes, with his videos featuring a non-speaking persona.

A huge Maura Higgins fan, Niall says that people often believe him to be as confident and outgoing as the former Love Islander, but he insists he is actually really shy and is scared to put more of his personality on display. 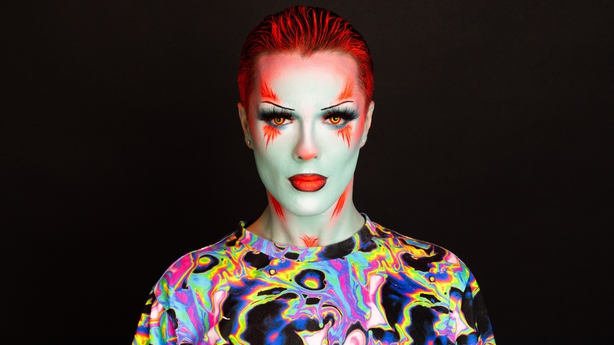 In childhood, Niall's older brother had him marked to follow in his GAA footsteps but Niall hung up his boots at the ripe old age of 12.

Instead, at age 17, he bought the James Charles palette, came downstairs with a full face of makeup and told his parents to deal with it. Thankfully, they did just that! 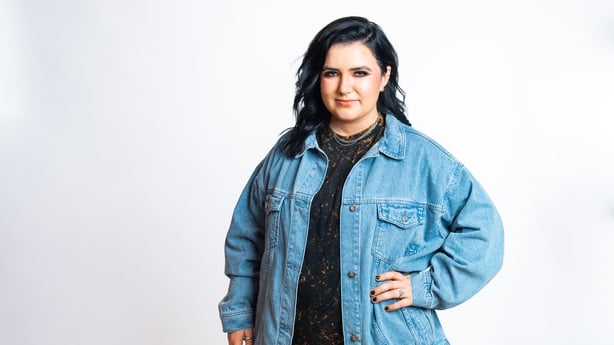 Megan is a 27-year-old, self-taught makeup artist and self-confessed Instagram lover. She has a degree in Fine Art and went from painting canvasses to painting her face.

Unfortunately, Megan's mum has advanced Alzheimers and was put into care at the beginning of the year. Megan went from being her mum’s full time carer to having time to focus on her career. In 2021, she decided to throw herself back into make-up and set herself the challenge of competing in Glow Up Ireland.

The Leitrim woman says she got her creative streak from her mum who put art on a par with academia. Her mum was always her number one fan and, if possible, she would be supporting her daughter every step of the way. 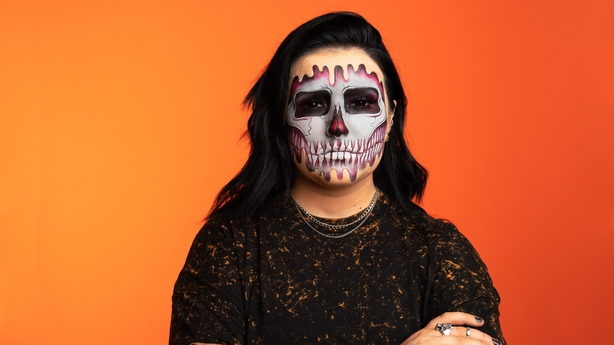 Glow Up Ireland has given Megan the push to get back into make up. She says she got a rush when she read the briefs and has looked forward to having the time pressure of the challenges to discipline her - otherwise, she would obsess over where to put the brush and not get it done as she’s a bit of a perfectionist.

Megan has used her Instagram presence to open up about her mum’s Alzheimers as she felt if her story could help someone else who might be struggling. 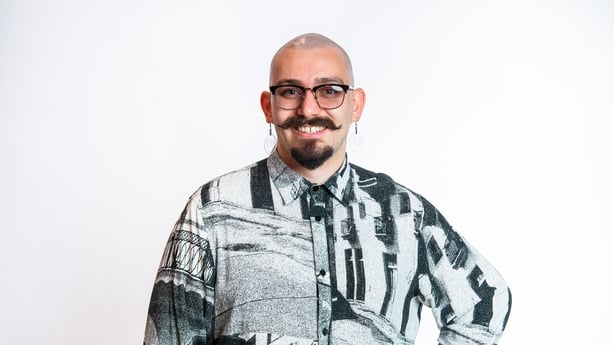 Representing the Liberties in Dublin, Glen Edward describes himself as a baker by day and a diva by night. In his own words, he's an "open, warm, horribly sarcastic and encouraging person".

Growing up in Dublin’s inner city wasn’t easy for Glen as an effeminate and creative young boy. Although his family always supported him, it was discouraged by the outside world. Despite this, he always had a strong sense of self and tried his best to always stay true to himself. 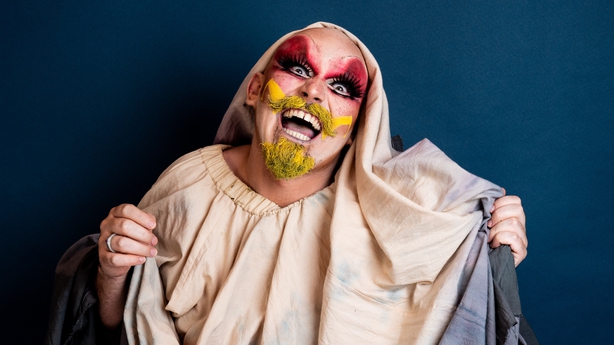 The 28-year-old specialises in theatrical make up and SFX/prosthetics. "Makeup in many ways has saved my life, it has helped me to express who I am and how I’m feeling even when I can’t understand these things, and has given me an outlet to become myself".

Glen was raised by his grandmother who sadly passed away five years ago. He says that she was his biggest supporter and best friend: "She loved to show off pictures of me in drag to all of her friends and that encouraged me to not let her down and continue to do what I loved." 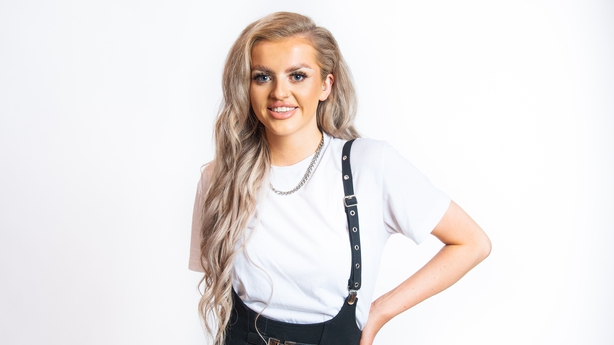 Leah is a 22-year-old mum who describes herself as "stubborn". The Tralee woman was diagnosed with rheumatoid arthritis and fibromyalgia last year and says that this has given her a wake-up call and a reminder that she has no time to waste.

Leah left school at 16 years of age, and says that she never had that group of girl friends to rely on. She became pregnant in college when she was 17 years of age and now has a four year old son called Rian. However, despite a full plate, she was determined to finish college. 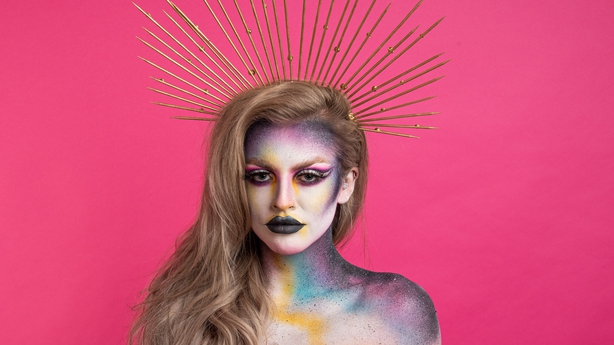 Her attitude is can-do and she is a ball of energy despite all that she has had to go through. She's a fighter to the end and even though she may get tired on long days, she’s adamant not to let her illness affect her.

Coming from a family that has more of a business background, she definitely doesn’t fit that mould and says "every aspect of me is outside the box". Luckily, she has her sister - who is her absolute best friend - to lean on. 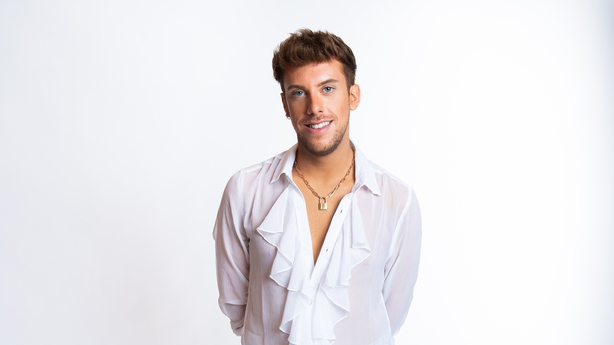 As a young, male teenager living in a sporty, masculine household in rural Ireland, Caolán found himself drawn towards the more feminine things in life.

Obsessed with women's beauty and how one can transform themselves with the power of cosmetics, he was hooked on make up once he tried on his mum’s Dior foundation at a very young age.

"Makeup was something I always loved and it was one of the biggest things that made growing up difficult but then turned into one of the best things in my adult life," says the 29-year-old. 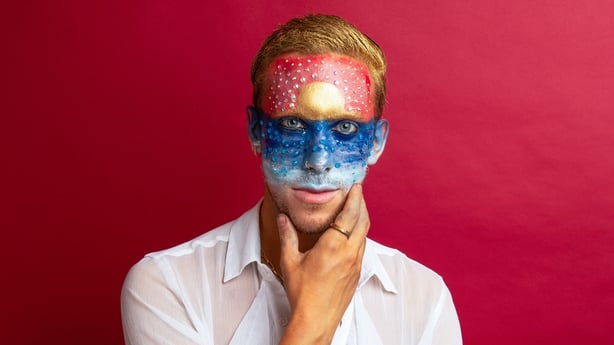 When Caolán left Gorey for London at 19 years of age, says he would only eat every second day so he could save up to purchase a product. A stand out memory for him comes in the shape of a Pretty Woman moment when buying a luxury item left him feeling very disappointed in how he was treated.

He vowed never to treat anyone the same way if he ever got into the beauty industry because he knows how hard it can to be to afford these items.

Caolán cites himself as being "a creative person who feeds off other creative people." As an MUA, Covid hit him hard but he feels it was a great time for self reflection and realising your own self worth. 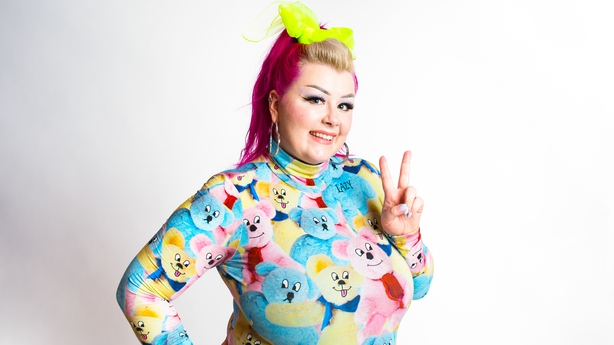 Laura bursts off the screen with her big personality oozing of fun and laughter. It is no surprise that she has amassed a following of nearly 57k followers on Instagram where she feels she has found her tribe.

A quick thrall through her social media accounts and the bright colours that pop off the pages are a good reflection of her personality: "I eat, sleep, and breathe makeup, and I love it with a fiery, burning passion!" 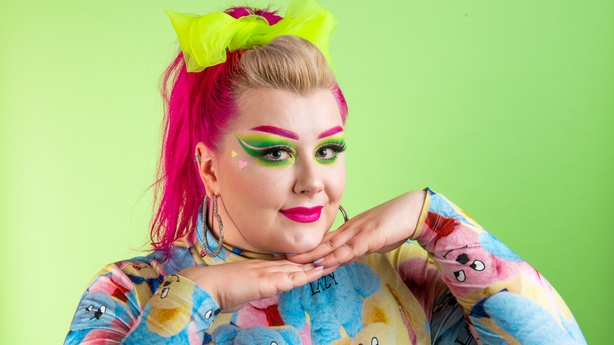 As a pansexual person growing up in the 90s, the 33-year-old says it wasn't common to see drag queens or even LGBTQIA+ people in society, but when she stumbled upon The Rocky Horror Show and it changed her life forever.

At the age 22 to she moved to London which led to her becoming a part of the thriving gay and drag community in the Soho area. She says she finally felt like she had found herself and has been happily living with her partner Rick for the past eight years. 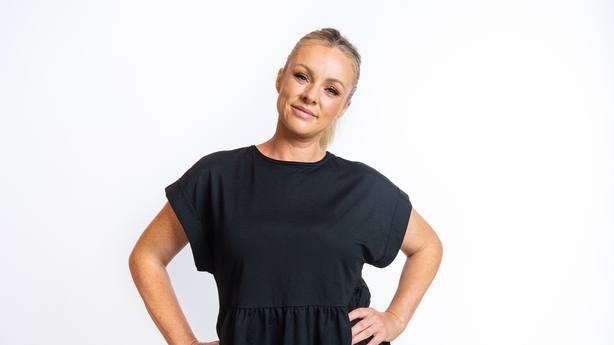 As a stay at home mum to 8-year-old Jack and 2-year-old Phoebe, Carol says that make up has always been a passion but was never something that she thought she could make a career out of.

The 43-year-old says she was artistic as a youngster and has always regretted not pursuing her dream to take make up course in Dublin. Now, in 2021, she is giving herself the chance she deserves and feels it is never too late to go for what you want in life. 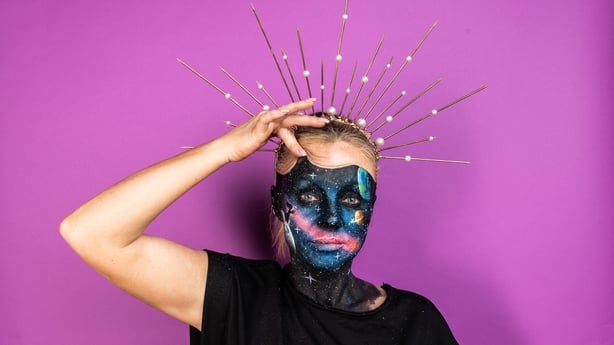 The Kilkenny woman is a perfectionist and says she has a huge fear of failure. She may be the oldest of the pack but in her own words she feels like she’s still 23.

Carol applied for Glow Up Ireland on a whim and says she is still pinching herself that she has been selected as one of the finalists. 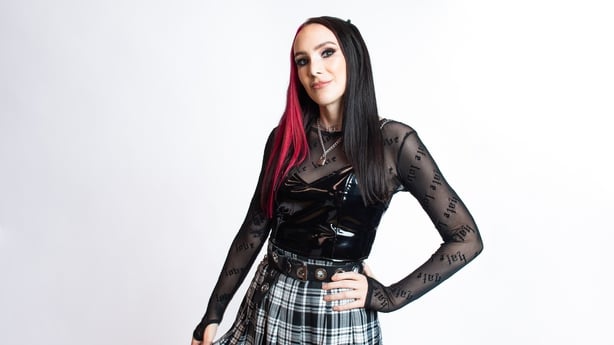 Graphic designer Marie is a self-taught make up artist and has been involved in multiple competitions. Her stand out moments include making it to the finals in the NYX UK Face awards and winning a scholarship to study SFX in Hollywood as chosen by Academy Award Winner Ve Neill.

"Makeup is much more than just makeup, it holds transformative powers to take you on a journey," says the 36-year-old. 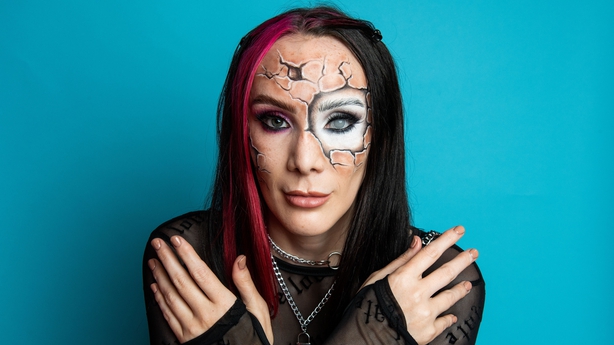 The Carlingford woman is chatty and confident and she has a special super power – even though she can't swim she can hold her breath for ages while working on a client’s make up "like a deep sea diver" so she doesn’t breathe on them.

She currently feels defeated by the make up industry and says "I'm just looking for the universe to give me a kick to reminds me not to give up." Thankfully, Glow Up Ireland has given her just that. 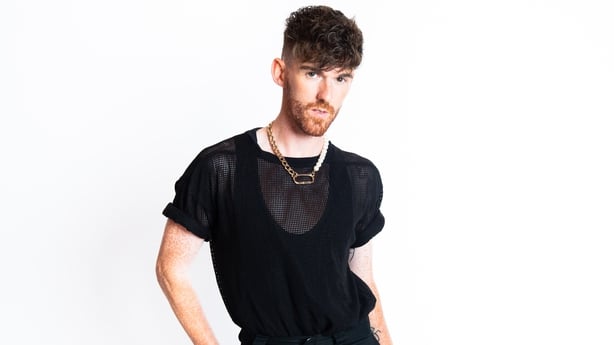 Michael Ryan aka Pixiewoo is a MUA, a drag queen and a DJ. Having built his brand and cultivated a strong following, Michael was forced to move back in with his parents at the age of 30 because of the pandemic.

The 30-year-old's childhood in Urlingford was a struggle for him as he felt different to the other boys around him. In college, he started to find his feet and dropped out of journalism to pursue make up.

"Growing up gay in rural Ireland meant I had to hide a lot of myself. When I discovered makeup it gave me a license to really embrace who I am and helped me connect with other people like me." 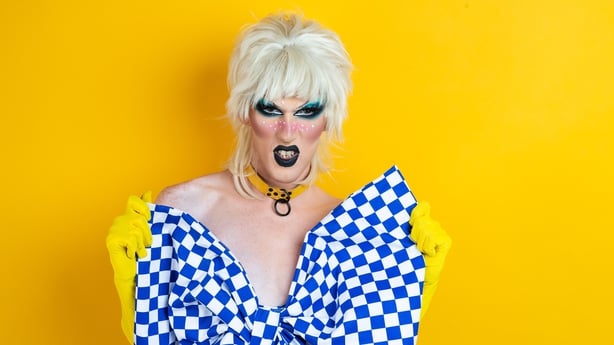 He came out to his parents when he was 19 years old and found his tribe when he lived with his Drag Mother in Dublin for 10 years and had a family of drag sisters. He says the queer community has been everything to him.

Mental health is also very important to Michael and he does youth workshops now to help younger people to "unpack the mental trauma in your 20s".

Watch Glow Up Ireland on Thursday, 2nd September on RTÉ2 at 9.35pm. 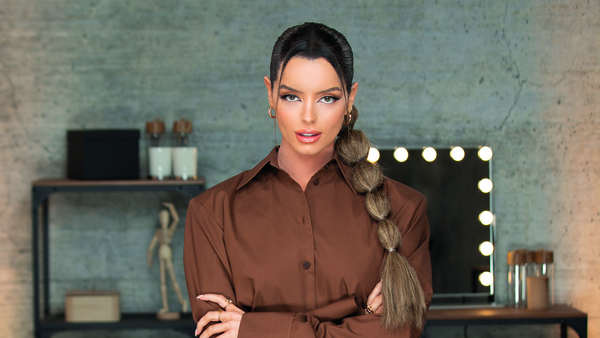 Maura Higgins: "I was like a boy racer growing up"