With such an unconventional ceremony, it wasn’t likely that the 35-year-old singer was going to wear a princess-style wedding dress. Instead, Allen kept things simple in a white double-breasted minidress with a boat neckline. She completed the vintage vibe with beehive hair and chunky black heels.

While big gowns still rule wedding fashion, there’s a growing trend for alternative outfits. This might be suits – like the mustard version Emily Ratajkowski wore for her 2018 wedding – or shorter styles, like Allen’s.

Keira Knightley kept things simple for her wedding to musician James Righton in 2013, wearing a tulle pale pink minidress from Chanel, paired on the day with a boucle cropped jacket, flats and a flower crown. Big, full-length wedding dresses aren’t exactly the kind of thing you can often re-wear, but Knightley showed short is the way to go and has since worn her dress again on the red carpet

In 2011 Nancy Shevell married Sir Paul McCartney at the Westminster Register Office in London, and she did so in a chic and simple white dress cut above the knees with long sleeves. The dress was designed by McCartney’s daughter, Stella.

On first glance, Poppy Delevingne’s dress doesn’t look like it would belong on this list – after all, it’s a two-tiered, full-length gown. However, the model’s white Chanel dress was multi-functional: the sheer underlay was detachable and, after the ceremony at her 2014 wedding to James Cook, she removed it and wore the white, capped-sleeve minidress on its own.

For her 1954 Swiss wedding to actor Mel Ferrer, Audrey Hepburn wore a white dress designed by Pierre Balmain. The style became instantly iconic with its tea-length, bell sleeves, high neck and gloves. While not exactly a minidress, this gown was definitely a shorter style than normally seen at weddings. This wasn’t the only time Hepburn wore an unusual wedding dress: for her 1969 marriage to Andrea Dotti she wore a Givenchy pale pink minidress, very much in the Swinging Sixties style.

Possibly inspired by Hepburn’s wedding dress in the film Funny Face, actress Zoë Kravitz’s gown for her 2019 nuptials was ballerina style with a drop waist, designed by Alexander Wang. Again, this isn’t the shortest dress you’ll see – but it’s certainly cropped and showed off her shoes perfectly.

Not only did Cilla Black shun a longer gown for 1969 wedding to manager Bobby Willis, but she also ignored the all-white tradition and chose a red velvet dress. The outfit was designed by John Bates, who was synonymous with hip Sixties style.

Cindy Crawford married Rande Gerber in the Bahamas in 1998, and a beach wedding calls for a more relaxed style of dress. The supermodel went barefoot to walk down the aisle with her hair in loose waves, wearing a short lace shift dress by John Galliano. 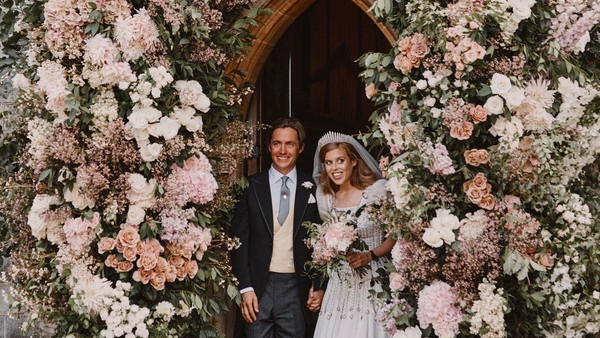 Everything to know about Beatrice's vintage dress and tiara