When Christmas rolls around, we usually pull out the big guns: the sparkliest dress, the reddest lipstick and that dazzling necklace you can only wear once a year. It turns out it's the same for Kate Middleton.

The Duchess of Cambridge stepped out in her most beloved and striking tiara at the annual white-tie Diplomatic Corps reception at Buckingham Palace, where she was the guest of honour alongside her husband Prince William, Prince Charles and Camilla, the Duchess of Cornwall.

The event hosted members of the diplomatic community, and so Kate pulled together a truly stunning outfit.

Looking regal and sophisticated, Kate stepped out in a navy velvet full-length gown by Alexander McQueen, featuring an unusual sculpted neckline that left just enough of a v-neck to show off her dazzling diamond necklace. The Nizam of Hyderabad necklace was gifted to Queen Elizabeth II in 1947, and is thought to be worth several million. 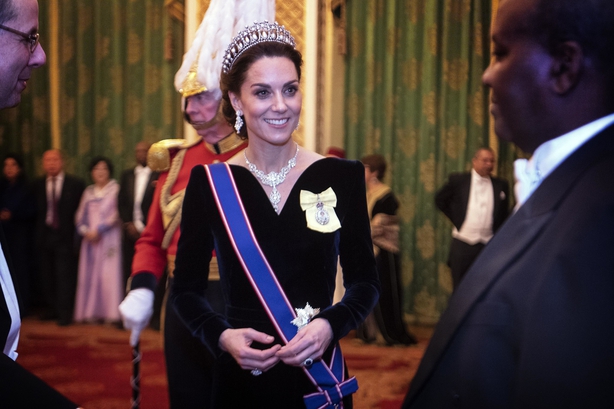 The long-sleeved dress immediately put us in mind of Christmas, but it was her tiara that stole the show: the Lover's Knot tiara, a shimmering diamond and pearl headpiece made famous by her late mother-in-law Princess Diana.

The tiara is a recreation of an older one owned by Princess Augusta of Hesse, known as the Cambridge Lover's Knot Tiara, which surely holds significance for the Duchess of Cambridge. It was originally commissioned by Queen Mary, Augusta's daughter, and was passed down to her granddaughter Queen Elizabeth.

The tiara was given to Diana as a wedding gift by the Queen, and quickly became one of her favourites. IT was placed in the palace vault until 2015, when Kate first wore it. Since then, she has worn it for every tiara-required occasion since, and last night marked her tenth time doing so.

The piece is certainly breathtaking, with a wreath of diamonds accented by dangling pearls.