The Man with The Moving House, Thursday, 25th August at 10.15pm on RTÉ ONE

This is the story of one man's crusade against a system that he feels doesn't work. It's the story of a small rural community threatened with wipe-out. But it’s also the story of how the bonds of community, a strong sense of identity and a deep love of place can generate a powerful energy in that fight.

Well-known musician and TV presenter Breanndán Begley was faced with homelessness in the village he was born and reared in as he battled with Kerry County Council for fifteen years to build a home on the family land at a massive personal cost of €25,000.

'The Man with the Moving House’ documents Begley’s fifteen year journey to build a small traditional home in his ancestral village on the Dingle Peninsula, as he highlights his plight and the much broader fight to save our culture, music, heritage and language. He says the soul of communities are being decimated as locals can no longer afford to buy homes that are being snapped up for holiday homes and Air Bnbs, or secure planning permission in the place of birth. 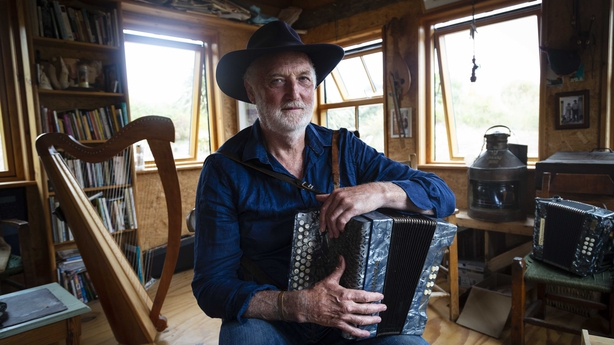 Producer Mark Mc Loughlin says "When I heard that Breanndán Begley was refused planning permission for a small house within a village, whose family had been there for hundreds of years it sparked my interest. I have been involved for many years in bringing issues to public attention through my work both nationally and internationally."

"Breanndán's story was being mirrored countrywide where people are being forced from their villages into cities that they don't want to live in. As Breanndán says, "people come here for the landscape but also the cultural value of the place - if you take the musicians, artists and Irish speakers out of the area, then there is nothing left."

As the story unfolds we see how his campaign touches the heart of the nation and captivates the attention of the media. The musician and native Irish speaker travels to other Gaeltacht communities and overseas finally bringing his protest to the Dáil, in a bid to bring light to a global issue – that of native people being allowed to live in their own communities and to maintain their culture and languages. And despite eventually receiving planning permission, he continues the campaign and sets up an organisation 'Todhchaí na Tuaithe' to fight for future generations including that of his own family.

This is a David and Goliath story, a story that resonates throughout the world and Breanndán is determined to fight on to the bitter end until it is finally resolved and the planning laws are changed. As he says, "Our community and culture must survive because without it we are nothing".

The Man with The Moving House, Thursday, 25th August at 10.15pm on RTÉ ONE