In 2020 the founders of a brand-new club, East Belfast GAA, hoped to change things by bringing people together and breaking down stereotypes through sport.

East Belfast has long been seen as a unionist stronghold and the GAA has always been associated with Irish nationalism. In 2020, however, the founders of a brand-new club, East Belfast GAA, hoped to change things by bringing people together and breaking down stereotypes through sport.

It all started with a single tweet sent by David McGreevy in May 2020. David and his friend, Richard Maguire, only wanted to start a GAA club for kids in east Belfast and sent out their social media message at 9.15am on a Sunday morning. They invited people from all backgrounds, beliefs and abilities to join their ranks. For David the response was much more positive than he expected, "A lot of the messages were, 'I've never played before, is it okay if I play?’ and we were just like, ‘well yeah of course it is, that’s who this club is for.’"

Richard was over-awed by the interest that first day and by the numbers willing to take part. The club currently has more than a thousand members from all backgrounds and walks of life.

Le Chéile, produced by Macha Media for RTÉ, with support from Northern Ireland Screen’s Irish Language Broadcast Fund, tells the remarkable story of East Belfast GAA. The programme follows the club during their first full year of play in 2021. Following months of inactivity due to Covid restrictions, we see the East Belfast GAA community getting back out onto the grass and setting out on their second year together as a club. 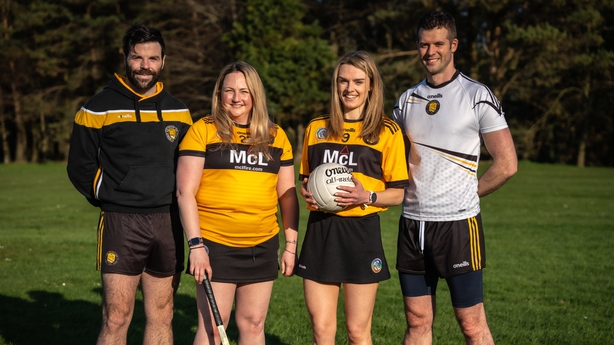 One of the players we meet is ex-soldier, Andrew McCammon. Hailing from Whitehead in Co. Antrim, Andrew is a former Second Lieutenant in the British Army and a committed Christian. Growing up, Andrew had no experience of Gaelic games or the Irish language but while serving as a dental officer in Germany, he was inspired to learn more by his comrades from Scotland and Wales. On leaving the army, Andrew signed up for Irish classes in the Turas Irish language project, organised by the East Belfast Mission of the Methodist Church in Ireland. Andrew heard about East Belfast GAA through his Irish class and was immediately interested. With the club, Andrew has found a new passion in hurling and has made a whole new circle of friends.

One of Andrew’s new teammates is GAA stalwart Irial Ó Ceallaigh, a hurler from Waterford. Irial moved to Belfast, his mother’s native city, in 2020 and has been involved with the club from the very start, having been the club’s development officer for the past two years, but he doesn’t underestimate the challenge of growing a club in east Belfast.

A staunch Protestant, unionist and Irish language activist, Linda Ervine is the club’s first President. Linda is director of the ‘Turas’ Irish language project and welcomes the inclusion and promotion of all cultures within the club.

Kimberly Robertson hails from Boston, Massachusetts, and has fallen in love with Gaelic games. Never having played before, Kimberly joined East Belfast GAA in an attempt to embrace Irish culture and make new friends. Kimberley cannot imagine life now without the GAA and has recently been appointed chairperson of the club.

Despite losing almost every match in their first year, East Belfast GAA is now a force to be reckoned with in County Down. The documentary attends training sessions and competitive matches in league and championship, witnessing victories, injuries and defeats in crucial games. Without even a pitch to call their own, Le Chéile shows the determination of the East Belfast GAA community and their passion for Gaelic Games as they strive to achieve success.

The series ends at the club’s first annual Awards Ceremony, with reflections on the journey so far and on lasting friendships made. As outgoing chairperson, Richard Maguire puts it, "Whether celebrating successes or lamenting losses, East Belfast GAA will continue to welcome members from all walks of life, regardless of ability, gender, background or belief. East Belfast GAA is making history, together."

Le Chéile, meaning "together", will be broadcast on RTÉ One at 8pm on Monday 13th June and Monday 20th June, and on the RTÉ Player.