There have been some fine fictional films of late on the subject of hijacking at sea, notably the spell-binding Danish film Kapringen (A Hijacking) and the Paul Greengrass-directed Captain Philips which won a number of awards.

Last Hijack  - in Somali with English subtitles - differs in that it is a documentary whose participants enact scenes. Some enact them better than others, it must be said, and rather than rely wholly on this arrangement, Nicky Gogan and Caroline Campbell from Irish production company Still Films have produced a supplementary animation narrative, based on original oil paintings which have been digitized.

The background is the Somalian Civil War which has raged for over 20 years in a country which has become a breeding ground for piracy. Since 2008, hundreds of pirates have attacked vessels in the Indian Ocean. 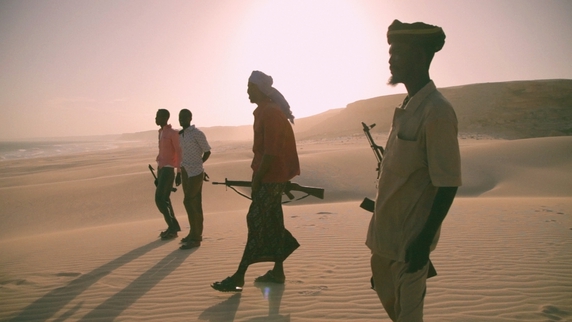 Mohamed, the central character, is a disappointment to his family, having opted for the life of a pirate, and thereby neglected his children who are looked after by his parents. Moreover, the tide has turned against one-time local heroes such as Mohamed, the glory days appear to be over, the days when vulnerable cargo ships could be taken unawares. Ransom deals secured millions of dollars, deals which Mohamed was in on as a principal player, money which got shared out back home in poor Somali villages.

Now he resembles a talented boxer who is past it, who knows that if he continues he could be shot dead on sight, as ships are much better prepared. Yet he is still toying with a plan for the one Last Hijack of the title. He duly sets about recruiting a crew, who join up for a variety of reasons, to sort out debts or for the drama or adrenaline rush. 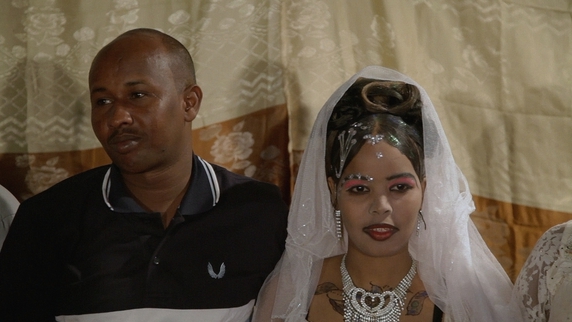 Mohamed and his bride on their wedding day

The truth is that behind all the shallow trappings accrued from hostage-taking, Mohamed is a troubled individual. You can see it in his demeanour, as he chews ravenously at some meat, while downing a bottle of Coke. In the animation scenes, which show a younger Mohamed, he is trim and lithe. Now his parents want him to settle down and marry, as he is engaged to a local girl. Has Mohamed a chance to redeem himself through marriage or will he undertake the last hijack of the title and perhaps jeopardise that fresh start? 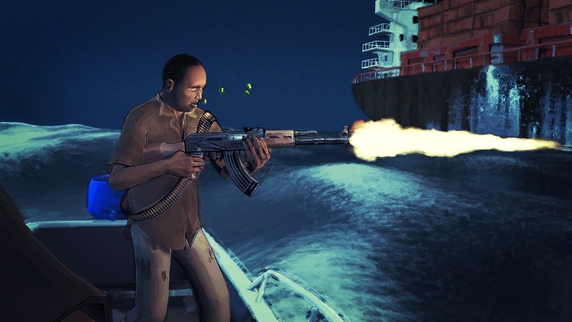 Mohamed’s father may preach to him and tell him he is a disgrace, but the fact is that he himself was a thief. He too engaged in piracy of a sort, pretending he had car trouble on a remote country road. He would tell his son to hide in the trees, before holding up a passing car and robbing the travellers of their possessions. The image of Mohamed hiding in the trees, as depicted in the animation, is one of the saddest scenes in the film. We watch the boy’s confused bewilderment as he look at his father engaged in daylight robbery. After this you begin to understand what might have made Mohamed the man he is.

Last Hijack is a film about greed and the fecklessness that comes with too much money and little sense,  and it is also a film about cruelty and psychopathic behaviour. One of the most startling pieces of artwork is the scene in which a European man is dumped into the sea before the pirates' motor boat speeds off, dollar bills flying hither and thither in its wake.

The film comes from the team responsible for A Scanner Darkly and Waking Life and it won a Digital Emmy Award for Best Non Fiction production. It won two awards for Best International Transmedia Project at the Tous Ecrans Festival in Geneva along with winning the Prix Europa 2014 for Best Online Project at the Berlin Film Festival. Relentlessly brooding and engaging, it is certainly worth seeing.