Surely at this stage we have run out of variations on the "mindless good fun" cliche. The guilty pleasure recommendation of “nonsense but entertaining nonsense” that rolls around every summer blockbuster season.

The latest part of the X-Men saga is just plain nonsense. Not entertaining nonsense, not guilty pleasure nonsense - just plain nonsense. It's a confused and catatonic cash-in that blithely cherry picks elements of The Terminator, The Matrix, and maybe even Transformers to gather together, Avengers-style, the whole X-Men mutant crew in a final battle across time zones and generations.

The sexy ensemble (blue Hammerite lady, hairy bloke with dodgy fingernails, and conflicted metallurgist bloke) do goodly battle with The Sentinels, giant robots developed by Dr Bolivar Trask, a cunning industrialist who has outfoxed even the Nixon administration in his messianic campaign to develop his fighter bots as the ultimate weapon against the growing scourge of the X-Men muties.

Meanwhile, as it were, in the future we find chuckle brothers Magneto and Xavier (Patrick Stewart and Ian McKellen) cloistered in a gothic citadel and gravely intoning that final destruction is at hand as these flying Sentinels swarm above them. The only way to save mutant-kind is to change the course of history.

Here’s the science bit -  the boys and girls have to send Wolverine’s consciousness (don’t worry you get the bod and the hair too) back in time to groovy old 1973 so he can prevent renegade mutant Mystique (Jennifer Lawrence looking red hot in blue) killing Trask, thus turning him into a martyr and actually hastening, not hindering the development of The Sentinels.

Now 1973 was a pretty interesting place. The Vietnam War was finally coming to an end, lava lamps were in, and the music was lush and funky. The sight of Wolverine gunning a sexy Chevrolet around town has its own charms and the tired old time paradox device also throws up the seemingly delicious prospect of the younger mutant ying and yang of Xavier (McAvoy) and Magneto (Fassbender) warring with each other with Wolverine as the peace maker trying to convince them that the future won’t be too bright if they don’t band together.

Stewart and McKellen have very little to do but stare pensively into the Shakespearian gloom as events unfold in the past but as their younger selves, McAvoy is at his soulful and doleful best while the lithe, cat-like Fassbender is at the centre of some of the best action sequences as he literally bends events to his own conflicted will.

Director and X-Men veteran Bryan Singer once again does well to balance character interaction with spectacular action. Lawrence adds further star wattage and Jackman will forever be Wolverine but even these established characters have their thunder and mutant quirks stolen by new addition Quicksilver (Evan Peters), a speed freak who adds much needed vim to a turgid yarn which eventually crumbles under the portentous sense of gravitas.

Fan boys and girls with an encyclopaedic knowledge of the lore, back story and history will love it. However, notwithstanding the brilliant use of Jim Croce’s Time in a Bottle and a batty finale involving RFK Stadium and President Nixon, even the most casual guilty pleasure thrill seeker may conclude that X-Men have finally jumped the quark. 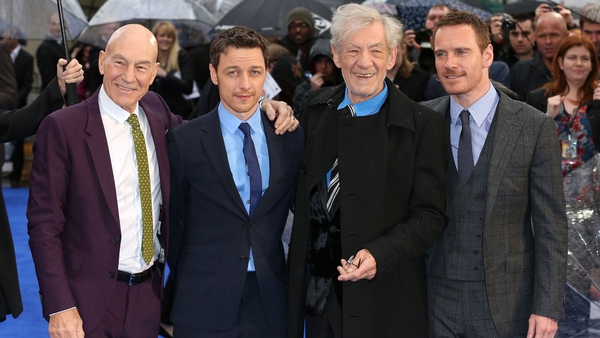