Entrepreneur and influencer Suzanne Jackson and her professional dance partner Michael Danilczuk received the highest score of the night in week two of Dancing with the Stars on RTÉ One and the RTÉ Player.

The couple scored 25 points for their Viennese Waltz.

When week one and week two's scores were combined, Suzanne and Michael joined singer Brooke Scullion and her professional partner Maurizio Benenato at the top of the leaderboard with 48 points. Brooke and Maurizio scored 23 for their Quickstep on Sunday.

It was a night that saw former Ireland rugby international Shane Byrne leave the judges stunned after his three cartwheels and 2FM presenter Carl Mullan hailed as the "most improved" performer.

The judges' scores and viewers' votes will now be combined ahead of the first elimination next Sunday night.

Dancing with the Stars, Sundays, RTÉ One and RTÉ Player, 6:30pm

The story of the night:

Head judge Loraine Barry said she was "so impressed" with the couple, as they had set the bar "way high", but she also said she wants more finesse from Brooke. 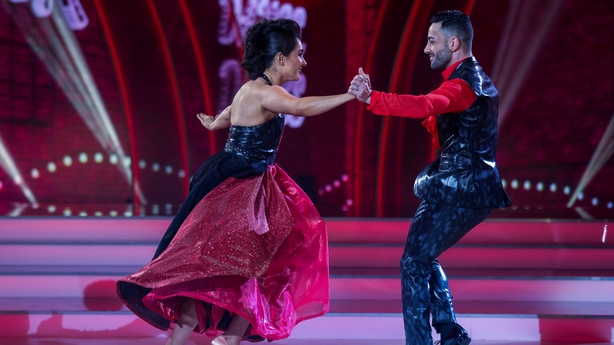 Brian Redmond said the energy was "fantastic" but Brooke was a little "tense through the body". Brooke and Maurizio received 23 points from the judges.

Next up were actor Damian McGinty and his professional partner Kylee Vincent, dancing the Salsa to Jason Derulo's Acapulco.

Arthur Gourounlian saluted Damian for his lifts and versatility but added that he needs to work on his freestyle. 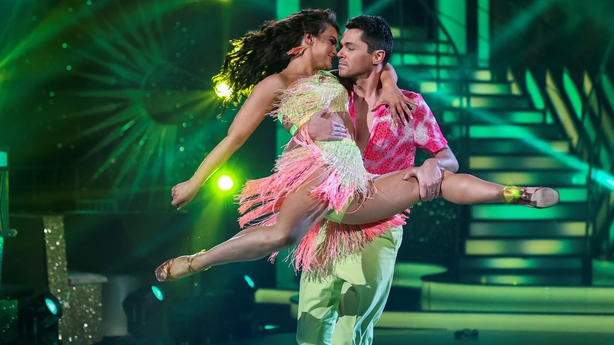 Brian Redmond said Damian's top half was "absolutely brilliant". The bottom half needs work, as it looked like Damian had "sand in his shorts".

Loraine Barry saluted the couple's interaction but wants the transitions to be seamless in the weeks ahead. Damian and Kylee received 20 points from the judges.

The third couple of the night were Dr Marie Cassidy and her professional dance partner Stephen Vincent, dancing the Tango to Olé Guapa.

Brian Redmond saluted the couple's bravery and the purity of their content. He wants to see more "power" from Marie but concluded his assessment with a "well done". 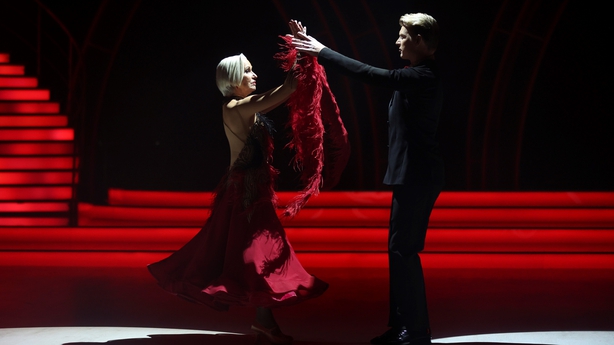 Loraine Barry wanted more "staccato danger" in the performance. She urged Stephen to push Marie more, as she has the ability.

Arthur Gourounlian said the choreography was "beautiful" but wants more passion from Marie, as she could be "incredible". Marie and Stephen received 16 points from the judges.

The fourth couple to perform were comedian Kevin McGahern and his professional partner Laura Nolan, dancing the Jive to The Overtones' Reet Petite.

Loraine Barry said it was a "great Jive". She added that Kevin needs to work on his support leg when he's jiving. 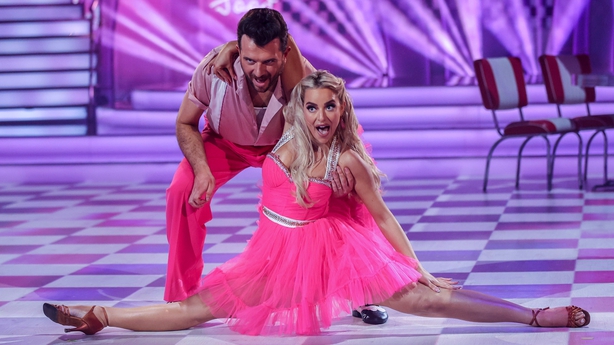 Brian Redmond didn't like the position of Kevin's head in the routine. He saluted the "great content" and said it was "really solid" - "just watch the feet". Kevin and Laura received 21 points from the judges.

Jivin' their way through week 2, @kevinmcgahern and Laura have scored 21 points from our judges! 💝 #DWTSIrl pic.twitter.com/hY5pw5OYLG

Arthur Gourounlian said he wants Stephanie to "embrace her height" in the weeks ahead. 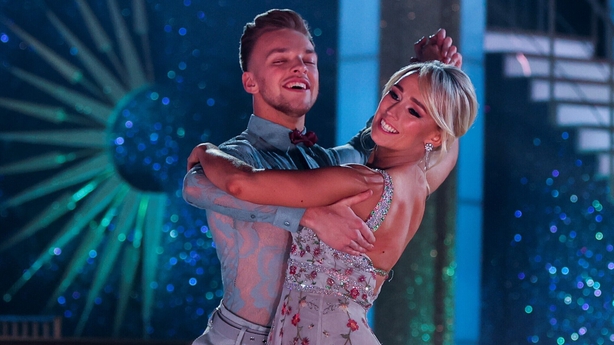 Brian Redmond said there were "gaps all over the place". He said Stephanie's top half has improved, and he wants more "relaxation" in the routines to come.

Loraine Barry said Stephanie had "really improved". "This is your moment, start shining more," she concluded. Stephanie and Ervinas received 13 points from the judges.

The sixth couple of the night were actress Leah O'Rourke and her professional partner John Nolan, dancing the American Smooth to Natalie Cole's This Will Be (An Everlasting Love).

Brian Redmond said there was too much "stepping". He said Leah looks "really nice" in hold but needs "more power" in her performances. 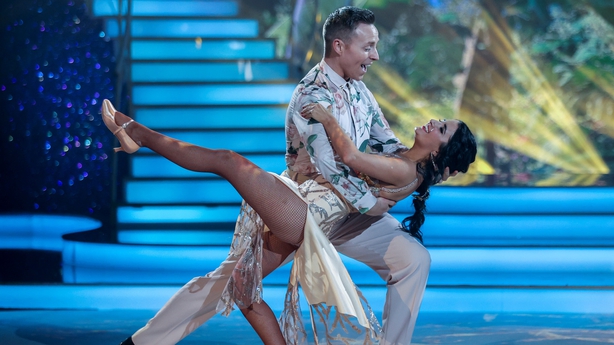 Loraine Barry described Leah as a "really good actress" who has to let herself go more on the dancefloor.

Arthur Gourounlian saluted the routine's three lifts. He said it was a "little bit stumpy" but stressed that it was only week two. Leah and John received 10 points from the judges.

What a smooth number for the fabulous Leah and John 🌸 10 points! #DWTSIrl pic.twitter.com/dPsEZtrlmj

Loraine Barry was gobsmacked, saying she had never seen three cartwheels in a routine in her whole career. 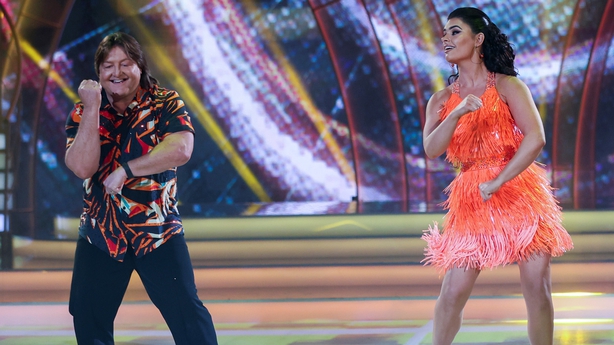 Brian Redmond said Shane had taught him something - to be very careful what you wish for, having asked Shane for "more entertainment value" after the week one dance. He added that there was "not very much Cha Cha". Shane and Karen received 12 points from the judges.

They've cartwheeled and cha cha cha’d into our hearts all over again - 12 points for Shane and Karen! #DWTSIrl pic.twitter.com/8XIHKCE7jT

The eighth couple of the night were former Dublin star Paul Brogan and his professional dance partner Salome Chachua, dancing the Samba to Sean Paul's Get Busy.

Arthur Gourounlian said it was "steamy" and "hot". He said Paul knows the steps, and now he wants him to "let loose". 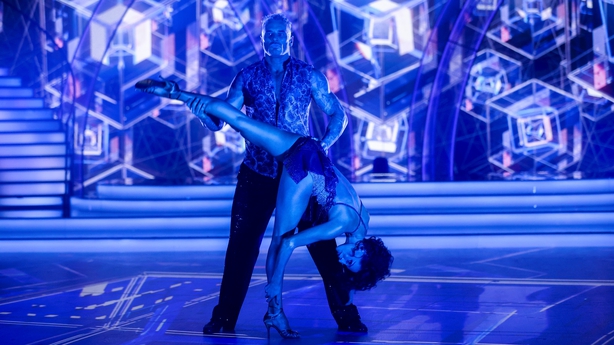 Brian Redmond saluted the "quite clever choreography" from Salome, as Paul did not do "much Samba".

A sultry samba from Paul and Salome - we can't wait for next week already! 14 points 🔥 #DWTSIrl pic.twitter.com/KP4l6IfvMN

The ninth couple were drag legend Panti Bliss and her professional dance partner Denys Samson, dancing the Waltz to Aretha Franklin's (You Make Me Feel Like) A Natural Woman. 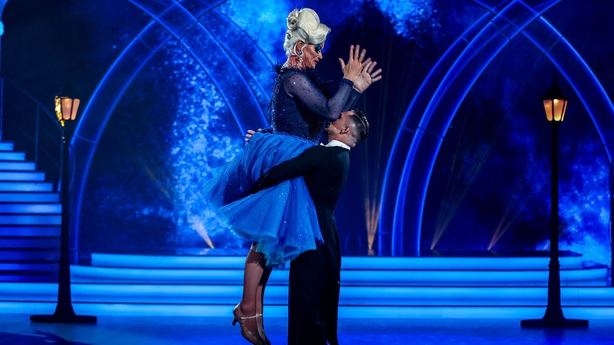 Loraine Barry said everything was "so soft and beautiful" but wants "a little bit more drape" from Panti in the shows ahead.

Arthur Gourounlian said it was what the Waltz is all about and hailed a "great partnership". He concluded by describing Panti as a "natural dancer". Panti and Denys scored 19 points from the judges.

A waltz wonderfully fit for a Queen 👑☘️ - and a pretty 19 points to boot! #DWTSIrl pic.twitter.com/DVI2wNrbW9

The tenth couple of the night were entrepreneur Suzanne Jackson and her professional dance partner Michael Danilczuk, dancing the Viennese Waltz to Rihanna's Love on the Brain.

Loraine Barry said the storytelling and choreography were "beautiful", and she can't wait to see what Suzanne does next. 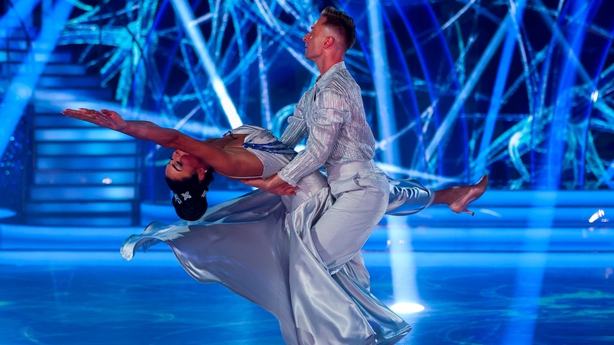 Arthur Gourounlian said Suzanne is the one to watch in the competition.

Brian Redmond said there were issues with "small details", and if Suzanne corrects them, then Arthur might be right. Suzanne and Michael received 25 points from the judges.

A victorious Viennese waltz for Suzanne and Michael, earning an impressive 25 points from our judges! #DWTSIrl pic.twitter.com/yMIEpYlV7S

The final couple of the night were presenter Carl Mullan and his professional dance partner Emily Barker, dancing the Paso Doble to U2's Beautiful Day.

A delighted Arthur Gourounlian said Carl's "likeability meter" is off the charts. 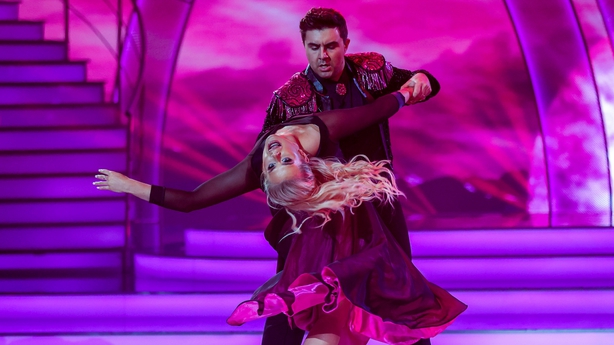 Brian Redmond loved the characterisation and Carl's use of his arms. He said it was a "pure Paso".

Loraine Barry gave the couple a standing ovation and said it was "excellent" and the "most improved performance" of the night. Carl and Emily received 23 points from the judges.

A 'Beautiful Day' indeed for Carl and Emily with 23 points for their passionate Paso! #DWTSIrl pic.twitter.com/8ms66CytfG