Bristol-based rock trio Krooked Tongue have released their new single, When The Beaches Bleed. We asked them the BIG questions . . .

It's the follow-up to their debut EP No Vacancy Hotel and speaking about the new song, vocalist and lyricist Oli Rainsford says, "Beaches, to me, is the ultimate homage to something I've always been in awe of.

"Big wave surfing is next level crazy and it’s an art that carries with it, high risk. This song is a tip of the hat but also, I think, doubles as a notion to not be scared to take risks and also not to fear failure.

"It’s a cosmic 'f*** you, try it again’ that we often need to be encouraged to carry out. Confidence is key."

We are Oli (vocals, bass), Dan (guitar), and Harry (drums). We’re a three-piece rock band based in lovely old Bristol. We’ve just released our new single, When the Beaches Bleed.

Ah, the dreaded ‘genre’ question. I guess we’re somewhere in the ether of alt rock, but it’s a tough one for us to nail down with certainty. You can listen and decide for yourselves, it’s much more fun that way.

We all have our own inspirations as a band collectively, but sonically some of our main influences are bands like Highly Suspect, Death from Above, Cleopatrick.

Oli: In terms of writing, and especially lyrics, I take lots of inspiration from people like Kelly Jones (Stereophonics) and Ray Davies (The Kinks) in terms of style. I like to write most of my lyrics observationally, as the bird’s eye view. Although, in terms of the more obscure and metaphorical, writers like Leonard Cohen, John Lennon and I think I was about 14 when AM by Arctic Monkeys came out, and I remember just losing myself in the phoneticism of Alex Turner’s adjectives.

Oli: I think it was probably Rod Stewart at the NEC. Harry: The Who. Badass, I know. Dan: My first gig was watching a band called Dorje in Plymouth at the Underground.

Dan: Hybrid Theory by Linkin Park. Such a sick album! Oli: With my own money, I think it may have been In Between Dreams by Jack Johnson. Harry: Kings of Leon, Only by the Night!

We’re really digging the latest Show Me The Body tune, but all their stuff is great, to be fair.

There’s too many to choose from but let’s agree that Nas’s ‘I never sleep cause sleep is the cousin of death’ is as sick as they come.

We’d have to say Seretonia by Highly Suspect. We could listen to the guitar solo in that song until the end of days. 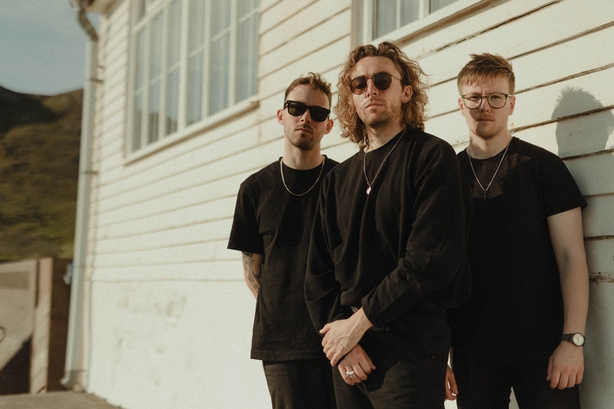 You can find us on all the social medias @krookedtongue, we use Instagram mainly but you can follow us on them all. Same applies to streaming services. Spotify is our main outlet, where you can also pre-save our single, When the Beaches Bleed. For Merch, you can find us on Bandcamp and for ticket info just follow the links on our socials or check in with ENTS 24.