Johnny Depp said he was "obsessed with the truth" as he took to the stand to give evidence in his US defamation trial against former wife Amber Heard.

The actor told a Virginia courtroom that Ms Heard was bringing "heinous and disturbing" allegations against him and it was "diabolical" that his children had been exposed to them while at school.

Mr Depp is suing the Aquaman star for libel over a 2018 article she wrote in The Washington Post, which his lawyers say falsely implies he physically and sexually abused her.

"It was a complete shock… it just didn't need to go in that direction as nothing of the kind had ever happened," he said, speaking in court on Tuesday.

"(In) the relationship there were arguments and things of that nature, but never did I myself reach the point of striking Ms Heard in any way, nor have I ever struck any woman in my life."

Mr Depp said at the time the accusations had "permeated" the entertainment industry and had become a "quote, unquote fact".

"It’s been six years of trying times, very strange when one day you’re Cinderella, so to speak, and then in 0.6 seconds you’re Quasimodo," he said

"I didn’t deserve that, nor did my children, nor did the people who have believed in me all these years.

"I pride myself on honesty… on truth. Truth is the only thing I’m interested in.

"Lies will get you nowhere, and lies build upon lies… I’m obsessed with the truth so today is the first opportunity that I’ve been able to speak about this case in full."

The actor, who wore a dark suit and light-coloured paisley tie, said the case would be "exposing" both for him and Ms Heard.

"It never had to go in this direction," he said. "I can’t say I’m embarrassed because I know I’m doing the right thing."

Mr Depp said he had initially thought his relationship with Ms Heard had been "too good to be true" but had noticed things that "might be a bit of a dilemma at some point".

He told the court that Ms Heard developed a "routine" when he came from work of giving him a glass of wine and taking his boots off, and that she had become upset when he once disrupted it.

"There were a couple of things that… stuck in my head that I noticed that I thought might be a bit of a dilemma at some point," he said.

Mr Depp explained that after the success of the first Pirates Of The Caribbean film he was forced to increase his security to protect his family.

"I've had worse jobs… (but) you realise that anonymity has left the building," he told the court. "It does mean you have to think creatively when you have little kids on how to take them to the park or the swings.

"It becomes a strategic mission."

He added: "Security guards kind of multiplied because you need to protect your street, your house, your kids. Endless."

Mr Depp said his use of various substances had never been "for a party" but rather to "numb myself of the ghosts, the wraiths" from his youth.

He said his "substance abuse" had been "grossly embellished" by Ms Heard and that many of her allegations were "plainly false".

The actor told the court his drug-taking had started at the age of 11, where he took his mother's nerve pills "to escape feeling so much". 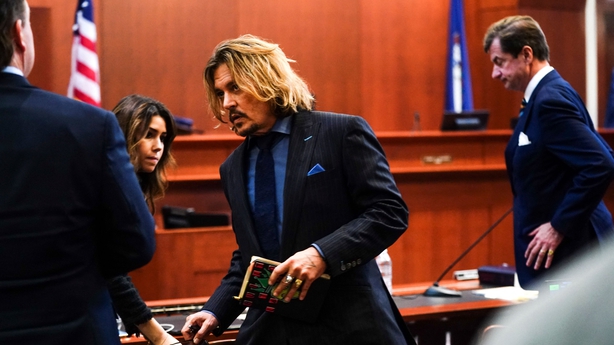 "(It’s) a pretty young age to do that, I can’t say that I’m proud of admitting to that but I have to say that I knew not what else to do," he said. "I’ve never used (the word) party in my life, I’ve never taken any substance for a party.

"I have taken these substances over the years, on and off, to numb myself of the ghosts, the wraiths that were still with me from my youth."

He added: "The characterisation of my 'substance abuse’ that’s been delivered by Ms Heard is grossly embellished and, I’m sorry to say, but a lot of it is just plainly false."