The Prom star Kerry Washington has told RTÉ Entertainment that playing intransigent parent Mrs Greene in the musical-comedy gave her a reminder about bringing up children in real life.

The new film from Glee co-creator Ryan Murphy tells the story of two Broadway stars (Meryl Streep and James Corden) and two struggling actors (Nicole Kidman and Andrew Rannells) who think they can revive their careers by travelling to a conservative small town in Indiana to support Emma (newcomer JoEllen Pellman), a lesbian student who is not allowed to bring her girlfriend Alyssa (Ariana DeBose) to the high school prom.

Washington's character, Mrs Greene, is the head of the parent-teacher association and opposes the prom.

When asked by RTÉ Entertainment what The Prom had taught her, Washington replied: "I would say I learned two things about myself from playing Mrs Greene. One, is that I really, really, really find so much joy in singing. It's not one of the things I'm best at in life, but to have the permission to do it was really important for me.

"It was an important reminder that sometimes we have to do the things we love to do, regardless of how good we are or not [sic] at it! I'm not a terrible singer, but I know how much joy I get from doing it, so it was a really good reminder and something that I'm trying to carry forward with me."

"Every mother knows that the practice of parenting is so much about letting go," The Scandal star continued.

"I would have tremendous acceptance for my children, regardless of sexual orientation or gender identification. If there was queer activity happening in my kids, amen, halleluiah, great - I want to love them for who they are.

"But no matter who you are as a parent, there are things you hold on to - ways that kids should do things. Whether it's tie their shoelaces, what time they should be asleep, whatever it is.

"That reminder to ask myself, 'What more can I do to meet my children where they are in a given moment?' Even in this working-from-home world, where it's like I want them to understand, 'This is when mommy's working' and I'm trying to do homeschooling - the frustration can be so close.

The Prom is streaming now on Netflix. 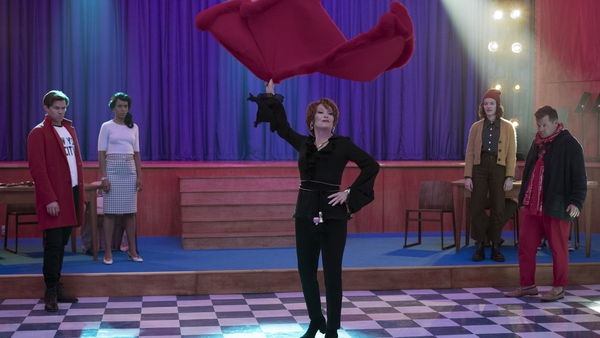 Meryl Streep was in for a land with The Prom dancing