A restless spirit and the other half of no-man with prog lynchpin Steven Wilson, Tim Bowness has just released his new solo album, Late Night Laments. He tells Harry Guerin about its dark matter.

Harry Guerin: Brilliant - and fitting - album title. Where did it come in the process?
Tim Bowness: Thanks. Like a lot of things with this album, the title came to me almost straight away. As soon as I'd written the first track for the album - One Last Call - the song's combination of atmospheric music and political lyric set the agenda. Sometimes album's dictate themselves and after I'd written One Last Call I knew that I wanted to make a whole release investigating very specific moods and sounds. As I wrote a lot of the music in the wee small hours, Late Night Laments was a working title that stuck.

What can you tell us about the room on the cover?
Like the title, the cover came to me quickly. I explained what I wanted to Jarrod Gosling, the cover artist - including the face mask image on the TV, the LPs, the chair, the record player etc - and Jarrod took it even further. The character on the front cover is an imaginary Jarrod self-portrait from 2030 and the room is partly based on his 'listening space'. Detail upon detail piled up and initially we used actual album covers. Sony lawyers soon dissuaded us from going down that route! Patti Smith's Easter, The Blue Nile's Hats and Joni Mitchell's Hejira were very visibly a part of the cover at one point.

The first time I saw it, I wondered, 'Is it meant to signify someone's mind'?
You have a good point, and in some ways I think the album could be seen that way. From the beginning, I very much imagined the album as a late night headphone listening experience and saw it as representing someone - existing in a small world  of favoured 'comfy chairs', records, films and books - lost in a beautiful sensation, while hearing the sound of the news murmuring away in the background. In the era of 24 hour news channels and social media, it's harder than ever to escape the march of history and a lot of current themes - generational divides, hate crimes, political extremes, terrorism and more - found their way into the songs. 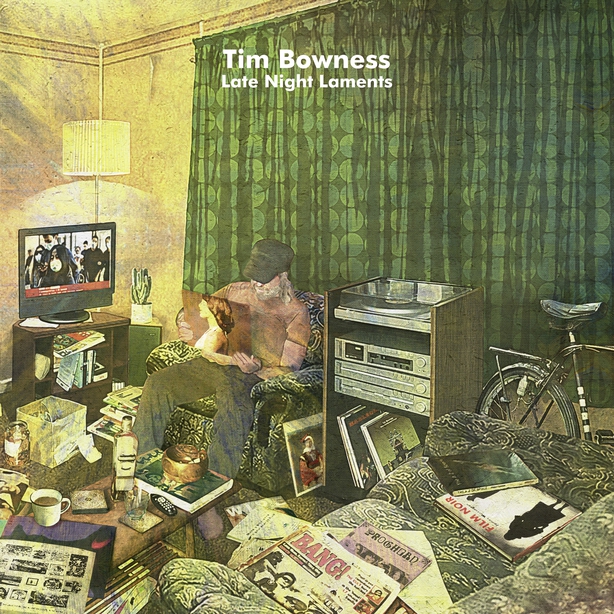 These songs are very raw emotionally but sound lush. Have you come to see them in a different way over the past six months with all that has happened?
I finished the album on the day lockdown was announced in the UK and it was great timing in that I couldn't have done any more recording after that point - mostly due to the terror that is home-schooling! Initially, I was worried that the themes might seem irrelevant in the face of the global viral crisis, but as the pandemic went on, the lyrical themes seemed more - rather than less - relevant. I think you're right that the music is quite warm, atmospheric and lush, while the themes are pretty harsh, the emotions are undeniably raw. It's the sweetest of bitter pills!

You mentioned The Blue Nile - the album put my heart in the same area as when I listen to them. Who else has been important to you over the years?
The Blue Nile are one of my all-time favourite bands and Calum Malcolm - the band's engineer and co-producer - mastered Late Night Laments. There's a wonderful sense of yearning in Paul Buchanan's brilliant voice that I'm still drawn to. As The Album Years - the podcast I do with Steven Wilson - suggests, I have very eclectic tastes that encompass many genres and moods - anything and everything from R&B to Classical Minimalism, Indie to Electronica, Jazz to Prog, contemporary to ancient. Historically, the spiritual heirs to the sort of music I make are probably the likes of The Blue Nile, Talk Talk, and David Sylvian.

Have listeners latched on to new songs in particular? What have they said about those songs?
I think because of the consistency of sound and tone, people have embraced the album as a whole. That's a positive for me, as I take the idea of the album as statement seriously. I want to create an immersive world of music, lyrics and cover imagery that people can completely lose themselves in for 40 minutes. In terms of individual tracks, I'd say Northern Rain, I'm Better Now and Darkline have possibly become the pieces most discussed on Facebook.

Going back to the album title, are there particular songs that you remember listening to on the radio as a kid, or on a Walkman in your twenties, during those wee small hours?
Lots! When I was very young, it would have been the likes of Sparks, 10cc and The Beatles that interested me, plus the film music of John Barry and Bernard Hermann. In my teens and twenties, it would have been anything from John Martyn to Magazine, Weather Report to Roxy Music, Nico to Nina Simone and lots more.

If you could send a message back to yourself on those nights, what would it be?
Worry less! That said, I might say that to myself at this very moment in time as well!

And in the here and now, what did this album teach you about yourself?
Perhaps that wholly following instinct is the best approach. This album came out very naturally with very little interference from me. Usually, there's more of a sense of me forcing myself to experiment in certain ways - mostly in order to avoid repeating myself - but this time I left what I wrote as it initially came out. First thought, best thought.

Have you a sense of where you're going next in your music?
At the moment, I've no idea. During the pandemic, I've recorded a few cover versions for fun and co-created the Album Years podcast. I wanted to let this album linger before immersing myself in a follow-up project. Generally speaking, I tend to either completely reject what I've just done or take it even further. As an example, this album was the opposite of my last couple of releases, one of which was very eclectic, the other being very electronic and beat-driven. Clearly, after this I'll either be dabbling with joyous K-Pop or Scandinavian-flavoured Doom Metal!

Late Night Laments is out now on Inside Out Music.