An Irish pub has hit back after a negative review appeared in The Sunday Word's Pub Spy column in which they criticised the Co Offaly institution's rustic decor.

The column gives JJ Hough's pub in Banagher a measly two out of five stars and describes the experience of visiting it as "eye-opening". But not in a good way, it seems.

"Framed MMA gloves look to be the only thing anyway new in a pub that quite possibly has never received a makeover. The bare concrete floor is still visible," the review reads.

"We left after one drink scratching our heads and wondering if that really just happened." 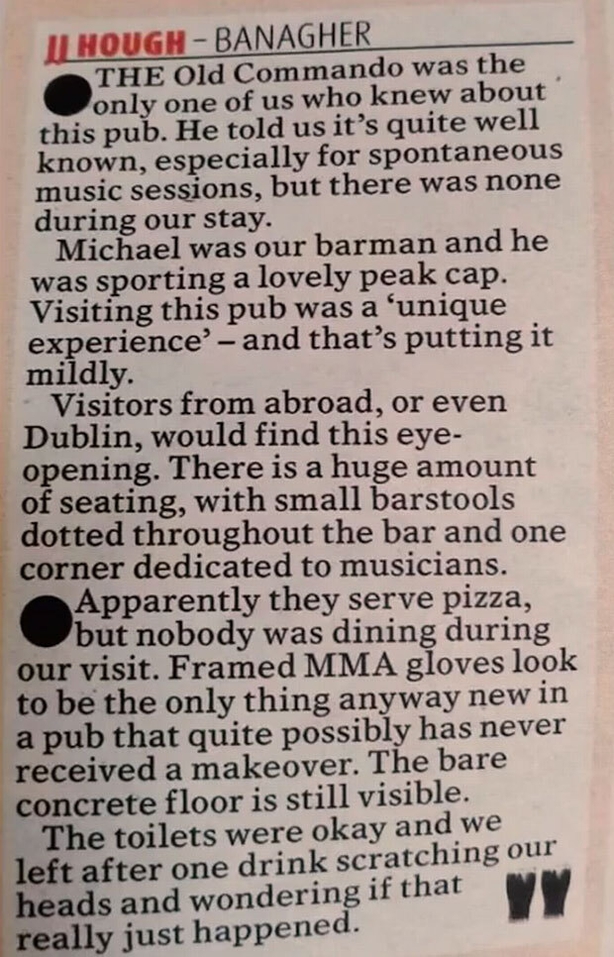 Owner Ger Hough decided to fire back at the review with a hilarious two-minute video in which they jokingly renovate the pub, pretending to smash the concrete floor, lining the walls in "lovely stainless steel" and breaking old treasures.

Posting the video to Facebook, owner Ger Hough said: "Recently, The Sunday World PubSpy 'Commandos' harshly reviewed us giving us two pints out of 5 and commenting 'framed MMA gloves look to be the only thing new in a Pub that quite possibly has never received a makeover. The bare concrete floor is still visible'.

"This ignores the fact that the Pub is a heritage site and protected structure, and the floor they refer to dates back to an old 14th Century Monastery."

The parody video has now been viewed almost 50 thousand times on Facebook and has had a very positive response from viewers, so it looks like JJ Houghs has had the last laugh.