The Best Picture blunder was the talk of this year's Oscars and will be forever remembered as the greatest mistake in Academy Awards history.

But that wasn't the only faux pas to happen during the night. We've documented all of the misses (and laughed hard) at those gem moments that went under the radar. Cue the memes, GIFs and new Whatsapp group profile pics!

Jedward have always been known for their outlandish style and boyband-worthy bouffants. The Lucan duo, who are renowned for their skyscraper quiffs (which they reportedly insured for a staggering €1 million), took to Twitter after Sunday's event to commend both Scarlett Johansson and Charlize Theron for copying their signature tresses. Their influence on the world really knows no bounds!

Denzel's reaction to Casey Affleck's Oscar win set the Twittersphere alight, with memes and GIFs galore making its way to the top of our newsfeed. The Fences star naturally looked gutted when he missed out on the top award and his lip-biting-turned-disappointed frown was captured for the world to see. Fingers and toes crossed for next year, Denzel!

You know it's real when an incredible actor like Denzel Washington ain't even trying to fake it #Oscars pic.twitter.com/EwYq8rIIVP

I would like Warren Beatty to reread the Best Actor winner please. #Denzel

Ryan Gosling proved himself, once more, to be the soundest guy in showbiz after the best picture blunder. The actor, who was nominated for his performance in La La Land, couldn't hide his mirth at the ridiculous situation, giggling behind his hand, before going on to congratulate the Moonlight producers and cast. He definitely isn't a sore loser!

Ryan Gosling's reaction is everything. this is why I love him so much, and he went straight to congratulate the moonlight producers/cast pic.twitter.com/9oBaAfymHD

It's not just Jennifer Lawrence who trips on the red carpet!

In fairness to Steep, she recovered like a pro and continued to strut towards the Dolby Theater like the goddess she is. Watch the little stumble (on repeat) below.

Keeping Up with the Kardashians (or not)

Momager and Kardashian matriarch Kris Jenner was left red-faced after questioning why a string of celebs were sporting blue ribbons. The embarrassing gaffe occurred during a live segment of her red carpet fashion commentary as part of E!'s red carpet coverage.

The ribbon worn by several stars to support the American Civil Liberties Union (ACLU) went over Kris' head, making for some awkward but entertaining viewing.

As Irish-Ethiopian actress Ruth Negga took to the red carpet, Kris blurted out, "What is that blue thing she has there?"

Video of Kris Jenner obviously having no idea what the ACLU is. This is... unbelievable: #ERedCarpet pic.twitter.com/Eg76PgAhpn

And the votes are in!

It was the biggest upset in Academy Awards, and the ultimate watercooler moment, when La La Land was wrongly announced as the winner of the Best Picture Oscar, when Moonlight actually had triumphed.

Director Seth MacFarlane made reference to President Donald Trump's unfounded belief that millions of Americans voted illegally in the election, joking that "millions of Academy members voted illegally", while M. Night Shyamalan, whose films are known for having twist endings, said "I wrote the ending of the Academy Awards 2017".

The award shock led some commentators to wish the same thing had happened during the 2016 Presidential election, with Billy Crystal tweeting: "Amazing ending. Wish that had happened on Election Day."

You know what the problem is -- millions of Academy members voted illegally.

I wrote the ending of the academy awards 2017. @jimmykimmel we really got them!

Actress Jessica Chastain summed up our feelings perfectly when she said she wished the Moonlight crew "had the full experience of winning best pic without the awkwardness of it all".

I'm also very sad for the MOONLIGHT crew. I wish that they had the full experience of winning best pic without the awkwardness of it all.

Justin Timberlake's rendition of his unstoppably catchy Oscar-nominated track Can't Stop the Feeling is pretty flawless. We can't help but feel that he was robbed in the best song category.

Midway through the performance, the showman delighted the audience when he broke into Bill Withers' classic Lovely Day, and walked into the crowd, shimmying with Halle Berry and giving Denzel Washington a high five, before having an adorable dancing moment with his wife, Jessica Biel. Couple goals alert!

If you're happy and you know it clap your hands (unless you are Nicole Kidman!)

The best picture upset may be dominating conversations on Monday morning, but Nicole Kidman's weird clapping also has people confused.

The Lion star demonstrated an unusual clapping technique at the awards ceremony, touching only her palms together, and of course Gifs have been abounding on Twitter. They're strangely hypnotic!

What on Earth is going on with Nicole Kidman’s clapping? #Oscars pic.twitter.com/YFraBODU1q

nicole kidman clapping like she just got finished polishing off an entire bag of flamin hot cheetos. pic.twitter.com/3aVLbnNETf 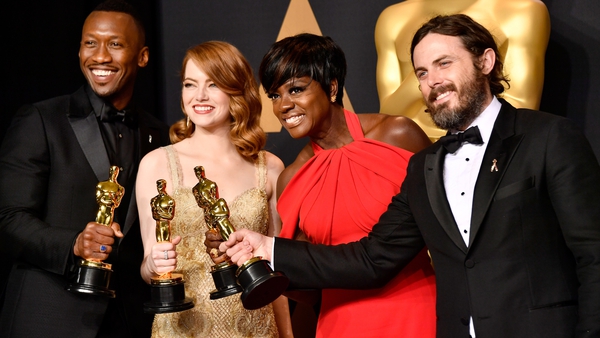 The stars & their statues - check out the winners!