Taylor Swift welcomed Ed Sheeran to the US with homemade apple pie.

The country singer had invited Sheeran out to California for a recording to session, and the pair, who became “fast friends”, decided to celebrate their collaboration with a dinner party.

Swift invited her friends around to meet the Small Bump hitmaker and served apple pie. Afterwards the musical duo ended up sitting on the kitchen floor for a jamming session. 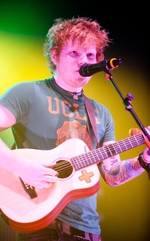 Swift told Capital FM: "We became fast friends, we became pals right away... It was so much fun because we had my friends over and we had this big dinner and we baked and we danced around the kitchen and he played us all this new music from the U.K that we hadn't heard before.

"At the end of the night we ended up getting out two guitars and sitting on the kitchen floor jamming and playing music - it was so fun. He didn't have much of a part in the actual baking process. We wanted him to have an American experience so we baked him an apple pie. Isn't that cute?"

Swift will release a duet she recorded with Sheeran, entitled Everything Has Changed, on her upcoming album Red.