Less than ten kilometres outside Listowel lies a simple structure that belongs to the first generation of modern Irish church architecture. The building is strikingly modernist, as is the artwork inside, but the young architect also reached back into the Hiberno-Romanesque ecclesiastical tradition.

Corpus Christi church in the village of Knockanure, near Moyvane, in North Kerry was regarded as a break with traditional church architecture and a modern fit-for-purpose design. This chapel of ease was commissioned in 1960 and its opening and blessing took place on 21 April 1964. Michael Scott of Michael Scott & Partners (later Scott Tallon Walker Architects) won the commission to construct the new church, with partner Ronald 'Ronnie' Tallon (1927 – 2014) designing it. Tallon would then establish the philosophy of the practice for the inclusion and integration of artworks in their buildings.

The Lightness of a Concrete Slab Roof

Corpus Christi is a Roman Catholic church in the International Modern style. It expresses a very simple concept: an open, unified space, like a temple on a podium, overlooking the valley of Knockanure. It is a double-height, flat-roofed, single-cell with four-bay side elevations. To the south-east side of the church is a freestanding iron belfry, built c. 1965, possibly incorporating the bell of earlier church. The most beautiful feature of the design is the church's clear span, with its concrete roof, a series of T-beams cast in-situ, delicately floating in space above a transparent glass wall. This diffuses light through the interior and helps to express the quality of the board-marked concrete used in the shuttering for the beams. 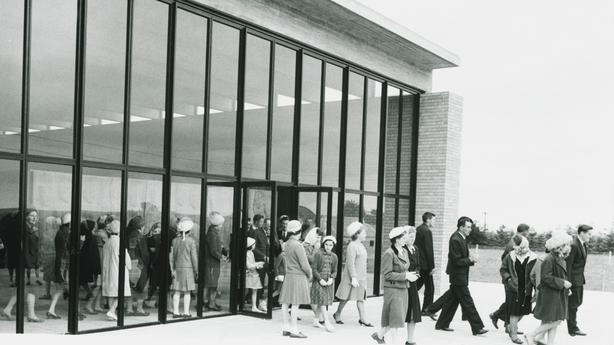 The church has an expansive feeling with its metal framed glazed screen walls and framed clerestory windows between the beams of the roof. Stepping through the double doors, hidden within the glass façade, one enters a single volume interior with a concrete flagged floor and buff-coloured concrete brick side walls in English bond with a carved screen forming porch, plastered screen as reredos and half-height timber partitions to sacristy and offices. Inside the altar, lectern and font are not lavish marble or mahogany but rather polished limestone. 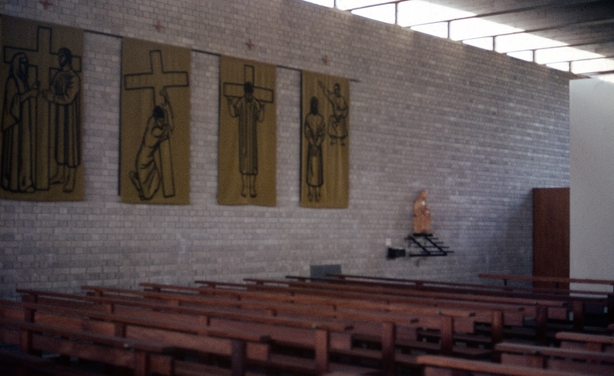 The concrete paving of the podium is carried through the church, visually linking exterior with interior spaces. All elements of the church – such as the reredos wall behind the altar, and the entrance screen containing the confessionals – are freestanding in the space. The reredos wall is a concrete-block wall plastered and painted white as a contrast to the concrete brick walls of the nave. The vestry and sacristy are housed behind 8ft (244cm) high teak panels and are expressed as screens within the volume of the church. The entrance is screened by a freestanding box-like structure which contains two confessionals and a shrine facing the altar. This structure is clad with eight panels of teak, carved in bas-relief by Oisín Kelly, depicting The Last Supper. Outside, the steel belfry stands separated from the church on the podium, and is constructed with four rolled steel sections as columns supporting the bell. 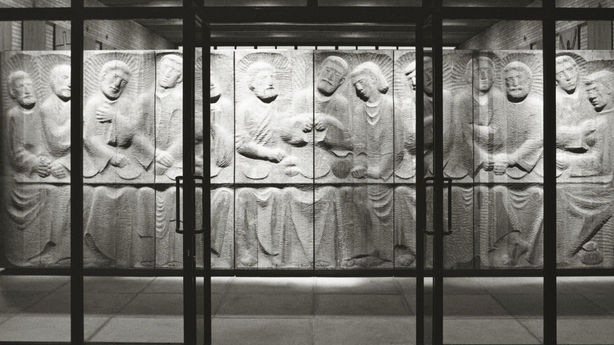 The church contains some of the most important and emotive works of religious art from the nineteen-sixties. These include the Last Supper panel by sculptor Oisín Kelly (1915 – 1981), a wood sculpture of the Madonna and Child by German-Irish sculptor Imogen Stuart (b.1927) and the Stations of the Cross wall hangings by Leslie MacWeeney (b. 1936), which sit over special acoustic absorption panels. Leslie MacWeeney enrolled in the National College of Art and also represented Ireland at the Paris Biennale in 1959 and 1961. She developed a connection to the Yeats family and The Cuala Press of the Yeats sisters (Lillie and Lolly) by serving as secretary to Anne Yeats (daughter of William Butler Yeats). She also assisted in cataloguing the papers of Jack Yeats, the brother of W.B. Yeats and his sisters. In 1960, MacWeeney helped found The Graphic Studio Dublin along with Patrick Hickey, Elizabeth Rivers, Liam Miller and Anne Yeats. She relocated to Boston, United States in 1972. 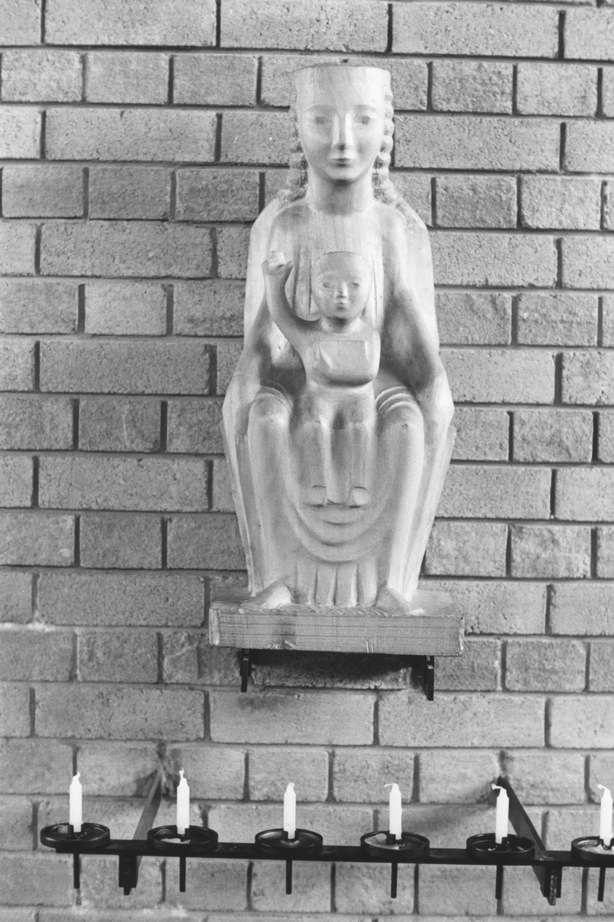 'Irish Romanesque churches… were remarkable for their small size, extremely simple plan, rich and delicate decoration, giving a shrine effect which, at that time, had almost disappeared elsewhere. They were of single-chamber construction, with massive side walls projecting beyond the front and back façades the cross-walls including the façades were left as open as possible and were developed as a series of arched screens... It is fortunate that parts of many of these churches have survived, a typical example being the façade of St Crónán's church, Roscrea. 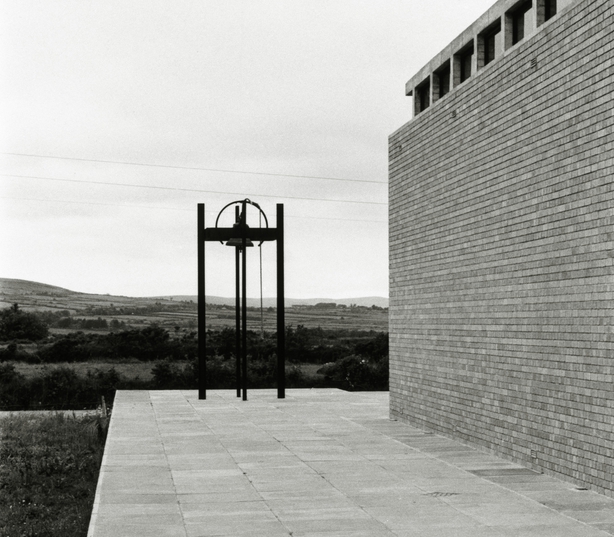 'A church that would bridge the gap in history and carry on the beautiful tradition of the twelfth-century Irish Romanesque, where the mason and artist worked together in the materials of their time, reflecting the history and skills of the people (1)'.

Thanks to David Flannery, Emer Grant, SarahJane Lee and Jillian Southern of STW Architects for their help with this piece and Sam Moore, Jonathan Neilan and Aline Oliveira. 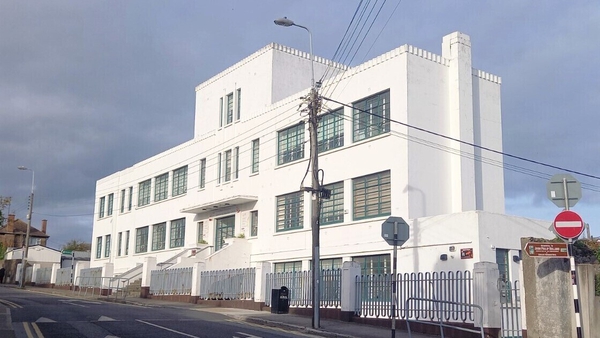 100 Buildings: Why Drogheda's 'Old Tech' is a geometric delight