A bravura compression of James Joyce's masterpiece into five minutes... For Sunday Miscellany on RTÉ One, listen to Five Minute Ulysses by Joseph O'Connor, recorded live at the Pavilion Theatre above.

James Joyce. Yes. Bloomsday. Yes. And the people who like him, they gather to bless, and come mess, and indeed they Yes, I confess. And he wrote in the stream of consciousness, Yes, where you don't say 'Your woman did this and then left,’ or ‘Your man moseys in and says he to the room,’ but Bloom, that’s the hero, you’re inside his head, and you’re sailing the seas of his marital bed, or wherever you’re led, by the thoughts that go drifting and shifting in his Yes, as he saunters the city of Yes. And he glancing at motts, and he getting the hots, and he looking at the sky with his roving aye-aye, and he bumps into neighbours, performing his labours, all on a Dubbalin daze.

And the words like birds. Confetti-fall of language. And the slang and the Yes and the porter in the taps. And the Sandycove talk. And the Sandymount walk. And the sandwich and a jar. In Davy Byrne's bar. And his memories mingle and jingle in his pocket and tinkle old songs of the Yes. And the day does be boilin’ like Blazes. Yes. And the bells and the smells and the apples and the chapels and the hope and the sweet Lemon soap. And Stephen, who don’t be believing in God, and he single and free and fresh back from Paree, and his dad is a beast and his mam is deceased, but here at the end he encounters a friend, in the kips where the lips of the ladies of the night do be calling like summertime sirens.

And what’s the book about? Well, itself, I suppose. And yourself and myself and herself down the road. All you lads and all you lasses. Ulysses. His missus. See, she’s called Molly. At home in her bed and there’s thoughts in her head, and some of them shrewd and some of them rude, and some of them flirty and some downright… Yes… and food for the forehead in a novel he borrowed called Sweets of Sin or something.

Summarise Ulysses? No bother at all. It’s Normal People in Edwardian costume.

Listen back to the Sunday Miscellany Ulysses 100 special here. 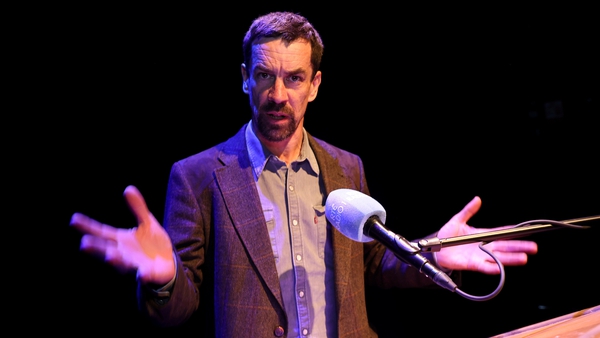