As they announce an Irish tour for October and November, Vagabond Diamuid MacGloinn revisits the making of Nine Waves.

Making Nine Waves has been a different kind of journey for us. We had to work apart from each other in a way we had never done before.

When we met up in March 2021, to share the ideas we’d been sketching out, we were able to surprise one another. It was such a buzz after so much time apart to come together and create something new. That energy carried on into the studio because we hadn’t toured the songs at all. We weren’t tired of them in any way and that was before we’d even added in the other parts. It was also the first time in years that we’d given time to working on original songs.

The return to writing and playing our own songs feels really good. It’s the right time for it and something people can expect to hear more of in our future recordings and shows. We wanted to create a world in which these songs could live, to bring together the traditional and the original elements in a way that felt natural.

Inviting some of our favourite musician friends to join us on this album was a dream-like experience because that world took shape almost effortlessly. We were able to give really vague cues and suggestions and they all just got it. Listening to these still newly formed songs, shifting and changing again over the course of the days we spent in studio, under the wizard-like guidance of John 'Spud’ Murphy, was pure joy.

It's also been a new experience releasing so much material that we haven’t played live yet. The first time most people get to hear these songs, they’re probably listening to the recordings on the album. We wrote some of these songs at a time when we could neither sing in a room full of people nor sit into a session and play a few tunes with our buddies. That had an effect on the way we wrote. We were longing for that feeling of singing together so we leaned into repeated choruses that people could join in on. It just felt right. And then it also felt very natural to develop our musical collaboration and friendship with Cormac Begley by bringing him in to play on the two sets of tunes we recorded. The handful of gigs we played with Cormac during 2020 provided a much needed outlet for pent up tune-playing energy.

What an absolute treat to hear @yevagabonds play tonight! One of the best gigs I've been to (and the first since early 2020!) Was also over the moon to see Cormac Begley on stage with them too! Sár-jab bhaineas ana-ana-shúp as 💙 pic.twitter.com/OSVhIw2nzb

Touring these songs has, so far, been amazing. The crowds seem to really get it. They’re listening to and singing along with the songs and getting a bit more lively for the tunes. It feels like people are really ready for all of the above. People want to sing along and have a laugh and maybe even a little cry and we’re looking forward to more of that ourselves. We all need it and we deserve it too after everything that we’ve been through. Sure that’s what it’s all about.

Nine Waves is out now, via River Lea. Ve Vagabonds play dates nationwide this October and November, kicking off on October 19th at The Spirit Store in Dundalk - find out more here. 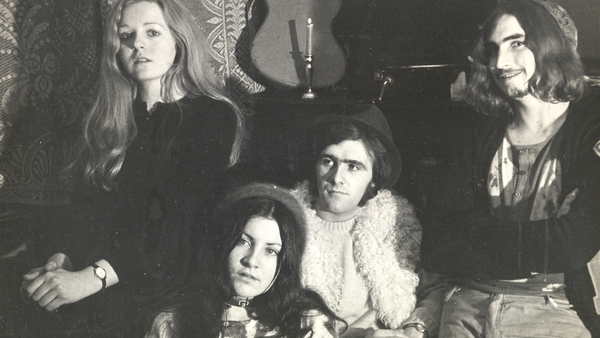 The Lyric Feature: Swaddling Songs at 50 - the story of an Irish acid folk classic