One of the best ways to conserve a building to ensure its continued use, often by repurposing the building, as with Athy Library, which started life as a house of God.

Dominican priests have celebrated Mass in the town of Athy in County Kildare since the thirteenth century. The Dominican Priory was formerly Riverdale House near the Barrow River, the private residence of the Mansergh Family. It was purchased by the Dominicans in 1846 and adapted for use by the Dominican Order between 1846 and 1850. 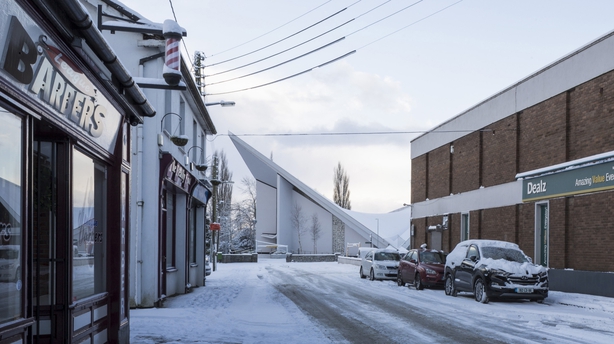 While Prior of St Saviour's Church in Limerick city, Father Philip Pollock (1914 – 1978) met and commissioned local architect and civil engineer John Thompson (1917 – 1988) to design a chapel dedicated to St. Martin de Porres. Thompson had established his practice as John C. Thompson & Co in 1947, which is still going strong today as Thompson Architects. Their association was renewed when Fr. Pollock came to Athy and set about planning a new church to replace the small Gothic building which had served as the Dominican Church for the previous 150 years or so. The two men travelled much of post-war Europe gathering inspiration for a modern church that would express the principles of Vatican II. Fr Pollock worked tirelessly to collect funds for the new church and made many fundraising trips to America. 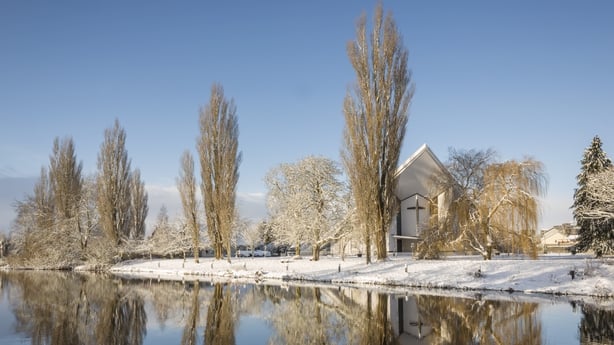 The result of their journeys was the construction of St. Dominic’s Catholic Church terminating Convent Lane – a building so remarkable that it has become an Athy landmark. The most striking feature of this church is its roof, which grandstands the remarkable plasticity and strength of concrete, sometimes called 'liquid stone’, and which may well have seemed to some of the first parishioners that it was held in place by the hand of God. The freestanding parabolic roof meets the ground and sits on a wedge-shaped plan. Its apex reaches a level at 75.96m at one end and 69.15m at the other with a span of almost 48 m between the abutments. The walls were constructed after the completion of the roof as it was expected that the roof would move up and down with changes in temperature. 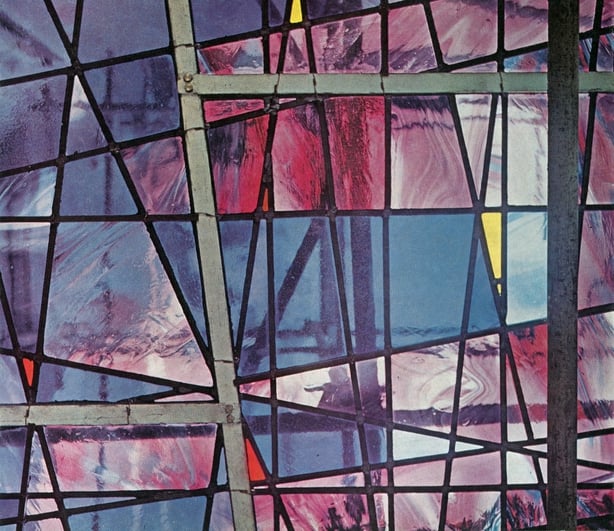 The colourful, abstract stained glass is by George Campbell R.H.A (1917-79) of Abbey Stained Glass Studios. He was one of the founders of the Irish Exhibition of Living Art in 1943 with high profile commissions such as the stained glass for Galway Cathedral (1965). After two years from design stage the Dominican Church opened on St Patrick’s Day 1965.The Irish Times of 18 March 1965 claimed ‘yesterday Athy took its place amongst the most up to date towns of the world when its ultra-modern Dominican church was blessed and opened.’

Inside the space is largely open plan, devoid of pillars, partitions, and barriers separating the congregants from the sanctuary. Light from the stained-glass reflects across the white painted timber ceiling. Lighting was originally a series of a trio of brass, pendant lights with white cone-shaped shades. The panel on the altar depicting The Deposition was by Cork-born artist Breda O'Donoghue Lucci. 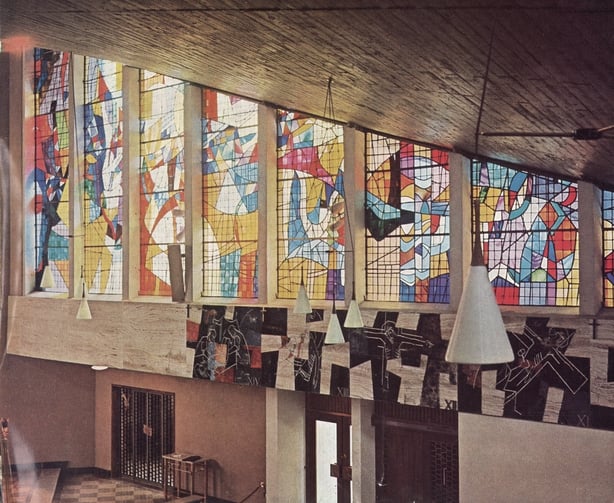 The floor of the church was delicate, small floor tiles while the sanctuary is chequered marble. Unusually, the seating was individual fibre-glass seats mounted on metal frames which also had central heating rather than wooden pews. Another unique feature is that the stations of the cross, also by George Campbell, are one continuous frieze, the porous surface of its travertine stone giving a weathered appearance with warm earthy tones of ivory and cream veins. The simple crucifix was executed by sculptor Bríd Ní Rinn (b.1936). 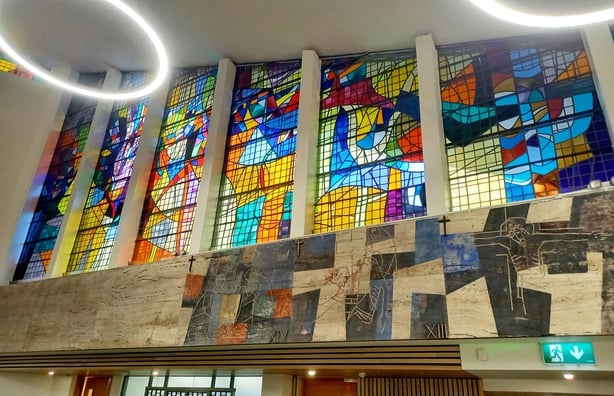 On Sunday 22 November 2015, the Dominican church celebrated its last Mass. The building was then deconsecrated, but did not lie dormant for long as it was adapted to become the Athy municipal library. Reddy Architecture + Urbanism carried out the refurbishment which included new staff areas, public toilets, storage areas, communications room, and meeting area. The contractor was Duggan Lynch Ltd. The floor tiles were replaced by carpet and lighting updated with ring pendent lights like a congregation of halos. As a secular building the figure of Jesus was removed from the crucifix which still remains in place. The church was reborn as Athy Community Library, with the official opening on 3 May 2018. 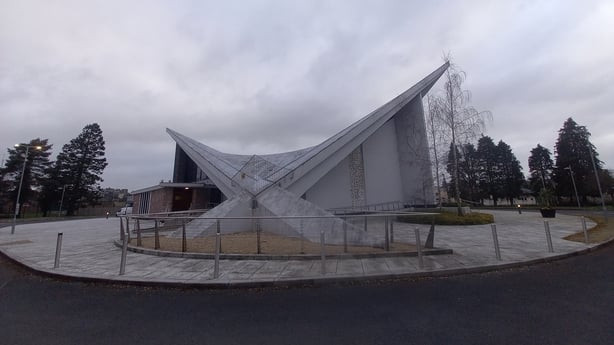 This building, with its extraordinary roof, is placed on Kildare’s Record of Protected Structures. Like a church, a municipal library is a civic space, and whether you are spiritual or not, the artwork and craftmanship of this building is joyous and should be celebrated.

Special thanks to Finola Thompson and Thompson Architects for information on the architect and church. 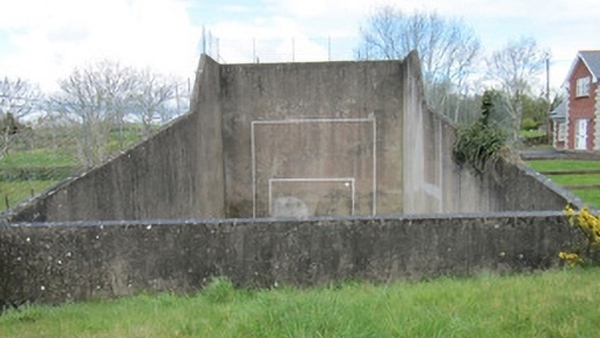 100 Buildings: A Monaghan handball alley, an unsung monument to Ireland's past 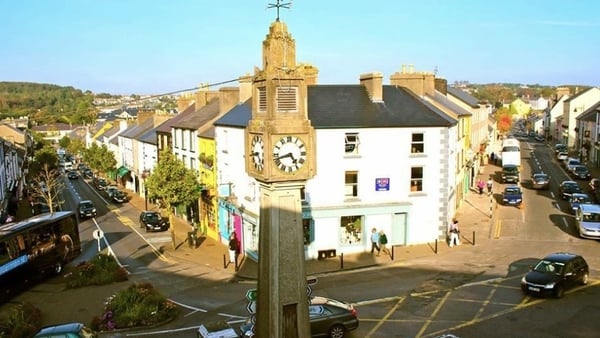