Via The Journal Of Music: A round-up of new and recent music books including studies of singer Colm Ó Caodháin, music collecting in the Aran Islands, and music in Irish film and television, as well as a collection of essays on Brian Boydell and an exploration of the Donegal fiddle tradition.

Colm Ó Caodháin: An Irish singer and his world

Colm Ó Caodháin was a singer, storyteller, musician, lilter, whistler and dancer from Glinsce, west of Carna in Conamara, Co. Galway. Born in 1893, he was the eldest of nine children, and received most of his songs from his grandparents on his father's side. In the 1940s, Ó Caodháin became the main contributor or informant to the collecting work of Séamus Ennis for the then recently established Irish Folklore Commission (IFC); the two also established a firm friendship, although there were over twenty-five years between them. Liam Ó Coisdeala of the IFC collected a large repertoire of tales and religious lore from Ó Caodháin, and the Conamara singer was also recorded by Alan Lomax, appearing on the 1955 LP The Columbia World Library of Folk and Primitive Music – Volume 1: Ireland. This recent book by Ríonach uí Ógáin, former Director of the National Folklore Collection, includes a translation of Ó Caodháin’s own account of his youth, and a chapter discussing 33 recordings made by Ó Caodháin, all of which are included on a CD that accompanies the book. There are also chapters on personal lore, local custom and belief, and tales and rhymes. Colm Ó Caodháin: An Irish singer and his world follows uí Ógáin’s previous books focusing on the collecting diaries of Séamus Ennis, Mise an Fear Ceoil: Seamus Ennis – Dialann Taistil 1942–1946 (2007), and its English translation, Going to the Well for Water: The Séamus Ennis Field Diary 1942–1946 (2009). With this new work, as the title suggests, we have an even deeper insight into the world of an Irish singer in the mid-twentieth century.

Collecting Music in the Aran Islands: A Century of History and Practice

The author of this work, ethnomusicologist Deirdre Ní Chonghaile from the Aran Islands, writes that this book 'is the first to discuss Irish traditional music, or any genre of music, in Aran.’ That indicates its importance. Collecting Music in the Aran Islands discusses four different collections made between the 1850s and the 1970s, specifically, the music manuscripts of George Petrie and Eugene O’Curry collected in September 1857; the songs collected by Séamus Ennis over two weeks in August and September 1945; the recordings of the American collector Sidney Robertson Cowell made in 1955 and 1956, some of which were issued on her 1957 Folkways recordings Songs of Aran; and the recordings made by Aran Islands native Bairbre Quinn (the author’s aunt) between the 1950s and 1970s.

The chapter on Ennis provides a critical analysis of his collecting, its strengths and weaknesses, and when combined with Ríonach uí Ógáin’s books (mentioned above), and Nicholas Carolan’s essay on the Alan Lomax collection that accompanies the recently released double CD The New Demesne, we are getting a much more nuanced picture of Ennis’ collecting work through modern scholarship.

The chapter on Cowell is the longest in the book and provides an intriguing account of this independent collector. Ní Chonghaile writes that Cowell created ‘a collection of sound recordings, writings, and photographs that is pioneering and little known in the field of Irish traditional music.’ She adds: ‘her recordings and papers in Washington, DC, and in New York have remained, until now, largely untouched by any Irish music researchers. Sidney’s independence appears to have pushed her to the margins of Irish memory.’

It is likely that Cowell’s presence on Aran in the 1950s prompted Bairbre Quinn (1935–1987) to start her own collection. A collector and recordist, her collection amounts to 44 tapes amounting to 32 hours, documenting performances in Aran and Conamara. They include forty-eight sean-nós songs, accordion playing, lilting, whistling, ballads, comic songs, country songs, contemporary releases, and showband songs, illustrating the changing musical milieu in the middle of the twentieth century on Aran. Collecting Music in the Aran Islands is a fascinating insight into nearly 120 years of musical culture on the Aran Islands.

Spanning 120 years of cinema history, Music, the Moving Image and Ireland, 1897–2017 is a study of music from Irish-themed and Irish-produced, or co-produced, films. The book also considers newsreels and television from the mid to late twentieth century, as well as music and sound design for independent Irish features from the 1970s to the 2010s. John O’Flynn’s book has three aims: to map out this relatively unexplored field of study, to interpret the history of Irish and Irish-themed music in film and television, and to analyse selected scores and soundtracks. The book covers a wide range of films and music, but among the composers discussed are Max Steiner, William Alwyn, Elmer Bernstein, Seán Ó Riada, Brian Boydell, A.J. Potter, Gerard Victory, Seóirse Bodley, John Buckley, Roger Doyle, Mícheál Ó Suilleabháin, Bill Whelan and Shaun Davey. The author is Associate Professor of Music at Dublin City University and previously published The Irishness of Irish Music (2009) and co-edited with Mark Fitzgerald Music and Identity in Ireland and Beyond (2014).

Creative Impulses, Cultural Accents is a collection of 15 essays on the composer (and painter) Brian Boydell (1917–2000). It follows previous works focusing on the artist such as The Life and Music of Brian Boydell (2004) and Rebellious Ferment: A Dublin Musical Memoir and Diary (2018). Edited by Barbara Dignam, Assistant Professor in Music at DCU, and Barra Boydell, Emeritus Professor of Musicology at Maynooth University (and the composer’s son), the book is divided into two parts, ‘Boydell as Composer’ and ‘Boydell as Contributor to Irish Musical and Cultural Life’.

Part 1 features contributions from Joseph J. Ryan on the composer’s ‘searching for a personal voice’ through his music, particularly his string quartets; Axel Klein with an essay on Boydell’s orchestral music; Shauna Louise Caffrey with a study of the three-movement orchestral masque Magh Sleacht (1947); an essay by Laura Anderson on his scores for documentary films; Aylish E. Kerrigan discussing his songs for low voice; Philip Graydon on the song cycle The Feather of Death (1943); Clíona Doris on his work for solo pedal harp A Pack of Fancies for a Travelling Harper (1970); and Mary Louise O’Donnell on the musical collaborations of Boydell and harper Gráinne Yeats.

Part 2 includes essays by Kerry Houston on Boydell’s work as professor of music at Trinity College Dublin from 1962; Ita Beausang on his musicology; Teresa O’Donnell on his work with the Music Association of Ireland; Barbara Dignam on his early broadcasts for RTÉ radio; Peter Murray discussed his work as a painter; Ellen O’Flaherty with an archivist’s perspective on his papers at Trinity; and an essay by Niall Doyle on Boydell’s legacy and related contemporary issues, titled ‘Music, Advocacy and Activism: Music in Irish Life and Culture’.

Creative Impulses, Cultural Accents is a comprehensive introduction to the composer, particularly for new generations as his music is seldom performed today, although Mary Louise and Teresa O’Donnell recently released an album of his works for harp. In the final essay, Doyle describes Boydell as ‘one of the greatest advocates, activists and achievers in music in Ireland in the twentieth century’. His skill was that he didn’t just advocate, he took action. Doyle quotes Boydell as once saying, ‘Some people attempt to do an awful lot of things … whereas others just go absolutely bang onto one thing and perfect it. Well, I am in the first category… if I had my life again, I would do exactly the same.’

Between the Jigs and the Reels Revisited – The Donegal Fiddle Tradition

Between the Jigs and the Reels Revisited is a revised edition of Caoimhín MacAoidh’s book, which was first published in 1993. As with the first edition, the foreword is by Tommy Peoples, and it may be the last written words of the renowned fiddle-player as it is dated June 2018 and he died two months later. MacAoidh’s book provides a history of Donegal fiddle music and chapters on fiddle folklore, music collections and dancing, which are followed by sections discussing the music and musicians of different parts of Donegal, and chapters on travelling fiddlers and the diaspora. At 400 pages, this is a deeply researched book with sections on many well-known musicians from the region, including Neily Boyle, the Glackins, the Ó Maonaighs, Dinny McLaughlin, the Dohertys, the Peoples family, the McGinleys of Raphoe, the Gillespies, the Harper family, the O’Rourkes of Ardara, the Campbells, the Byrnes, John Gordon, fiddlers of Glencolmcille, and other musicians who have been influenced by the Donegal tradition. It also includes reference to many musicians of the new generation. An encyclopaedic work for all those interested in the richness of this north-western instrumental tradition.

Read more from The Journal Of Music here. 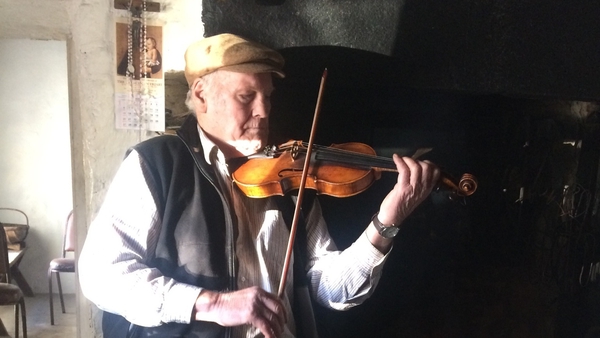