'I have spent many years trying to understand the true differences between Catholics and Protestants...' Acclaimed Belfast playwright Gary Mitchell introduces Tubes, his new play for RTÉ Drama On One. Listen to Tubes above...

To the rest of the world it seems the difference between Catholics and Protestants in Northern Ireland is, Catholics have nothing; Protestants own everything. I grew up in Rathcoole, where the play is set, and we had nothing. I only knew one person who owned a car, legally. So, it was a shock to me when I left Northern Ireland and saw it through the eyes of others. Especially when it became obvious, as far as the arts' world was concerned, we were the bad guys.

Movies, plays, songs, were and still are romanticizing the plight of poor Catholics and denigrating the Protestant people as evil landowners. I never owned land in my life and every Catholic I met had more money than me. What’s wrong with this picture?

I have spent many years trying to understand the true differences between Catholics and Protestants and all I've come up with are two very subtle things. Firstly, as far as I understand, Catholics have one church, two political parties and two paramilitary groups to choose from whereas Protestants have Presbyterian, Free Presbyterian, Methodist, Baptist, Congregational, Church of God, Pentecostal, Evangelicals and if you don’t fancy these you are free to set up your own church. Politically; DUP, OUP, UUP, TUV, PUP, UDP, IUP and if you don’t vote for any of these you are free to set up your own political party and many people do. Even paramilitary groups are numerous, UDA, UFF, UVF, RHC, YCV, LVF and let’s not forget all the renegade groups and of course, if they are not murderous or racketeerious enough for you then you can start up your own and many do.

Catholics often seem more united, unified in most aspects of society that I’ve experienced, whereas Protestants seem to be searching for individuality.

Listen: In the Wings - actors Eleanor Methven, Micheal Liebmann and Gerard McCabe speak about their work on stage, screen and on air and working on Gary Mitchell's Tubes for Drama on One

Catholics often seem more united, unified in most aspects of society that I've experienced, whereas Protestants seem to be searching for individuality.

Where better to show off individuality or originality than in the arts, I thought, but through my own experiences, it seemed to be the opposite, and this is the other difference. Watching Catholics work and play, getting access to their families and inner circles has been revealing. Every time people are gathered, a guitar would be produced out of nowhere, a violin, a drum, a pipe, a harp, an instrument I’ve never heard of, a random family member bursts into song… and no matter what level of talent was on display the majority applauded and were entertained and the evening continued into the wee small hours. On one such evening, I witnessed a pub being raided by the Garda and one officer approached me and said, 'Blow into this’. It was an harmonica. And the party got more rumbunctious than before they arrived.

By contrast as a teenager, when I pulled out a guitar I was instantly heckled and frequently berated, ‘Turn that crap down or better still, off completely’. In their defence, I wasn’t good.

And so, I wanted to write a play that would highlight the frustrations of a modern young protestant, dealing with his own community’s inability or unwillingness to show themselves in a positive light and how dangerous it is to try to do it on their behalf. It is akin to taking a job promoting tourism for Murder City.

Drama On One: Tubes, RTÉ Radio 1, Sunday January 22 at 8 pm - listen to more from Drama On One here. 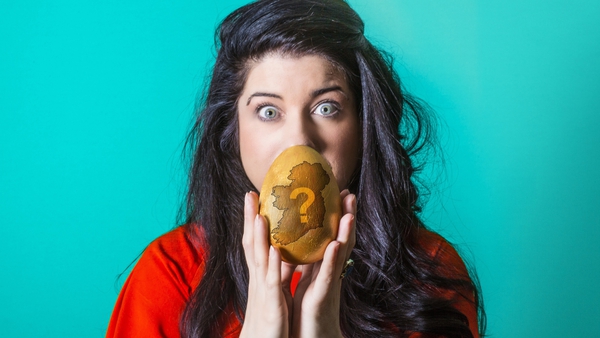 Eggsistentialism - Joanne Ryan on her Drama On One play