The Narrow Gate of the Here-and-Now celebrates IMMA's 30th birthday with a major museum-wide exhibition showcasing the IMMA Collection and the history of the Museum since 1991. Presented in four Chapters, each one explores specific themes within IMMA’s 30-year history.

The present is a moment in time when we decide to lower our expectations of the future or to abandon some of the dear traditions of the past in order to pass through the narrow gate of the here-and-now.

The Narrow Gate of the Here-and-Now celebrates IMMA's 30th birthday with a major museum-wide exhibition showcasing the IMMA Collection and the history of the Museum since 1991. This is the first time that the entire museum has been given over to a display from the Collection. The exhibition includes more than 200 artworks, and the reach of the artistic representation is global, from Mexico, South Africa, Pakistan, Thailand, Canada and elsewhere; right through to work made by community groups from Inchicore and Tallaght. The exhibition is divided into four "Chapters", each one using a particular lens through which to read the IMMA Collection.

Chapter One, Queer Embodiment maps the context for the project, reflecting on the dramatic changes that occurred in Irish legislation over the last 30 years, such as the decriminalisation of homosexuality (1993), provision of divorce (1996), marriage equality (2015) and the repeal of the Eighth Amendment (2018). These moments in the struggle for human rights find echoes across the globe, as grassroots movements continue to contest the impact of the State on the body. The Collection reflects a strong history of feminist practice, particularly by Alice Maher, Cecily Brennan and others, relaying the defiance of women in Ireland against Church and State oppression; queer histories that capture moments of resistance and joy, as well as presenting the devastating effects of HIV/AIDS, seen in the work of Derek Jarman, Billy Quinn and the 'Names Project, AIDS Memorial Quilt’. While many of these changes have built a more compassionate society, some of the artists such as Vukašin Nedeljković and Anita Groener engage with troubling issues, such as Irish citizenship and migration, which remain unresolved.

Chapter Two, The Anthropocene, considers the present geological era in which human activity has become visible as a dominant and destructive influence on the Earth’s systems. It goes beyond a focus on melting glaciers, rising sea levels and eco-friendly practices to consider how globalisation, pandemics, colonial histories and the displacement of indigenous peoples are also key elements of the Anthropocene. These themes are seen in the work of artist and educator Leanne McDonagh, the first Irish Traveller whose work is included in the IMMA Collection; and the Karrabing Collective, an indigenous media group from Northern Australia whose work tackles cultural and environmental issues around settler colonialism.

Chapter Three, Social Fabric focuses on how artists have used textiles as a space of agency, resistance, and activism. Included are works by artists Ibrahim Mahama, Kathy Prendergast and the ‘West Tallaght Group’, who address how textile materiality has been used as a vehicle for interactivity and a collective voice, at times reflecting peripheral communities; and how the sometimes negative rankings of domesticity, ‘women’s’ work’ and the ‘tender crafts’ have been harnessed to create agency. This is expanded through a consideration of the interconnectedness between textile production, the development of computers and other contemporary digital technologies.

Chapter Four, Protest and Conflict celebrates how artists like Theaster Gates, Shane Cullen, and Helen Cammock have utilised protest as a dynamic act of resistance and assertion; subverting power while surrounded by turmoil and conflict; documenting shifting narratives linked to the creation of the world wide web and the digital dissemination of information and disinformation. It contains multiple artistic perspectives on the conflict in Northern Ireland as well as narratives of political unrest further afield.

All four chapters of The Narrow Gate of the Here-and-Now are now available to visit at IMMA - admission is free, book your tickets online here. 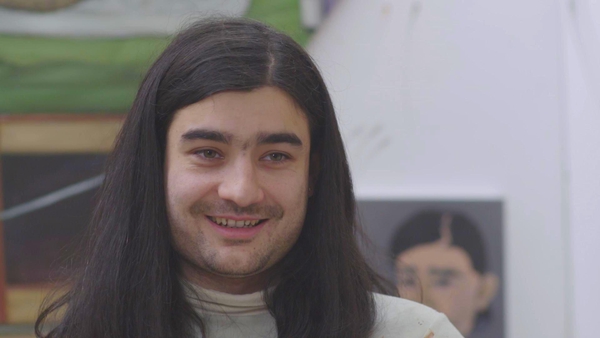